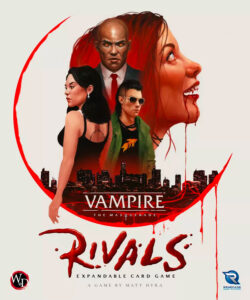 Vampire: The Masquerade – Rivals is an expandable card game for 2 to 4 players that takes around 45 minutes to an hour to play depending on the number of players.

Each player takes control of a specific group of vampires and take to the street of San Francisco to become the ruler of the vampires of the city. Each player does this by attacking rival vampires, playing schemes, and exerting political influence among the vampire clans.

Vampire: The Masquerade – Rivals includes 4 decks, one for each player that represents the different vampire clans in the San Francisco area. After each player chooses their deck, they separate it into 4 different piles: the library (abilities, schemes, and conspiracies), faction deck (your recruitable vampires), your haven (home base), and your agenda (win condition).

The other major piece of gameplay is the city deck. This deck is in the center of the play area and contains mortals for vampires to feed on, events that affect gameplay, and antagonist enemies that hurt each player and must be dealt with.

Each deck has a vampire leader that starts in the haven. Each player draws their opening hand which includes one vampire from the faction deck and then play starts with the first player.

On their turn, players will get to take 2 actions mainly consisting of attacking things with vampires, or enacting schemes and conspiracies. To recruit vampires you need to pay a prestige cost (your currency).

The goal of the game is to either kill all rival vampires or to reach 13 influence by utilizing title cards and your decks agenda.

The first game I played I got to play the Brujah faction against the Malkavian clan. Right away I saw how the Brujah were physical and combat focused. I had a lot of abilities in my hand that allowed me to make enhanced physical attacks. This allowed me to be hyper aggressive throughout the game.

My opponent’s Malkavian deck focused on a card type called conspiracies. These cards are played faced down and only shown to players the owner wants to directly involve. In a two-player game, my opponent refused to involve me, making me decide whether I wanted to sink resources into something that might have not even benefitted me. This put me into an interesting situation as I was either punished for not blindly contributing or I helped which pushed the Malkavians closer to victory since it accomplished the item on their agenda.

In another game, I was able to play the Toreador faction against the Ventrue clan. My deck focused on amassing resources faster and stealing them from my opponent, while my opponent was more focused on gaining titles and utilizing them to meet their agenda requirements.

Both games started slow and began to ramp by turn 3. There were a couple of great mechanics that really made Rivals stand out more than some other card games I’ve played recently.

The first was the city deck. Each turn you get to turn over a city card that may have some mortals to eat, some enemies that are going to fight back, or a special event that can modify the battlefield. Mortals have an interesting mechanic that when defeated you can eat them to heal or attach them to the attacking vampire as a retainer and receive some awesome benefits. In some of our games, the Special Affairs Division cards made an appearance disrupting our fight against each other as we had to focus on destroying them before their damage stacked too high and started killing off our vampires. This was one of the few times we had to decide whether to set aside our current plans or take the damage and keep the assaults focused on our opponents.

An aspect that we really enjoyed was being able to move vampires in and out of the haven to allow them to take a rest. When you have vampires in the haven it keeps them relatively safe unless an opponent gathers enough intel to attack them. This can be done on their own or by making deals with other players to get them to provide the intel/resources for an attack. When in the haven, it stops you from hunting in the streets or attacking other vampires. Knowing when to move in and out of your haven has a massive impact on keeping your vampires alive and being able to dole out punishment to those wreaking havoc in the street section.

The conspiracy and scheme cards in different decks added a secret bidding aspect to the game. While in two players this only had a small impact, in a 4-player game these cards could easily cause some shifting loyalties. Generally, conspiracies have players contributing towards something that will majorly benefit the user and not them, while schemes are questions posed to all players and to commit to a yes or no answer, they must use influence from their different vampires to determine the final resolution. Rivals does a great job implementing mechanics that allow for backstabbing and power shifting.

Each game we played we found ourselves making multiple decisions that had a massive impact on gameplay. Knowing when to recruit vampires or keep drawing from your library could make or break a turn. We felt that the city deck creates a great random world backdrop. At one point I decided to keep taking damage from the special affairs division to press the attack hard onto my opponent which ended up helping me win.

Vampire: The Masquerade – Rivals is a fun card game with ready made decks and great interactions. There are multiple bidding mechanics mixed in with really streamlined combat that allows for a mix of gameplay styles that players can truly customize to their gaming style. The city deck throws in resources and twist that significantly impact the game. The mechanics in Vampire: The Masquerade – Rivals stick close to the theme of Vampire the Masquerade and fans of that setting will feel right at home playing the game. Newcomers will pick up on the setting and mechanics quickly allowing for a fun gaming experience. While still fun at 2 players, I think this game will excel with 4 players.

Score 4 Stars – A great deck building game with unique mechanics and a huge amount of synergy and interactions.

Misses:
• Some missing mechanics with 2 players
• May take a couple of games before feeling comfortable customizing
• Hyper aggression can be a little tough to counter