We review the digital version of Unmatched from Acram Digital and Restoration Games. You can now play the Unmatched skirmish game digitally going up against an AI or other players. 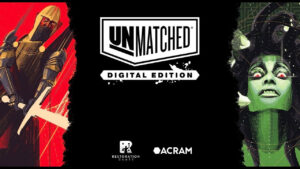 When the pandemic hit (you remember that whole thing right?), all gamers were left scrambling for ways to play their favorite tabletop games remotely and, on different, socially distanced tables. For my part, I came up with clever ways to remote-play games like Just One and Flamme Rouge.

But Unmatched—a game that I didn’t even own at the time—became my favorite choice in the Zoom/Skype/WhatsApp/Google Meet/Jetsons-style View Screen/Microsoft Teams/FaceTime arena of play. I was convinced to not only give the game a try, but that it was also relatively easy to play remotely. One or two games later and I was hooked. Not just on the game, but also on how easy it was to play with friends who were either stuck in isolation or later, as those restrictions were eased, just people who are in my gaming group but don’t live anywhere near my zip code.

When Board Game Quest’s periodically benevolent publisher Tony Mastrangeli told me that I had the chance to review the new digital version of Unmatched, I jumped at the assignment. One of my favorite physical board games that I play with people across the country via a screen now entirely existing on a screen? How could I say no?

For those in the audience who haven’t played Unmatched in any form, this review won’t go into great detail about how to play the game. (I’ll send you off to read the aforementioned Tony Mastrangeli’s initial review of the analog version.) In its simplest form, Unmatched is a tactical dueling card game system. Players (usually two, but technically there are variants for three and four players) will use their cards to move, attack, and defend with their characters until only one Hero is left standing.

The digital version of Unmatched is no different and the app does a good job of distilling all the information players have in the tabletop version—a hand of cards, minis, map, etc.—in a fairly readable setup.

In terms of the rules of the game, the app also utilizes a lot of onscreen prompts to help players understand why it’s doing certain things at certain times. This is likely very useful for people who aren’t too familiar with the rules of the game, although as an Unmatched veteran, I will admit some of the information felt unnecessary and a method to turn off a lot of the more minor callouts is probably something that should be developed.

At the time of this review, the digital version only contains the four “base” characters that were released in the original Unmatched: Battle of Legends, Volume 1 box. Other characters will be released very soon (at approximately the same time as the app goes live on other devices), although there has been no official word on what the release order will ultimately be. (And as an editorial note: I wouldn’t hold my breath on any of the game’s licensed characters making it over to the digital realm.)

As someone who’s played a ton of Unmatched (it’s my second or third most-played game over the last 18 months), I’ll say right from the start that the digital version is instantly intuitive. I can’t speak to the experience for someone who doesn’t know the rules of the game (even though Unmatched isn’t a terribly complicated game to begin with), but for someone familiar with the rules it’s incredibly easy to jump in and play.

The layout and graphics are also stellar and identically replicate what the tabletop version looks like in person. However, this is both a positive and negative aspect of the digital implementation. It looks great, but it also feels like a missed opportunity to have the characters appear colorized (painted digital miniatures, if you will). It’s not necessary, of course, but it would have been a nice touch to spruce up the digital version’s offering.

As I said in my overview of the rules, the app also pops up with a lot of prompts throughout play in the vein of “Medusa Wins the Combat” and then will highlight areas of the cards that are currently triggering. This all works pretty well (aside from some early launch glitches, which are to be expected), but sometimes they almost seem to take too long. Even in games with other players, looking at each portion of the screen every time combat is resolved got a little tedious.

One aspect of the game I was particularly interested in was how the AI fared since Unmatched doesn’t have an official solo option. And… it’s pretty good. The developers are obviously always tweaking things, but for the most part I found the different difficulties to be of appropriately scaled challenge levels. The hardest level wasn’t overly hard, mind you, and sometimes the AI would make confusing tactical decisions. This is to be expected in a game where the options on every turn are pretty expansive, but it is still something that needs to be tightened as the game hits other platforms. (As an aside: Unmatched will apparently offer cross-platform play once it launches on things like Android and iOS. If successful, this will be very cool.)

Another negative thing that I, unfortunately, wasn’t able to test was how the game will look on the various platforms once it’s officially released. On my largeish tablet, it looks great and ran very smoothly (aside from the occasional glitch of my software or growing pains in the app itself). How will this play on the smaller screen of a Nintendo Switch or smartphone? That remains to be seen.

Unmatched is a fantastic game. There’s little dispute about that. And this digital version is a really successful implementation of the system. The only true gripes at the time of this review are some of the AI’s decision-making, the lack of ranked matchmaking for online play (which is something the developers eventually want to implement), and the small collection of characters that will be available at launch. More characters will appear pretty quickly (for purchase, mind you, which is maybe another negative for those of us who have already spent hundreds of dollars on the game), but it’s unlikely that any of the licensed sets will ever make it onto the digital format. (So that means you’ll still have to go buy Bruce Lee and Deadpool for $600 each on eBay. Sorry. I don’t make the rules.)
Still, these gripes aside, the digital game itself is a blast to play and easily scratches that Unmatched itch in a streamlined way. I’m anxious to give this one a try once it has cross-platform play.

Final score: 4 Stars. A nifty implementation of one of the best dueling card games currently on the market.

Hits:
• Eventual cross-platform play will be great
• Easy to navigate game decisions
• Visually matches original game
• AI, while not perfect, is a welcome addition to the Unmatched catalog of games

Misses:
• Not a great “how to” section for new players
• Missed opportunity to not have the digital miniatures come in full color
• Explanation panes for each activity in the game can get repetitive (at least to those who know the game well)
• Having to rebuy every character digitally will get pricey