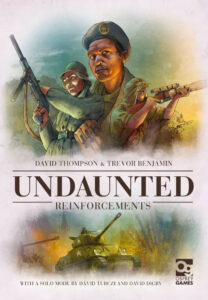 It’s hard to believe that it was only 2019 when Undaunted: Normandy surprised us all with an excellent 2 player, deck-building war game. Its mechanics were both unique and deeply engaging, so it’s no surprise that it was quickly followed up with the award-winning Undaunted: North Africa. That stand alone expansion not only took the war from Europe to another country, but even gave us vehicles to play with.

Well, designers Trevor Benjamin and David Thompson we’re not finished because today we are looking at the first traditional expansion for the game, Undaunted: Reinforcements.

Armour and Armament gives rules for using vehicles in Normandy and also includes two new specialists: US Grenadiers and German Submachine Gunners. It also adds four new scenarios that make use of these new units. Similarly, Under Cover of Night introduces landmines to the gameplay of North Africa, as well as four new scenarios.

Reinforcements also introduces some minor Friendly Fire rules for when you take a casualty on your own turn. Joint Operations gives rules for playing the game with 4 players instead of two. And finally, Enemy Unknown brings the much-requested solo play to the game.

The biggest change of this expansion must be the solo mode. Armour and Armament, Under the Cover of Night, and Friendly Fire all kind of add in things you’ve already seen. Sure, there are new units and scenarios, but it’s nothing that feels wholly different from the core games. It’s more content that you’ve already come to know and love. I mean, I’ll take it, but it’s not the star of the show.

Likewise, Joint Operations is… fine. While yes, it does allow you to play the game with four players instead of two, all it really does is split your role into two halves. Much like Star Wars: The Queen’s Gambit or War of the Ring does, it takes a two-player game and shoehorns in more players by dividing up things that one player was already doing. I’ve never been a fan of this style of player scaling. But it’s there if you really want it.

However, I think that solo mode is probably what’s going to make or break this expansion for would-be buyers. It uses a card-based system with a series of flow charts to make decisions for the enemy. Initiative for the AI simply draws a random card off their deck, but to make up for the random draw, it gets to keep the card if it wins initiative. This will force the human player to not always just dump a low card for initiative because you are then giving the AI an extra activation.

The AI deck is actually really thick because cards are tailored to the scenario. So, what the rifleman does in scenario 1, might be different than their flowchart in scenario 2. It’s a little fiddly at the start, but once you get a feel for the game terms, and have had a few rounds with a unit, it does start to all make sense. I keep going back and forth if this would have just been more streamlined with a digital app that will step you through things, but the cards do work fine, if not a bit cumbersome to set up and tear down. Regardless, solo mode works well, and the AI can hold its own.

Finally, I should point out two things about the components. One is that Undaunted: Reinforcements comes in a big box that holds all its own content, plus all the content from Normandy and North Africa. So, you can safely toss those old boxes in the bin and keep everything in the Reinforcements box. So that’s great news. On the other side of the coin, there were some printing issues with this expansion, and the new card backs for the cards used with Normandy and North Africa don’t quite match the ones from the original games. The color is off just enough to be noticeable. If that really bothers you, Osprey Games has fired up a replacement program.

I keep jumping back and forth on whether to give this expansion a “buy” or “optional” recommendation. On one hand, solo mode is pretty great but if you don’t have any interest in playing solo, then you really just get a dozen or so more scenarios and a box to hold it all. Whether that’s worth the price of the expansion in itself is up for debate. The mines for North Africa were fun, and I like being able to use vehicles in a few scenarios for Normandy. But to be honest, if you don’t have much interest in solo play, there is probably enough content in the original games for all but the most die-hard of fans. That being said, most everything in Undaunted: Reinforcements is pretty good and I always appreciate more concise storage options. So, I’m going with a buy.

Hits:
• Solo mode!
• More content for North Africa and Normandy
• One box to store them all