We review Tokyo Coin Laundry, a game set in a laundromat that offers a wide variety of ways to play. This next game in the "Toyko Series" from Jordan Draper Games will let players use some excellent looking components to play many different games. 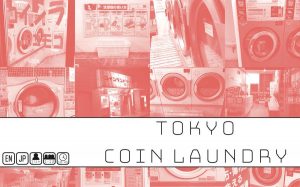 Last year we reviewed Tokyo Jidohanbaiki, a game with a bunch of ways to play, all using components of vending machines and various colored and shaped bottles. This year, the second round of Tokyo Series games gives us Tokyo Coin Laundry—a similar components-first system, but this time imitating a laundromat.

So, can washing laundry, which is my least favorite household chore, be turned into something fun? Let’s take a look.

Just like Jibohanbaiki, Coin Laundry is really mostly about the components. You’ll get six plastic laundry machines (4 washers, 2 dryers), 2 sets of laundry, some detergent bottles, and a few cardboard tokens and a deck of cards that reflect most of the other game’s components.

So… it’s all pretty cute.

Now what are you doing to do with them? Well, the rulebook offers a handful of games. While I didn’t play them all, they include:

The Tokyo series games from Jordan Draper have always, in my mind, been as much an art piece as a game. Heavy economic euros in tiny boxes. Crazy dexterity games with laser-cut wooden pieces. Games that are designed starting with weird components and making something out of them.

Unfortunately, for me, Coin Laundry falls off the game side and mostly into the art piece category. I love the components. I like the idea of making a game about efficiently getting your laundry done. But most of the included games in the rulebook just don’t give enough to make exploring the components enjoyable.

The Mr. Sudsy’s RPG takes up about half of the entire rulebook. Laying out ways to determine your mood for the day and using that as a hook for how you interact with the other players doing their laundry. Will you share machines with them? Let them borrow detergent? It’s up to you… I just didn’t find this experience much more fun than actually doing laundry.

The rest of the games are similarly ho-hum. Wash Machine was an interesting take on a tactical wargame. Careful positioning of your washers and dryers was the key to success. And, of course, well-flicked bottles of laundry detergent. Coin-Op on the other hand was miserable, a game with too little going on, and ended in about 5 minutes and felt like nothing really happened.

I can appreciate the experience that Jordan Draper Games is going for with the Tokyo Series. While none of the games for last year’s Jidohanbaiki were award winning, they were serviceable and the components were lots of fun to play with. Tokyo Coin Laundry games just fall a little bit flat. And it was disappointing that most of the rules were for an RPG and just didn’t do anything for me.

I will say that I can’t wait to see what the rest of the Tokyo Series (and hopefully future installments) has to offer. We’ve got plenty of boring Euros to play to convert resources into victory points. Sometimes going way outside the box means you are going to fall flat. But I applaud the effort even if the result wasn’t ideal.

Final Score: 2.5 Stars – Great components. Some mediocre games and some worse than that.

Misses:
• The best games included are still just OK.
• The RPG is lighthearted but dull and takes up most the rules.