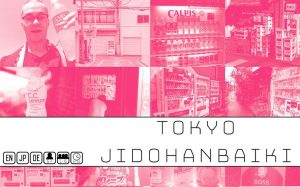 Today we are taking a look at our third game in the Jordan Draper Tokyo Series, Tokyo Jidohanbaiki (having previously reviewed Tokyo Jutaku and Toyko Metro). Tokyo Jidohanbaiki is a set of games based around Japanese vending machines. There are miniature bottles, a plastic cube-tower-like vending machine, and a rulebook explaining many ways to put these distinctive pieces together in order to create some kind of game.

Tokyo Jidohanbaiki games play 1-6 players and most games play in 30 minutes or less. Let’s take a look at what kind of experience this unique box offers.

Tokyo Jidohanbaiki isn’t so much of a game as a set of components to build games around. The games are based around Japanese vending machines and drinks. There are six different shaped bottles in six different colors. In addition, there are 6 crates that hold 6 drinks each. The star of the show, at least for the fun factor, is the vending machine itself. There are rules for 18 different games in the box and additional games posted online.

The games themselves take span a few different player counts and game mechanisms. There are a couple of solo games that are more or less puzzles on sorting the drinks in a limited number of moves. For multiplayer options, most take the form of some kind of area control game using the crates or economic game buying and selling various drinks.

You can also combine Jidohanbaiki with the other games from the Tokyo series—Jutaku and Metro—to have expanded games. The Chocolate Milk game in the Jidohanbaiki rulebook uses the architect markers from Jutaku to add basically player pawns to the existing components.

Tokyo Jidohanbaiki is a difficult game to really nail the experience as it really is a whole host of different games in one. But they all share some similar qualities. In addition to making use of the same cool components, they all play in a very short amount of time. The longest of the games in the Jidohanbaiki rulebook might take 30-45 minutes, but most are about 10-20 minute affairs.

The solo games, Pura and Pura Pura, are fantastic quick puzzles that you can set up and play very quickly. They have definitive win conditions but you can track how well you did by the number of Yen you have left at the end of the game, allowing you to continue to beat your previous best scores.

For the multiplayer games, there are some highs and lows. Chocolate Milk is an economic game where you buy and sell drinks. As you buy drinks, that color and shape becomes more valuable. It has an optional rule where you drop purchased drinks into the vending machine and only successfully purchase it if it doesn’t get stuck. When drinks are sold, the price resets. It’s a simple to teach and play game and has a neat push your luck element.

On the other hand, 5 Can Stub, is basically a drink-based poker variant where you collect drinks hoping to make the best “poker” hand using the drinks that are available for purchase. It fell a bit flat as players were eliminated and the game just didn’t do much for my particular group.

I wanted to make sure to give some insight into the included games, but to review the individual games of Jidohanbaiki misses the point. The fun in Jidohanbaiki has been the discovery of a new game in less than 30 minutes over and over again.

The games come from multiple designers and the ones we’ve tried thus far all have a unique feel. Seeing what types of games can be developed given a framework and components has really been a fun experience. Not every game has been a winner and many don’t have the depth to revisit all that often, but even if you just work through each game in the printed rulebook once, you’ll have 18 different game experiences. Rules for additional games using Jidohanbaiki are already being released online as well.

I do have some small complaints. The components are very small and I have some trouble telling apart some of the bottle shapes. The bottles referred to as “tallest” and “not tallest” are very similar and one of them is only slightly shorter than the other, making it difficult to tell apart from a distance. For some of the games, this matters more than others, but it is a concern. Also, while the vending machine component is really neat, it’s rare that much gets stuck in the machine and it feels like many games that try to incorporate it might be better off not using it.

If you look at the components of Tokyo Jidohanbaiki and think, “I bet that game would be fun,” stop what you are doing and just go order it. The draw here is definitely the idea of what can be done using these amazing components. You’ll find plenty of games you like. You’ll almost definitely try a few games you don’t enjoy. But regardless of the number of people are your game day, there is a game in this box you can read the rules for, teach everyone, and play through in less time than it takes to set up most mid-weight euros.

This is clearly the case of the whole being more than the sum of its parts. None of the games I’ve played so far are so outstanding I can see myself playing them dozens of times, but I’ve had plenty of fun with Toyko Jidohanbaiki and still have plenty of brand new games to play.

Final Score: 3.5 Stars – Unique set of games was beautiful components. A lot to explore in this small box.

Hits:
• Twenty games to explore between the rulebook and online.
• All feel significantly different.
• Most can be taught and played in less than 30 minutes.

Misses:
• Not every game is a winner and nothing is outstanding.
• Small concerns with some components.