We review Time Barons, a time travel card game published by WizKids Games. In Time Barons, players are rival time lords trying to eliminate their opponents from the time stream. 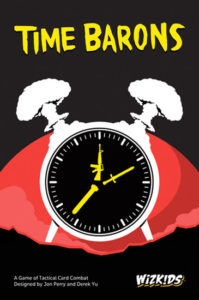 Time Travel is a theme in tabletop gaming that never seems to get the love it deserves. I’ll try almost any time travel game because I love the theme. Unfortunately, most either are of dubious quality or have a pasted on theme. Right now, Time Stories is probably my favorite of the bunch, but even that title is not without its flaws.

And now we have Time Barons, the newest time travel themed game to grace my tabletop. However players aren’t friendly time travelers in Time Barons, but ruthless warlords seeking to be the only baron left in the time stream. Sounds neat, but how does it play? It’s time to find out.

While Time Barons can play with 2-4 players, we’ll be looking the main, 2 player ruleset. During the game, each player draws from four shared technology decks and starts with a Homeland card in play.

On a player’s turn, they can take 3 actions that can be spent on any of the following:

Draw a card: From a tech level that you’ve achieved or lower
Upgrade: Spend actions to upgrade your tech level
Gain a follower: Placed on cards to power them
Relocate: Rearrange your followers as you see fit
Play a card: Every card has an action cost and you must spend that many actions to play the card. Cards will either be:

Abilities on site cards require a specific number of followers to activate, and some also require actions as well. The main goal will be to gain followers for yourself and destroy your opponent’s followers. Attacks on your opponent’s site damage the card and followers as well. When a site takes enough damage, it’s discarded along with any followers remaining.

The game ends when you’ve eliminated all of your opponent’s followers, or 3 of the tech piles have run out. In that case, the player with the most followers wins.

Time Barons is actually an older game that used to be self-published through The Game Crafter website. WizKids Games has since picked it up and is offering this new, updated edition. The game actually comes with a nice amount of content in the box, including an expansion and rules for 3-4 players (something that was absent in the original edition). This helps give the game a lot of replay value, because not only do you have 2 different decks you can play with, but different play modes depending on the player count.

But I’m getting ahead of myself. Let’s talk about the game play. Time Barons very much feels like a light dueling game, ala Magic: The Gathering (except with a shared deck). Your goal is to reduce your opponent’s followers to none, which is accomplished through the site cards you play. To accomplish this, you’ll be doing a bit of engine building in Time Barons. Ideally, you’ll want to play cards that combo off each other. This card lets you do X, allowing that card to let you do Y. Setting up combos like that in Time Barons can be really satisfying.

The interesting thing about Time Barons is that the followers are not only your life points, but they also power your site cards. So if you know your opponent relies heavily on one card to power their combo, you can attack that card and take it out. That not only will kill any followers on that card, but also remove it from their engine. This can help give the game a decent ebb and flow.

However, on the other side of the coin, the luck of the draw can sometimes favor one player and there isn’t a ton you can do about that. Yet the bigger issue with Time Barons is that if one player gets ahead, then the writing can sometimes be on the wall. If a player gets some powerful cards out and sets them up correctly, you could be on the defensive for the rest of the game, while your opponent slowly creeps towards more power and the inevitable. Thankfully, Time Barons is a relatively quick game (about 30 mins), so even in those cases, you don’t have to suffer for long.

Finally, when it comes to the time travel theme, it’s mostly pasted on in Time Barons. While the tech cards from the 4th stack are definitely more powerful (Doomsday Laser anyone?), they could have easily been renamed to something else and the game would not miss a beat. Those looking for a great time travel experience aren’t going to find it here.

Time Barons is a solid, light war-themed card game with a nice amount of replay value. I liked how easy it was to get to the table and the potential for building up a nice engine in the game. While it’s not really a “take that” type of game, it can feel more like one when you get into the higher player counts. However I prefer it as a 2 player dueling game to the multiplayer options (yet it’s nice to have the rules there should you want it). Despite some minor criticisms, Time Barons is still pretty enjoyable and should appeal to anyone who’s looking for a direct conflict game that’s easy to get to the table.

Final Score: 3.5 Stars – A fun and light dueling game that, while it doesn’t really use its theme, but still provides for an enjoyable experience.

Hits:
• Accessible dueling game
• Good amount of replay value
• Clever use of followers as life and power for cards

Misses:
• Theme is pasted on
• Luck of the draw can be a factor