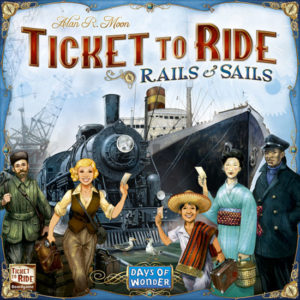 Like many board game enthusiasts, I often used Ticket to Ride (TtR) to open the eyes of non-gamers to a world where you can play a board game and not rely on dice to tell you where to go (a.k.a. roll and move, a.k.a boring, a.k.a. Monopoly).

To be honest, because my collection of games has exploded in recent years, I would only break out TtR when gaming with friends or relatives who did not play many board games. I like TtR, but I have moved on to games I find more enjoyable.

When I heard about Ticket to Ride: Rails & Sails (TtR: R&S) at Gen Con 2016, I was intrigued. It was billed as a more strategic version of TtR. I looked forward to trying the game and was lucky enough to be given the opportunity to review it. More importantly, is TtR: R&S a heavier game than TtR, or is it simply TtR with boats?

TtR: R&S is a card drafting and set collection game in which you build train and boat routes by matching the color of the cards you have drafted to the color of the routes on the board. It supports two to four players and clocks in at about 30 minutes per player. Ticket to Ride players, that is NOT a typo….

The components for Ticket to Ride: Rails & Sails were good.

Below is a high level summary of the game; however, feel free download a PDF of the official rules here.

On a player’s turn, they can do one of four actions:

Note: New to Ticket to Ride: Rails & Sails are Tour Tickets, special tickets that show multiple cities that score extra points if they are connected exactly as depicted on the card.

Players start the game with three harbors. Any unconstructed harbors will cost the player four points.

The game end condition triggers when one player has six or fewer boat and/or train pieces left in their supply. When this happens, every player, including that player, has TWO more turns until the game ends.

The winner is the player with the most points after end of game scoring (completed and uncompleted tickets, as well as harbors and unbuilt harbors).

Note: TtR: R & S does not have a longest route or a most completed tickets bonus.

I was really looking forward to playing Ticket to Ride: Rails & Sails; unfortunately, I did not enjoy this game as much as I thought I would.

I would NOT recommend using TtR: R&S as an introduction to our hobby. For newer gamers, I would recommend the original Ticket to Ride or Ticket to Ride: Europe (review here) instead.

If you need a specific card and no wild cards are face up (these are only in the train deck), you will be forced to either draft a card you do not need to replace it with the type you are looking for or you will have to draw blind. While drawing blind happens in Ticket to Ride, it does not occur nearly as often as it does in TtR: R&S because, in TtR, there were five face up cards that were ALL trains. Needless to say, the drawing of cards in TtR: R&S is even more random and luck driven than any other Ticket to Ride game.

If you did not enjoy the luck factor of drawing and completing tickets in Ticket to Ride, the luck factor is even stronger in this game. The player who draws tickets that are near each other definitely has an advantage in TtR. This can be compounded by players who draw tickets as an action and are lucky enough to get one or two that they have already completed, as opposed to drawing cards that do not align with your current route structure. That’s a nice way of saying you just got hosed (remember that uncompleted routes are negative points during end of game scoring).

The other significant downside to the game is the game length. It took four experienced Ticket to Ride players slightly over two hours to finish our games even after multiple plays. This is due to the increased number of pieces used in the game (60 vs. 45), managing two types of cards and the amount of blind drawing that we experienced.

While the blind drawing has already been detailed and the increase in the number of pieces is self-explanatory, what surprised me most about the increase in game length was the impact of managing your hand. It may not sound like much, but trying to organize your hand led to some players having two piles in front of them, one for boats and one for trains. Flipping between these and trying to maximize your route building just slowed the game down.

Some may consider it insignificant, but the increased time length really impacted our enjoyment of the game. In fact, in one of our games, as we approached the two-hour mark, one of the players began claiming the longest routes so that the end game would trigger; unfortunately, even the end game was lengthened for each player from one round to two rounds.

I know I am focusing on the negative, but I wanted to detail why I did not like the game as much as I hoped I would. That being said, if you like Ticket to Ride, and would not mind a longer game with more luck, you may enjoy Ticket to Ride: Rails & Sails. It has the same gameplay decisions that make TtR enjoyable: trying to decide when to claim a route vs. drafting cards, trying to complete tickets while trying to guess and potentially foil where your opponents are trying to complete their tickets. In addition, it will not be difficult for TtR veterans to understand and play this version.

In case it is not obvious, of the two maps, I definitely preferred playing on the Great Lakes map!

World map: 2.5 Stars – A new formula for Ticket to Ride that falls flat due to the increased game length and increased luck factor.

Great Lakes map: 3.0 Stars – While the luck factor is only barely mitigated (harbors are worth fewer points), the shorter play time and lack of wrap around routes made this map the better game experience.

Hits:
• Double sided board provides two maps that play slightly differently and adds replay value to the game
• The new Tour Tickets are a good twist on the usual Tickets used in TtR games
• The component quality is good
• The CONCEPT of using both rail and boat routes is a great idea…

Misses:
• The execution of the boat routes and the design of the decks did not work for me
• The game length is too long for what it is (it lasts about twice as long as a standard TtR game)
• The luck factor has increased through the inclusion of harbors and the second deck of cards (boats) to draw from