This review is for an expansion for Ticket to Ride. If you haven’t already, you can read the review for the Ticket to Ride Europe here. 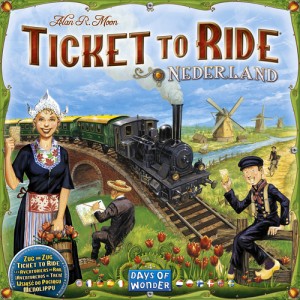 If you ever wander onto the Ticket to Ride page on the Days of Wonder website, you will see an option to look at fan contributions. You can find over 30 links to maps made by the loyal fans of the game that allow you to play Ticket to Ride in different countries around the world. In 2011, Days of Wonder started to put together map collections that are used with the trains and train cards from either Ticket to Ride USA or Europe. These collections add new mechanics to each map, making them play somewhat differently than the base game. The first three map collections added a dangerous Himalayan route, bonus to destination tickets, and terrain cards that can make routes even more valuable. Today we will be looking at Days of Wonders’ most recent map collection, Vol. 4 Nederland. On this map, players will be claiming routes in the Nederland countryside. Lets get into the review to learn about the new mechanic this brings to Ticket to Ride.

On this map, being a procrastinator will hurt you. Most routes are double routes that are in play regardless of the number of players. All routes have a cost that players will have to pay from their collection of Bridge Toll Tokens they get at the start of the game. When the first route of a double route is claimed, the player must pay the toll for that route to the bank. When another player claims the other route, they pay the player that claimed the first route instead of the bank. These tokens are important for end scoring because the player with the most of these tokens at the end of the game will earn up to 55 points to their final score. If a player isn’t able to pay the toll for a route they will take a -5 card and not earn any of the bonus points. The game has plenty of high value destination tickets and scores will have to be over 125 to be competitive.

I have had the chance to play three different editions of Ticket to Ride before I tried this map. I liked how each one felt different from each other. The USA map is the default standard, while both Europe and Märklin add new mechanics to the game that make it slightly more strategic. The Nederland follows along the lines of Europe and Märklin. One of the things I love about the core mechanics of Ticket to Ride is that there is no hand limit.  You can hold cards back until you are ready to strike and claim a bunch of routes in a row. In this edition, players don’t want to do that at all. This expansion forces you to get your trains out as quickly as possible. Players who hold on to their cards will end up having to take the -5 point cards towards the end of the game.

If you have played Ticket to Ride and thought the game play was a little to friendly, then sit down and play a four or five person game on this map. This map is by far the most vicious I have ever played in Ticket to Ride. The majority of routes are under 4 trains long and it won’t take players long to start claiming them around the major hubs, which get crowded very quickly. I played a game where one player kept getting forced to change their path because routes kept being claimed by the other players. He eventually ran out of time and managed to just get 45 points for the game because his destination tickets netted him -40 points. Playing with 4 or 5 players will have everyone clamoring for a very limited amount of real estate. Be sure to warn your players of this element of the game.

This map also has the potential for very high score totals. The lowest winning total for any of our games was 174. The toll bonuses matter a great amount in final scoring and they can easily tip the scale to one player’s favor. To balance this aspect, there are very high value destination tickets in this game for players to attempt to claim. This works well as I have managed to win games without any bonus points awarded because I was able to have enough tickets completed. One slight rule change is that you can draw four cards instead of three when trying to get new destination tickets. This allows for a greater chance to get a ticket that is close to something you have already built and score it easily.

Just because Nederland is an expansion, that doesn’t mean that Days of Wonder skimped on the components for this game. The destination tickets and tolls tokens are solid and the board looks great with nice graphical touches that match the previous boards I have seen. One gripe I have about the game board is the font they used. When you are sitting on the sides of the game or if it’s upside down for you, the board becomes difficult to read the city names. Plus, I’m not as familiar with the cities in the Netherlands and being unable to read the script on the board was annoying.

The game does allow for a two player variant where players use one of the unused train car colors to claim routes throughout the game. Each turn, players will draw a destination ticket and if there isn’t a route on the bottom of the card nothing happens. If there is, the neutral color trains will take a route in between those cities if there is one available. This allows for the players to get more toll money than just their human opponent. I’ve found that this variant works OK. The AI player was able to claim routes much faster than we could and ended up not paying us many tolls. We enjoyed our time playing the two player variant, but I would rather play with at least 3 players.

Overall, I had a very enjoyable experience playing Ticket to Ride: Nederland. The toll cost is an interesting mechanic that forces you to play your cards as quickly as they get into your hand. When I look for expansions to add to my collection I want them to do something different than the base game and Ticket to Ride: Nederland does that. If you don’t like confrontation and prefer a more family friendly experience, I wouldn’t recommend you get this map. You will get annoyed with the confrontation and you probably won’t want to play it again. However, if you are looking for a more cutthroat map to play with your gaming group, I would heartily recommend Ticket to Ride: Nederland.

Expansion Score: Optional – I wouldn’t recommend this map to a casual player, but a seasoned Ticket to Ride veteran will like the new mechanic and enjoy the cutthroat nature of the map.

Misses:
• Meanest version I have played, one of your friends will leave mad.
• Font on the board is hard to read