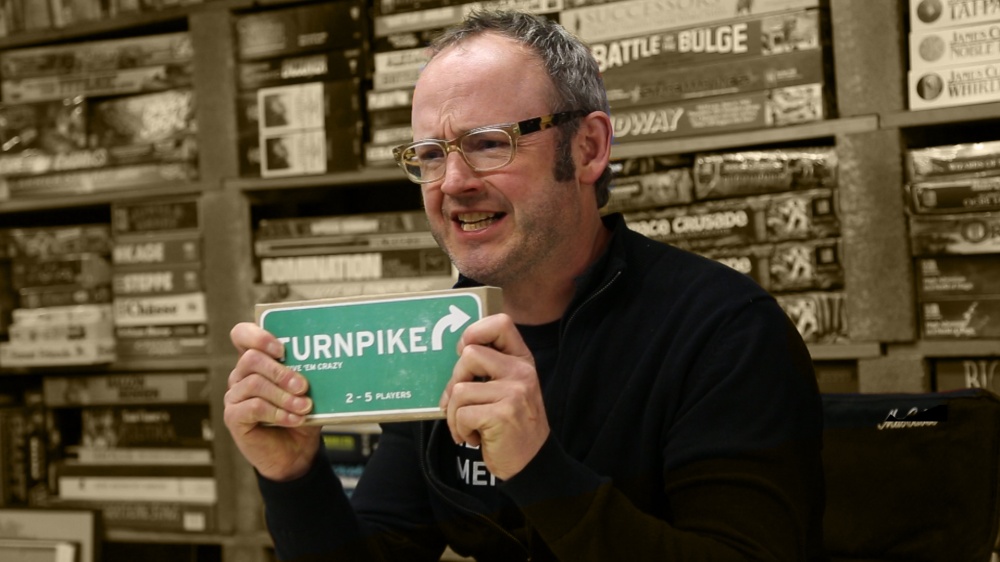 Last year we brought to your attention a Kickstarter campaign called Adventures in Tabletop. This project was looking for funding to developer a documentary about the world of board gaming. A great idea if I ever heard one.

The project successfully funding (over-funded even) and the movie has finally made its way to our screens. Project creator and experienced filmmaker Douglas Morse has since renamed the movie to fit with the focus of the piece. The Next Great American Game follows along with Randall Hoyt, a professor of Graphic Design who decides he wants to make a board game. The Next Great America Game travels with Douglas as he heads to Gen Con, Origins and The Chicago Toy and Game Fair (CHITAG) as he attempts to pitch his game to publishers.

Recently, on a cold saturday afternoon, we sat down at BGQ Headquarters and gave the documentary a viewing. Does Randall have The Next Great American Game? Is this a movie game designers will enjoy? Should I have opted for extra butter on my popcorn when I watched the movie? Lets dive into the film and answers some of these questions!

As mentioned earlier, Randall Hoyt has developed a board game and he thinks he’s got the next hit on his hands. His game is called “Turnpike” and it’s about driving while stuck in traffic (no, seriously). He got the inspiration after spending countless hours driving to visit his daughters on weekends and holidays. Turnpike has been in development by Randall for over 5 years, so unfortunately, we don’t get to see his design process from the start. We jump into his journey as he’s preparing to meet with publishers at Gen Con, the biggest game convention in North America.

Early on in the movie, I’ll freely admit I don’t much care for Randall as a protagonist. It’s hard for me to be sympathetic towards him when he really seems so clueless. It seems like he’s not really much of a gamer and just came up with the idea and decided to roll with it (pun intended). He does display a sort of wide-eyed optimism about his game, which while endearing, also paints him as a big fish out of water. This is really obvious once he starts interacting with publishers. It’s clear that to us that he’s in a bit over his head, but unfortunately not to him.

For his game in general, it’s hard to give a good description of what it is, because we really never get a full break down. Best I can deduce is that it appears to be a “roll and move” game with a good dose of “take that”. Turnpike still hasn’t made its way in to Board Game Geek’s database, so who knows what the full rules are really like.

I’m fairly certain that Randall admitted in the movie that he’s not an avid gamer and hasn’t played many tabletop games outside the mainstream (note to aspiring game designers: PLAY EVERYTHING). Anyway, early on in the movie it’s sort of like watching a train wreck happen in slow motion. I cringe as he talks with publishers and clearly ignores their critiques. There is one particular awkward scene where Randall’s friend encourages him to interrupt someone’s game demo at IELLO to showcase his game. Thankfully he didn’t as I can only imagine how bad that breach of etiquette would have gone over.

At the risk of spoilers, Randall doesn’t find too much in the way of takers for his game at Gen Con. He does get a particular brutal dose of reality from James Mathe of Minion Games (who clearly doesn’t have any love lost for Game Salute…) that he appears to take in stride. We only see bits and pieces of their conversation so I don’t know if we being overly harsh or not.

Randall eventually makes his way around to Origins and CHITAG with his game. It seems like he has better luck at CHITAG and finds a few publishers willing to take his prototype for further review. He spends a decent amount of time talking with Dan Yarrington of Game Salute and Smirk & Dagger Games, who takes a copy of Turnpike for further testing.

I think the pivotal point in the movie starts when Randall meets Mike Gray, a retired buyer for Hasbro Games. Mike gives Randall some excellent advice that he finally takes to heart and is really the turning point for his game.

Turnpike undergoes a re-theme and he has a bit more luck with publishers. Unfortunately, the movie ends without us getting any final resolution on his game. I’m guessing it still hasn’t been published as I’ve not seen it anywhere for sale.

I think The Next Great American Game is a great movie that any budding game designer needs to watch. There are a lot of good lessons that can be gleamed from Randall’s journey. Somethings he did that you can take away:

1. Playtest: It kind of feels like Randall’s game was played by his family and friends only. Playtest the heck out of your game and with strangers in your target demographic (yes you have one).
2. Listen: Early on, Randall ignores a lot of what people are telling him. You need to listen to your critics, even if it hurts.
3. Schedule: Randall seemed to be just walking up to booths trying to get publishers to try his game. Early on that met with varying degrees of success. IELLO told him to make an appointment, Steve Jackson Games basically told him no. But conventions are busy for publishers, especially during the vendor hall hours. Plan ahead.

Overall the story was most intriguing when he was interacting with people in the hobby industry. I found a lot of their comments insightful, although I think some of them could have been on good behavior because they were being filmed. Would he have gotten that kind of access without a camera crew? Who knows.

To be honest, I was more hoping this would be a movie about either the tabletop gaming world at large, or more focused on game design. Unfortunately, we meet Randall as he’s in the pitching stage, so we don’t get to see any of his design process.

Speaking of Randall, my mind tended to wander the most when it was just him on camera. Whether it was him telling a story or talking about his Bi-Polar disorder, I found out I didn’t really care (does that make me a bad person?). I wanted him to get back to the conventions, publishers, and his game. I’m guessing this was in here to really draw us in to Randall and show more about him, but really, I didn’t end up liking Randall any more after hearing about his life.

Overall it was a good watch, but if you are thinking of checking it out, I’d highly recommend opting for the bonus features. There are interviews with Antoine Bauza, Steve Jackson, Reiner Knizia, Richard Garfield and others that are pretty fascinating. I actually ended up liking the Bauza interview more than the movie! But that could also be because I’m a huge fan of his games.

The Next Great America Game is available as a digital download at www.tabletopmovie.com

All in all a worthwhile watch if you have even a passing interest in tabletop gaming.

Here is the trailer for your viewing enjoyment: