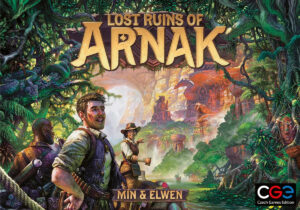 One of my favorite movie trilogies must be the Indiana Jones series. What? No, you’re wrong, there are only THREE movies. It’s a fantastic combination of exploration, adventure, and excitement. What’s not to love about Dr. Jones and Co. exploring uncharted ruins or lost civilizations.

If you’ve been looking for a new way to embrace your inner archeologist, now you’ve got the chance. The Lost Ruins of Arnak, a new euro game from publisher Czech Games Edition that will have you exploring the lost ruins of an ancient civilization. So, grab your bullwhip and fedora as we get ready to embark on a new game review!

The Lost Ruins of Arnak is played over 5 rounds, with each player taking several turns until they pass. I’m just going to give you a high-level overview of the gameplay here, if you want the full details, you can download a PDF of the rules here.

On a player’s, they can take one main action and any number of free actions.

Once you have finished your action, the next player goes. Turns will go by in this manner until all players have passed. There is a cleanup phase and then the next round begins. The game ends after 5 rounds and players total up their points (from 6 different sources) and the player with the most points wins.

While it may seem like there is a lot going in The Lost Ruins of Arnak, and there is, it’s not a hard game to learn. There are 6 different actions you can take on your turn and they all make sense, especially if you’ve been playing modern games for a while. Place workers, play cards, spend resources. Actually, taking your actions is nowhere near as hard as deciding what action to take.

The Lost Ruins of Arnak is one of those games where there is going to be so much you want to do but never enough actions to do it. This is also one of those games where the early rounds will be quick, with rounds 4 and 5 being much longer as players have thicker decks to work with and more special abilities. But in either case, you are always going to be juggling your resources to do all the actions you want. Cards are used to gather resources, perform special actions, and also for travel symbols. So, every play of a card must be carefully considered as action optimization here is key. And with only two workers, you need to decide how best to use those: do you dig for resources or explore new sites?

When crafting your strategy, there are many avenues you can take. In one game, I shot up the research track as far as I could go. In another, I just tried to buy tons and tons of cards. In yet third game I just tried to explore lots of dig sites and defeat monsters. All were viable, winning strategies. This truly is a game with multiple paths to victory. Yet you are also not going to want to completely ignore any of those paths. The research track just has to many bonuses to skip altogether. And you’ll want more cards, as every card purchased is better than your starting ones. And exploring dig sites? That not only gets you victory points but also flexibly as artifacts can be cashed in for one-time bonuses.

All in all, The Lost Ruins of Arnak is a well thought out game that I truly don’t have much to complain about. If I had a criticism for it, it would probably be that it doesn’t really break any new ground. Deckbuilding, worker placement, resource management? You’ve seen it all in a game before. Yet what it does do is blend them all seamlessly into a really engaging final product. Not once were we bored or felt like we’ve been there, done that. Even after half a dozen plays, I don’t feel like I’ve seen all the game has to offer. That’s sure helped in the fact that all the game’s gear and artifact cards are unique, and that the game board is two-sided, with the second side changing up the research track and dig sites.

Finally, the production values in The Lost Ruins of Arnak were fantastic. The artwork (a team of artists was used) is thematic and on point. The resources vary from cardboard tokens for the common ones to unique plastic ones for the more high-value resources. And the artwork on the game board just draws you in.

I wasn’t expecting to enjoy The Lost Ruins of Arnak as much as I did. The gameplay draws you in from the beginning and never lets go. Sure, it’s not striking out into very much new territory, but that’s ok. The familiar mechanics mesh together nicely and make learning the game really simple. While I didn’t try it, there is also a solo option for the game, but I think 2-3 players is my favorite way to go.

Overall I loved The Lost Ruins of Arnak and had a hard time finding things I didn’t enjoy about it. For those curious, the player interaction is fairly low and there is a bit of randomness to deal with, but none of that lowered our enjoyment of the game. This one is a pure win for our group.

Final Score: 4.5 Stars – A great euro game that takes tried and true mechanics and blends them up into an engaging play experience.

Hits:
• Engaging gameplay with lots of decisions to make
• Many paths to victory
• Great production values
• Scales well from 2-4
• Lots of replay value

Misses:
• Minimal player interaction
• You seen most things before