We review Gorus Maximus, a trick-taking game where players will play gladiators cards of specific schools (suits) and will try to gain the most crowd favour in a round to gain a support token. The first player to gain 3 support tokens wins. 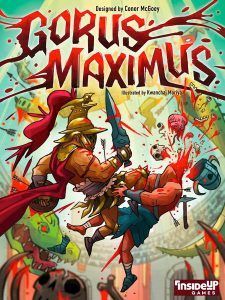 I think I gravitate and enjoy trick-taking games because you try to play the best card available each hand and you really don’t need to read the other players like poker. You can just sit back, enjoy, and not overthink things. Plus, I can play most with my family, friends, and gaming group. Some of the trick-taking games in our current rotation are games like Papayoo, Uno, and Go-Fish with my family, Spades, Hearts, Gin with friends, and Fox in the Forest, Diamonds, and Nyet! with my gaming group.

This brings us to today’s review Gorus Maximus from Inside Up Games. This is a trick-taking game where players will play gladiators (cards), try to gain the most positive crowd favor (CF), and gain 3 support tokens to win. Is Gorus Maximus another great trick-taking game I can add to my family, friends, and gamer group? Read on!

Gorus Maximus is a trick-taking game for 1-8 players which plays in about 30 minutes and is best with 3+ players.

After the player count is determined and the different decks are shuffled and dealt to the players, play begins left of the dealer. The first card played becomes the preferred school (trump), which is marked for clarity.

Like most trick-taking games, players must follow the gladiator school played and if they do not have that they can play any card or the preferred school card to win the hand. The preferred school can change if a player plays the same numbered card as the player before them; then that suit becomes preferred.

Gladiator cards will have a positive, negative, or no CF value. Players will be winning bouts (hands) and collecting gladiators. At the end of the round, players will count up the CF value on the gladiators they collected and the player with the highest wins 1 CF token. The first player to earn 3 CF tokens wins the game.

Gorus Maximus is a very easy game to pick up and play. The rules are not complex and it builds on previous trick-taking games that use similar mechanics. The game does use different terminology, but it’s easy to wrap your head around when learning.

The hardest thing about learning the rules is, unfortunately, reading the rulebook. The rules for Gorus Maximus come in multiple languages and it uses overly complicated language to describe the gameplay. I wonder if something was lost in translation because I had to turn to some how-to-play videos to be sure I was playing the game correctly because the rulebook was not clear.

I will say even though Gorus Maximus is on the lighter side it has a surprising amount of strategy to it. You need to be very careful about which gladiators and bouts you want to win. Some gladiators have positive values but you really want to avoid the ones with negative CF values. One or two -4 CF can sink a round for you, so players really need to focus and pay attention or just get used to losing.

I was able to play Gorus Maximus with some friends and my gamer group but avoided playing with my family. Personally, I don’t have an issue with the violent imagery on the gladiator cards but Gorus Maximus’ age range is PG-13. It’s because of that that my wife was turned off and so my family didn’t play it. I think my family would have liked it mechanically but the violent images and gore will likely turn off some players and is not ideal as a family game.

The last positive about Gorus Maximus is that this game can be played at higher player counts unlike traditional trick-taking games that are typically fixed at 4-players. It was a nice change of pace to not playing at a set 4 player count and not have the gameplay diminish at different counts. With the variable set-up rules for gladiators and schools, Gorus Maximus plays well at lower player counts like 3-4 and really shines at 5+. There are solo and two-player rules but I didn’t enjoy those player counts.

Most fans of trick-taking games should be happy to know that Gorus Maximus should be fast to the table and easy to teach since it uses classic trick-taking mechanics. I think most gamers (new and old) will be surprised at the level of strategy and love the fact that it plays well at 3-8 player counts and seems to shine at 5+.

Unfortunately, some will be turned off by the rulebook in Gorus Maximus, which seems to have overly complicated language and might have had something lost in translation. Also, this is likely not a family game and might even turn off some gamers since it uses violent and gory imagery on the gladiator cards.

Misses:
• Rule book could be clearer
• PG-13 age rating due to violent card images
• Only a filler game for hardcore gamers