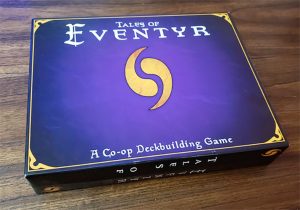 The standard introduction for a game which incorporates deck building will talk about how every game tries to find a niche. With so many games on the market, it’s easy to pass up even the flash-in-the-pan titles and stick to the tried and true formulae. There are just too many games to belabor nuance.

Such was this reviewer’s opinion when it came to deck building. So many games have been released that do so many similar things, that even the shades of gray begin to blend. When learning a new game, usually the same rules queries get asked just to confirm how game A distinguishes itself from game B.

However, what can be said is that the deckbuilding mechanism, when properly done, is invigorating and enjoyable with each turn. Such is the hope of Tales of Eventyr (hereafter referred to as Eventyr), a Game Crafter published title from Andrew Courtright and Jeremy Hulse. It’s a cooperative deckbuilding adventure game for (from the web site) 3-4 players. The play works fine with 2-players, but options and survivability might be limited.

The theme of Tales of Eventyr influences the mechanisms. Players are adventurers in the wide-open world of Eventyr with local various dangers waiting to be overcome. As such, in roleplaying style, players choose a race and a class option. These choices add starting cards to a player’s deck.

As deck building games go, there’s no rocket science or dramatic innovation here. Players will play as much of their hand of cards as they wish then discard the rest. At the end of their turn, players refill their hand.

Card purchases are made from three sources. A player’s race and class provide cards that can be purchased by that player only. These could be duplicates of starting card choices made at the beginning of the game or new cards with new powers. A player can also purchase extremely necessary cards from a central market of items and skills.

The opposition to players comes from the Enemy deck, which affects players each turn as enemies deploy, deal damage, and then retreat. In this way, the enemies cycle through a common pile much the same way players do.

Enemy types can vary widely with a smorgasbord of goblins, bandits, skeletons, demons, and more. The rules for each scenario in the campaign dictate which cards should be used to build the enemy deck. Across the campaign, the enemies get progressively harder but, players will also be able to trim and boost their decks with advanced cards.

To win a scenario, players must defeat enemies until there are fewer enemies in the deck than players. The familiar pattern for each game revolves around players acquiring the right card choices early after a slow steady stream of enemy attacks. At some point, the power curve of the players is just right, but also, the enemy deck thins out to only the hardest beasties (the ones the players retreated from).

After eight scenarios, players can say they’ve “beaten” all that Eventyr has to offer, or play again with different choices in race, classes or skills.

The last two paragraphs of the preceding section sum up what is most enchanting about Tales of Eventyr. The game is designed clearly by lovers of roleplaying choices. These choices make the game personal to a player and drive the same kind of imagined narrative as RPGs. It’s truly shocking to this reviewer that there are so few games that implement this idiom, and none in recent memory. Even some of the most popular current games (looking at you Clank!) took years to implement character class choices to prime the starting decks of players.

What Eventyr offers is straight up cooperative fun in a manner that would be expected from giants of the industry. Dungeons & Dragons and Pathfinder designers should be taking notes. This is exactly the model they’re expected to start from. It’s simple, it’s fun, and it works.

Likely, the Tales of Eventyr designers have turned to game reviewers to increase the visibility of this title. Indeed, as game reviewers, we are sent games all the time for consideration. When something arrives from “Game Crafter”, it’s a huge crapshoot. It could be a designer who doesn’t want to work with a publisher, or it could be something in such a rough form that it’s better to get straight feedback from random purchases. Indeed, at the time of this review, the game has 0 reviews on Game Crafter.

This is not a game that deserves to languish on Game Crafter. Tales of Eventyr, though short and rough, is an extremely enjoyable game. It doesn’t take any risks, and sometimes its art will cause players to take a knee with stomach discomfort, but the gameplay is as solid as they come.

When this reviewer says the game is rough, players will see it immediately, hopefully from the photos. This ranges from the “once you’ve seen it; it can’t be unseen” font for the rulebook to the swirling mystery of the art palette on many cards. The art is straight from a first week of experimenting with Photoshop filters and the most commonly trafficked font web sites.

What will likely injure players the most is the wording in the rules. It’s awkward at times and often the rules choose to briefly explain a topic when a lengthier explanation would go over better (with an example). Board game players often need a certain level of precision in language and that’s missing.

Tales of Eventyr is fun. Lovers of adventure and lovers of deck building who have for years wanted to hook up with just the right game but don’t need the committed long term relationship of Gloomhaven should take a look. Those who only prefer the most highly polished of titles to lovingly display on their Kallax should not. It’s a rough and tumble experience like playing a DM’s homebrew campaign world as a deck building game, but that’s also the charm. In a crowded field, Tales of Eventyr indeed strikes from the shadows with a solid and fun experience.

Final Score: 3.5 Stars – With some polish and a more appropriate price tag, it offers a solid deckbuilding as roleplaying game in a box.