We review Sushi Roll, a dice drafting game published by Gamewright Games. Sushi Roll is a riff on the popular card drafting game Sushi Go and tasks players with earning points by drafting dice instead of cards. 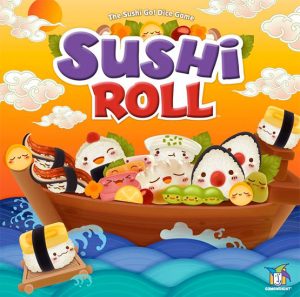 Sushi Go! (review here) is probably near the top of my list for family-friendly, card drafting games. It’s easy to teach, scales well, and is fun to play. So when I heard that publisher Gamewright Games had released a dice version of this popular game, I couldn’t wait for it to roll onto my table. Is this one simply Sushi Go! with dice or is there more than meets the eye? Let’s find out!

Sushi Roll is a dice drafting game for 2-5 players that takes about 20 minutes to play. Sushi Roll plays well at all player counts.

Sushi Roll is played over three rounds of dice drafting. At the start of each round, players collect and roll a set number of dice. Then, starting with the first player, each player takes a turn drafting one dice from their roll. Once each player has taken a turn, the dice are all passed to the left, rerolled, and players draft another die. This continues until all dice have been drafted.

At the end of the round, scores are totaled based on which dice each player drafted. Some will earn you flat points, others will give you points for the majority, and some will give you points based on how many of them you have. In addition to the point scoring dice, there are two special dice that can be used during the drafting phase to either collect reroll tokens or swap a die with another player (only one that has not been drafted yet).

After three rounds of drafting, points are totaled and the player with the most points is the winner.

When I first read the rules for Sushi Roll, I admit, I was a tad underwhelmed. It felt a LOT like Sushi Go!, but with dice (more about that in a bit). But after a couple of plays, I realized that there are some things that Sushi Roll definitely does better than its older brother. Normally I don’t like to spend too much time comparing one game to another in a review, but since these two titles are so similar, I’ll intersperse some comparisons where appropriate.

Sushi Roll combines a whimsical family-friendly theme with some nice, easy to learn rules. The player boards conveniently spell out not only how each die scores points, but the faces of each of the dice (so you know the odds of rolling something). This really went a long way into helping teach the game. In fact, it’s easier to teach this than Sushi Go! since all the information is open. A new player doesn’t have to worry about giving up the contents of their hand with a rules question.

Another thing that helps to set this one apart is the player interaction. The fact that all the information is open means you don’t have to remember the contents of each hand. You can look across the table and not only see what’s coming to you in future turns, but how many of each dice type are on the table. This is helpful when it comes to the chopsticks tokens.

These tokens can be as helpful or as mean as you want them to be. I’ve seen players take the hate drafting to the utmost by swiping a die that they knew a player needed. But even if you aren’t in the mood to be mean, the chopsticks are great at finishing off that set you really have been trying for. In fact, since you aren’t just stealing dice, but swapping them, I’ve purposely swapped with the player to my right and given them a die I wanted, so it would get passed back to me at the start of the next turn!

The one area where Sushi Roll is outclassed by Sushi Go! is at the higher end of the player count. Since each player takes a turn one at a time, the 5 player count can take a bit longer, with more downtime. Since Sushi Go! has simultaneous turns, this isn’t an issue for that title. Yet at the lower player counts, the higher interaction makes me give the nod to Sushi Roll.

I was prepared to write off Sushi Roll as an unnecessary Sushi Go! spinoff, but I’m glad I didn’t. Truth be told, I actually ended up liking this one better than the original. Both the ease of teaching and the increased player interaction made this one an all around win for me. The one thing that it’s really missing is the extra variety that’s seen in Sushi Go Party (the excellent follow up to Sushi Go!). Hopefully, that will come down the line in the future via expansions. But for now, Sushi Roll is an excellent adaption of an already great family friendly game. While I probably don’t feel the need to own both Sushi Go! and Sushi Roll, I’m happy to keep both Sushi Roll (to play with new gamers) and Sushi Go Party (to play when we need a bit more depth).