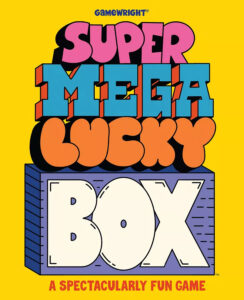 It’s hard to believe that game designer Phil Walker-Harding has been creating board games since 2007. I first took note of one of his titles in 2013 with the excellent card drafting game Sushi Go!. Yet it was his release of Barenpark and Gizmos that really cemented him as a designer that can make both highly accessible and deeply entertaining board games.

Today we are going to take a look at one of his newest offerings, Super Mega Lucky Box, a flip and write board game that will have players crossing off numbers to try and earn the most points. So grab your dobbers as we checking out this quick playing game.

Super Mega Lucky Box takes place over four rounds, with a scoring round in between each of them. Each player starts the game with 3 Lucky Box cards. These have a 3×4 grid of a number on them, with the end of the rows and columns containing bonuses.

The number deck in the game contains 18 cards numbered 1-9 (two copies of each digit). This is shuffled and 9 cards are dealt into a draw deck for the round. Each turn, the top card is flipped over and all players may cross off that space on one of their cards. If a player completes a row or column, they earn any bonuses listed at the end of the row/column. These range from free numbers to cross off or bonus symbols.

There are three types of bonus symbols: Stars are set collection goals for the round. The more stars you collect each round, the more points you earn. Moons are tallied as the end of the game, with the player who collected the most gaining 6 points, and the player with the least losing 6 points. Finally, the lighting bolts can be cashed in to change a number being used + or – 1 number.

If a player completes a card, they earn points based on the round number, with earlier rounds earning more points. Between rounds, each player gets a new card to add to their set. I should note that you can work on cards from round to round until you finish them. After the fourth round, scores are tallied and the older with the most points wins.

When Super Mega Lucky Box showed up on my doorstep, I was immediately skeptical. It’s a themeless game that looked like a mass-market title. Other than some bright colors and cute fonts, there isn’t any art to speak of. If it wasn’t for Walker-Harding’s name on the box, I probably would have tossed this to the very back of the review queue.

Yet darned if Walker-Harding hasn’t done it again. The concept of Super Mega Lucky Box is so simple. Cross off a number, earn some bonuses, score points. Yup, this is bingo through and through. But fun bingo. With at least 3 cards to choose from each turn, you will need to make decisions of which card to cross off the number on. But even that isn’t a simple decision. You’ll need to consider the bonuses each row/column provides. Do I want stars for set collection? Or maybe I need to stock up on those all-important lightning bolts. Or perhaps finishing a row will grant you a bonus number that will let you chain complete a few different rows. There are a lot of possibilities here.

Without the bonus for completing rows/columns, the game would be terrible. Well, I’d be Bingo I guess. So that little tweak really elevates the game from a lackluster also-ran to something that can keep you entertained for the length of its play.

Not that I’m saying Super Mega Lucky Box is some deep, gaming experience. This is a filler game that you can play in 20 minutes. But it’s also a game you can play with just about anyone. Kids, neighbors, parents, this game defines the term “non-gamer friendly”. Yet even your gaming group can have fun with this one. We’ve found it a perfect title to close out the night as it’s light enough where the rules explanation takes minutes, making it super easy to get to the table.

I honestly don’t have many complaints with Super Mega Lucky Box. The biggest knock against it is right there in its title. Luck will definitely be a factor in this game. If you really need a 9 to show up, there is no guarantee you will ever get one. There will also be times when a number comes up that you don’t have on any of your cards. That kind of sucks as there are only 36 turns in the game. However, that’s also why managing your supply of lighting bolts is crucial during the game. It’s the only way to help mitigate bad draws.

Super Mega Lucky Box takes a lot of tried and true concepts: roll and write, set collection, combos, and combines it into a fun little package. What looked like a crappy mass-market title ended up being a suburb filler game that you can play with just about anyone—gamer and non-gamer alike. If you ever played a game of Bingo and thought it was neat, but ultimately lacking, Super Mega Lucky Box will delight you for sure.

Final Score: 4 Stars – An entertaining and highly accessible filler game that can be played with just about anyone.

Hits:
• Bingo, yet not sucky!
• Light yet fun decision making
• Easy to learn, quick to play

Misses:
• Sometimes bad luck can put you behind the 8 ball