We review the board game Super Dungeon Explore by Cool Mini or Not. A dungeon craw board game that tries to replicate old the quarter slurping video games. 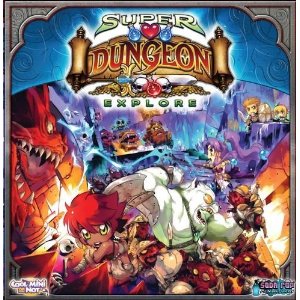 I’ll get right too it. Never before has a game that had so much potential fallen so flat for me. When you look at Super Dungeon Explore

, the artwork is just gorgeous. Bright, vivid colors; cute chibi art style; excellently sculpted minis (although they take forever to assemble, more on that later); and tons of high quality components. However, that’s where the praise dies a horrible, fiery death.  If you don’t want to read any farther, than I’ll leave you with this important takeaway: don’t waste your money on this game.

Super Dungeon Explore is a dungeon crawling adventure for 2-6 players. One player takes on the role of the Consul (he runs the monsters), while the other player each choose a hero. In standard dungeon crawl fashion, each player gets a turn activating their hero or monsters. The players are trying to take out the Consul’s minions and level up for their final confrontation with the boss.
The game draws some heavy inspiration from video game dungeon crawlers, such as Gauntlet. If the players can wade though the Consul’s endless minions and take out the end boss, they will be the victors.

As stated earlier, the components are great and the artwork is fantastic. The miniatures look amazing when finally assembled. That’s right, you don’t get molded, plastic minis. What you get are a pile of minis in a ton different pieces. Fortunately for me, I acquired this game in a trade, so my minis were already put together. However, some quick research tells me people area spending, roughly, 2-3 hours putting their minis together.
That’s right, 2-3 hours to put your game together. Why they didn’t go with the molded, soft plastic minis that just about every other game on the planet uses is beyond me. They also used hard plastic, so the minis can actually break if dropped from high enough. A very poor choice by game publisher Cool Mini or Not.

However, I could live with all that if the game was great. Unfortunately, it wasn’t. In my group of friends, I’m usually the rule book guy. I get handed the book to learn the rules and am expected to explain the game to everyone else. I’ve gotten pretty good at it over the years. Yet I must have read this rule book 3-4 times and I’m still not 100% sure on how to play the game. This was, without a doubt, the worst laid out rule book I’ve ever seen. It was all over the place. Specific rules appeared in odd spots and the overall book didn’t have much flow to it. During our first game we constantly had to stop to look up rules, if we could even find them.
Also, a lot of the rules are quite vaguely worded, or in really weird spots and easy to overlook. Important rules are often tacked on to the end of paragraphs, as if an after thought. Other rules are just missing, or assume you’ll be able to figure out instead of explicitly telling you what to do. Even after two of us reading through the book, we are still no sure if we were playing the game 100% right.

So how do you play. Well, I mostly know. The basics are: one player takes on the job of running the bad guys, the Consul. The other players, up to 5, each select a hero they will run through the dungeon.
The Consul sets up a the map and a series of spawn points in each room. It’s the hero’s job to destroy those spawn points and summon the evil end boss. If they can kill him and they win. If the Consul kills all the hero’s he wins. Pretty standard.
The game tries to replicate the feeling from the old video games with waves of never ending bad guys. Each round, the Consul can spawn a number of enemies from the spawn points and they relentlessly trek towards the heroes. As the heroes hit and kill the monsters, the loot and power meter go up. This was actually a neat idea in the game. At certain points on the loot track, the heroes get to draw a treasure card and help power themselves up. Fun!
The power track also works as a time meter. As it fills up, the end boss gets closer to making an appearance. If the heroes don’t spawn him before that meter fills up, he comes anyway, but as a somewhat stronger version.
Attacks and damage are done by rolling opposing dice. The dice system is pretty unique and I kind of liked it. However, it wasn’t explained very well in  the rules and it’s not 100% intuitive. Once you get used to it, though, it’s not a bad system. While rolling, you can damage to the bad guy by rolling more attacks icons then he does defense icons. However, there is also a potion icon, and if you get that, you get to collect a potion (which is used to activate special abilities).

Turns consist mainly of moving characters and using their power points to attack or open chests.
That’s that basics of how to play, at least from what we can tell. We did require many references to the rule book that helped grind the game down to a sluggish pace.

For all its faults, I wish I could say we had fun playing Super Dungeon Explore. Sadly, we didn’t. While the components are artwork are what probably will sell this game, the game play is pretty bad. Bogged down with some poor or confusing rules, we had a hard time getting into the flow of this game.
In our first game, the heroes never even made it out of the first room even. They ended up in the doorway at a bottleneck fighting some monsters. I, as the Consul, had almost every figure out on the board near the end of our game. At one point I even stopped moving most of them because they would never make it throughout he bottleneck.
By the time the power meter filled up and the end boss was spawned, the heroes had only killed 1 spawn point. There were at least 2 dozen monsters on the board then, in addition to the end boss. At this point, we had been playing this train wreck for a good 2 hours. We looked at the board and each other and decided to pack it up then. Feeling like we just wasted a few hours that could have easily been spent playing a fun game we were happy to see this dud go back in the box and forget it ever happened.
Situations like that should never happen in a good board game. Solid play testing and well thought out rules should really take care of any of that. I feel that Cool Mini or Not was looking to sell some great looking miniatures so they made it into a game. Unfortunately, we more time was spent on the components than the actual game play. I don’t care how sexy a game looks, if it isn’t fun, then there isn’t much point in playing it.

Well by now, you should have very little questions remaining on what I thought of this game. I hated it. Which is sad, because I love dungeon crawlers. It’s rare that a game falls so flat for me. I have zero desire to ever try this game again.
The only plus I can really think of for this game is the great components. The visuals and miniature sculptures really are top notch. The dice and combat system also wasn’t too bad, once you can get a feel for it. However, that does take some time and isn’t the most intuitive.
Yet, those are very far from offsetting the drab game play, horrendous rule book and time wasted assembling the figures. And too make matters worse, this game clocks in with a 3-5 hour playing time and a $100 price tag. For that amount of time and money there are MANY other games that are much more fun. Do yourself a favor and steer clear of Super Dungeon Explore.

If you are interested in punishing yourself and want to get a copy, it’s about $100

Final Score: 1.5 Stars – Got a few points for the great artwork and components. Not many other redeeming qualities.