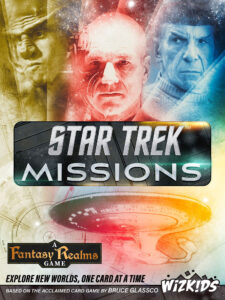 In 2017, WizKids Games published a little combo builder called Fantasy Realms. To be honest, I had not even heard of this title until Red Rising was released last year. Publisher Stonemaier Games said his inspiration for Red Rising was based on Fantasy Realms. I’m not sure if that bit of publicity helped the remaining copies of Fantasy Realms fly off store shelves, but WizKids has gone back to the well in their newest game.

Leaving the trappings of fantasy behind for sci-fi, the newest theme for a fantasy realms inspired game is Star Trek: Missions. While not a straight-up reskin, Star Trek: Missions does not hide in one bit that it’s based on Fantasy Realms. In fact, it even has the same designer: Bruce Glassco and clearly states it on the box cover. Is this a worthy successor? Let’s find out.

As I mentioned above, I have not played Fantasy Realms, but I did read up on it to prepare for this review. From my research, it appears that there are two things different in Star Trek: Missions. First, instead of one deck, there are now two: a galaxy deck, and a new (smaller) mission deck. The other thing is that none of the cards in Star Trek: Missions has a default point value. Every card needs some other card to score points.

The game ends when there are either 8 galaxy or 12 mission cards in the discard area. The player with the most points is the winner.

Star Trek: Missions is a pretty streamlined game with its main mechanics being draw a card and then discard a card. It appears that this version has upped the complexity a tad over fantasy realms though. Players now have two decks to contend with, so a decision must be made on which decks you will draw from. To be honest, I’m not quite sure why there are even two decks, as mission and galaxy cards both kind of do the same thing. The only difference seems to be that mission cards don’t have any icons on them, so they can’t help other cards score. And you are required to always have at least one of them, but not more than two.

Speaking of the icons, that’s how most all cards will score. Every card belongs to one of four different categories, each of which may be broken down into subsets. For example, Riker is a personnel card that has icons for the specialty (command), lifeforms (human), and affiliation (federation) categories. So, he could potentially score points for any of those keywords depending on which scoring card is looking at him. What this does is create a plethora of ways to earn points.

Perhaps you get the Chancellor Gowron card early which scores you 5 points for every Klingon lifeform and Klingon affiliation card. This will have you searching the draw deck or dumpster diving in the discard pile for those cards. The nice thing is that your hand is always kept secret, so unless your opponents are paying attaching to what you pull from the discard pile, they won’t necessarily know to keep those cards from you.

This style of play is a bit of a change from base Fantasy Realms (and Red Rising) where a card usually had a base amount, say 20 points, before adding in a bonus for comboing with other cards. Personally, I think this change is a bit of a step back in game design. On one hand, it can optionally create more combos but then you are also more dependent on the luck of the draw. For example, the Lt. Commander Data card is worth nothing on his own. He provides up to 10 icons and subsets on his card, but doesn’t score himself in any way. Or there is the Traveler card which scores 10 points each for having Wesley Crusher and the Engine room card. If you don’t end up finding those cards, he’s worth nothing. Too many times in our games we had cards end up worthless because we couldn’t find the right cards.

Those grumbles aside, I will say that the overall gameplay loop is pretty fun. I’m a fan of creating card combos and Star Trek: Missions has that in spades. I also liked that the discard area could be searched through instead of drawing blindly. This ups your chances of finding the cards you need. However, much like I mentioned in my Red Rising review, a lot of times the overall strategy of your game will be dependent on the cards you start with in the opening draw. There isn’t always time to find a whole hand of new cards.

Finally, let’s talk about the art in this game. The art in Fantasy Realms was… not great. Star Trek: Missions decided to skip the illustrations entirely and use photos from the show. Normally, while not a big fan of this tactic, I’m also not too critical of it. But for some reason, the designer decided to put a cheesy photoshop overlay gradient on every piece of art. It looks kind of garish and I’m not really seeing the point for it. But the rest of the components are perfectly serviceable.

I’m not really sure if Star Trek: Missions is an upgrade or a downgrade from Fantasy Realms. I’m more of a Star Wars guy, so the theme doesn’t do much for me. Granted it’s pasted on anyway. But while not perfect, we did have fun playing the game and also appreciated how quickly the games went. We could easily get in a game in 15 or 20 minutes. That being said, this one felt somewhat dependent on the luck of the draw as none of the cards can score on their own. But if you are a fan of creating card combos, Star Trek: Missions is worth a look.

Final Score: 3.5 Stars – Easy to play mechanics combined with lots of comboing, even if the theme is pasted on.

Hits:
• Easy to get to the table
• Lots of card combos to make
• Quick play time

Misses:
• Cards don’t score on their own
• Why two separate decks?
• That photoshop filter…