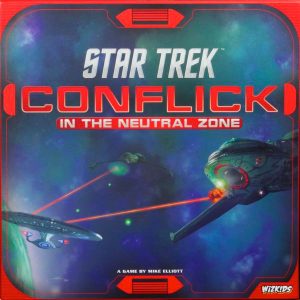 There are two facts I can lay down right away for you. I love dexterity games and I love a good pun name. That’s why I was immediately interested in checking out Star Trek: Conflick in the Neutral Zone from WizKids Games. Not only does WizKids publish one of my favorite flicking games ever (Seal Team Flix), but I also love the Star Trek universe (although it’s no Star Wars…). So set your phasers to fun as we check out Star Trek: Conflick in the Neutral Zone.

The goal in Star Trek: Conflick in the Neutral Zone is to be the first player to reach 10 command points. To reach that lofty goal, players will alternate taking turns commanding their fleet. On a player’s turn, they first collect resources from their ships that survived their opponent’s turn on a planet. Any collector ships on a yellow planet harvest a dilithium crystal and any on a purple planet harvest a command point. Dilithium crystals can be spent to purchase new ships from the market. Although players start with either Federation or Klingon ships, they can buy ships of any faction.

You can then deploy up to two new collector or attack ships. Round collector ships are only useful for harvesting and can’t attack. Conversely, attack ships can only…well attack. To destroy a ship, you must flick an attack ship into it and either knock it off a planet (if a collector) or of the board (if an attack ship). You earn one command point for destroying a ship. Destroyed ships go to the opponent’s shipyard to be deployed again on a later turn.

Players can also place or flick asteroids at the end of their turn. They can’t destroy anything with it, but it’s useful as blocking terrain. Turns will go by in this manner until one player reaches 10 command points and wins.

As with any licensed game, Star Trek: Conflick in the Neutral Zone had a big potential to be nothing more than a shallow game with minimal effort put into the ruleset, simply relying on the love to Star Trek fans sell copies. Well, I can safely say that Conflick in the Neutral Zone has fully embraced that concept. The game did a great job of quickly stomping out my enthusiasm after the first play.

Did I have high expectations? Maybe a little, but that’s only because Mike Elliot is an accomplished game designer (Dice Masters, Thunderstone, Shadowrun: Crossfire) and WizKids Games makes one of my favorite flicking games ever in Seal Team Flix. But, frankly, Star Trek: Conflick in the Neutral Zone feels like Mike was looking for an easy paycheck and handed in a game he came up with on the drive back from Gen Con this year.

So where to start. First, the rulebook feels incomplete. There were several rules questions that came up and I had to hop online for but wasn’t able to answers. For instance, what happens to ships knocked around by an asteroid? Does it stay where it landed or is it returned to its original spot? Another example would be that the first player to 10 points wins the game at the end of the round. But what happens if more than one player hits 10 points? The rulebook has no rules for a tiebreaker. I struggle to see how that could not have come up during playtesting. ¯\_(ツ)_/¯

There are also a lot of vague worded ship powers. Be prepared for some house ruling here to keep the game moving. Speaking of the ships, I do like that many have abilities (albeit nothing tying them to their source material) but HATE that you can recruit ships from other empires. I start off as Federation, but can recruit Klingon ships? The rulebook handwaves this away by saying you are “salvaging” it, but I didn’t like it. It felt lazy.

One of the biggest problems with the game is its player scaling. The game is virtually unplayable at 3 players. To harvest anything, you must have a collector on a planet at the start of your turn. There is no way a ship is going to survive two opponent turns on a planet. Games will grind to a halt as no one gets income or points (beyond the 1 minimum).

Maybe I’m being a tad harsh with Star Trek: Conflick in the Neutral Zone. I mean, it is a casual flicking game and at two players, it works…fine. If you can get past the rules ambiguities and remember which ship is yours, then there is fun to be had here for a casual romp in the neutral zone. But it wasn’t one I was too interested in jumping back into.

After a number of plays of Star Trek: Conflick in the Neutral Zone, I’m wholly ready to not play it anymore. It was fine at two players, but dreadful at 3. While I love dexterity games, especially flicking games, even a beloved Star Trek license couldn’t keep my interest in this one. The theme is 100% pasted on with nothing here tying the theme to mechanics, so even being a Trekkie isn’t going to keep you going. For a fun Star Trek fix, there are way better games. For a great flicking dexterity game, go play Seal Team Flix or Ice Cool (if you want something more casual). But this one is best left in the neutral zone.

Final Score: 2 stars – A game that had potential but feels rushed to market and somewhat unfinished.

Misses:
• Rulebook is missing rules
• Game is unplayable with 3 players
• Some ship powers are vaguely worded