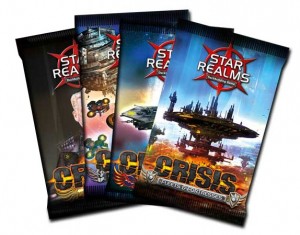 Star Realms, released in 2014, has been highly praised for being a new take on the deck building mechanic. Focused on a two-player game where players directly attack each other, it’s a significant change from multiplayer-solitaire deck builders like Dominion. My review here compared Star Realms to Magic: The Gathering, but without a significant investment in both cards and time learning to game.

The first expansion, or expansions, for Star Realms is Crisis. Released in four separate booster packs, it’s possible to purchase only parts of the new cards. We will look at the contents of each pack, what it adds, and if you should be adding these to your Star Realms game.

First up, Bases & Battleships adds twelve cards that will be instantly familiar to Star Realms veterans. Blob and Star Empire both get two copies of a new base and a new ship. Machine Cult and Trade Federation have two new ships, one with two copies in the expansion pack. While there is nothing Earth-shatteringly new about these cards, they do have a couple new wrinkles. For example, some of the new cards allow bases in play to be returned to their owner’s hand or allow bases to be put directly into play when purchased.

Fleets and Fortresses is similar in that there are no new card types. Each faction gets a new base and two copies of a new ship. The bases in particular are mostly expensive and extremely powerful. That is, except for the four-cost Machine Cult base that seems strangely underpowered. The ships abilities all are similar to abilities in the base game. This one seems like more of the same and I would say more so than Base & Battleships. This isn’t necessarily bad if you love Star Realms, but don’t expect any surprises here.

The Crisis expansion Heroes adds a new card type to Star Realms. In addition to bases and ships, Hero characters are shuffled into the main deck and available to purchase just like other cards. However, the Hero cards do not go into your discard when purchased, they are put into play immediately. Each Hero is allied with one of the four factions and has their own ability. The only way to activate the ability and get the ally bonus is to scrap the Hero. Functionally, it’s a card you get to use one time only, but they are cheap, only costing 1 or 2 points of trade.

Finally, last up is the Events expansion. These twelve cards are also shuffled into the main deck. When added to the trade row, the event happens immediately and is discarded. All events affect both players, although not necessarily in a symmetrical way. For example, the Trade Mission event adds 4 trade for the current player and allows them to add the next ship purchased to the top of their deck. The other player gets to immediately draw two cards.

Between the tabletop and iOS versions of the game, I’ve played Star Realms dozens, maybe hundreds of times. The base game cards are incredibly familiar and the strategies and synergies available are well known. In that respect, the Crisis expansions packs do a good job of adding to the existing card pool. The new ships and bases build upon strategies and open up a couple more options, although the most powerful cards only have 1 copy in a deck that is now 128 cards deep if you use all the expansions. You certainly may not see them very often.

While Fleets & Fortresses and Bases & Battleships add more of the same, adding the Heroes to the deck adds an interesting mechanic to the game. It’s hard to say if spending 2 trade on Hero is better or worse than just buying an Explorer, but the option to just turn on ally abilities at will, even if only once, can be very powerful. Because they go directly into play and cannot be attacked, you can count on the Hero being useful at some point, without diluting your deck with less powerful cards. The Crisis: Heroes expansion is by far my favorite, adding a little diversity and depth to Star Realms.

If you really want to mix it up, the Events expansion will add a bit more randomness. Personally, I found this expansion to be the least enjoyable. Star Realms, like all deckbuilders, already has a fair amount of luck involved. If you re-shuffle and draw a terrible hand, it can set you back potentially far enough that you can never recover. Draw a great hand with cards that have some good synergy and you can end the game quickly. The event cards often favor one player over the other. Even if the impact appears to be the same for each player, happening in the middle of one players turn, but before the start of the other players can make a big difference in how useful it will be.

Overall, the Crisis expansions packs are a good addition to a great game. Interestingly, the choice to release them as separate booster packs means you can pick and choose which parts interest you if you aren’t sure you need the entire 48 new cards.

Anyone who enjoys Star Realms should pick up the Heroes booster pack. It adds variety and interest without adding any significant overhead in terms of rules. In fact, there are no additional rules in any of the expansions; everything you need to know is printed directly on the cards.

As far as the others go, I could take them or leave them. If you, like me, have played enough games of Star Realms to know all the ships, the Fleets & Fortresses and Bases & Battleships expansions will add a little variety in an otherwise familiar deck of cards.

Otherwise, you probably won’t be able to tell these new cards from cards in the base game and can probably do without watering it down. I wouldn’t recommend the Events expansion to anyone. Maybe it is more interesting in a multiplayer variant, but in the two-player standard game the impact of the events is more than I care to see.

If you are interested in getting a copy for yourself, each pack sells for about $5 each.

Expansion Score: Optional – Depending on what you are looking for, the Crisis expansion ranges from more of the same to really unique to why did they make that.

Hits:
• Heroes adds a new card type and fits in existing game seamlessly
• No additional rules to learn
• More ships and bases to add variety for those that know the base game

Misses:
• Events add unneeded randomness
• If you aren’t a Star Realms fanatic, you probably won’t be able to pick the expansion ships out from the base game.