We review Spirit Island, a cooperative board game published by Greater than Games. In Spirit Island, players must work together to stop the invading people from blighting the native island. 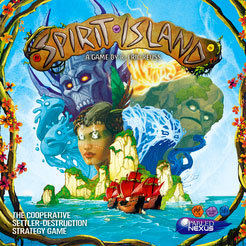 The natives are growing restless. Explorers from afar have come to the island, deforesting the jungles and strip mining the mountains, damaging the island in the name of colonization. In doing so, they have awoken ancient spirits of the island who seek to restore balance.

Spirit Island is a 1-4 player cooperative strategy game, where players become these spirits of the island, working together to bring peace once more to the island.

A round in Spirit Island will generally consist of spirits having a growth phase and an action phase. Invaders then have their phase and, lastly, a second spirit action phase takes place. The game ends with players meeting their current victory condition, losing by having their spirit presence removed completely from the board, the island being too heavily damaged, or the invader action deck runs out. Let’s take a look at some examples.

During the growth phase, players will be able to select an action from the top of their player boards. This might include adding presence, which can increase range for spirit actions or allow for special actions, adding new cards to your hand, or adding energy, which will be needed to play cards. Smart timing and hand management can also reward players with innate abilities that can destroy towns and cities, increase defenses, and reveal fear cards, just to name a few.

This is where the mental exercise comes in, trying to budget energy to play cards, ensure that those cards have elements that’ll allow you to activate innate abilities and execute actions efficiently. For example, the spirit Lightning’s Swift Strike could place presence, gain energy, and play enough cards from their opening hand to destroy a town, all on their first turn. Any cards or innate abilities considered fast will resolve before the next phase.

Before the invaders take their turn, any fear cards earned through destroying towns and cities, or other means will be resolved. These offer one-time bonuses to aid spirits, such as removing invaders, boosting damage the natives can do, or adding defense to a particular province.

Next, invaders take their actions, which include ravaging, building, and exploring, in that order. Exploring adds invaders to coastal provinces and attached areas with towns or cities. Building adds a town or city to a populated area. Ravaging will cause damage to those areas where invaders are present. These cards progress, allowing players to see what actions invaders will take next, but what area will be explored next will remain a mystery until the next round. The challenge of invader actions grows as the game goes on. Where early on invaders might only explore jungles, later they can expand to all coastal provinces. The challenges will grow with each turn and if the drumbeat of colonization is left unchecked, the invaders will damage the island beyond hope.

Lastly, spirits take their slow actions, resolving any cards or abilities, such as pushing invaders into another province to avoid later difficulties and gathering natives. Once this is finished, the round ends and a new one begins.

This game advertises itself as a cooperative game and that’s true to an extent. Opportunities can present themselves for spirits to help one another. But there can be limitations on that, either practical or strategic. It’s fair to view this game as a solo cooperative game, almost Euro-like in the sense of parallel play. Players can technically work together. But if everybody can take care of their own business, they don’t really have to.

This game excels as a solo game. It is the primary way I’ve played it. This has been mostly out of necessity since I’m a dad with limited time. The solo option allows players to learn the game at their own pace, take more time for strategic thinking without the pressure of holding up other players, and try their hand at playing multiple spirits, especially those who are designed to support rather than play the main part. The trade-off though in playing multiple spirits is added playtime and mental juggling. Games can usually be completed in an hour and a half or so when managing two spirits. But managing one, especially one players are proficient with, allow them to get in a game under an hour.

The base game offers a lot of variability and replay value that I think is a huge plus. The way the invader actions ramp up and the challenge keeps the strategy ever-changing and also works as a timer. Players can also introduce scenarios and adversaries, which changes objectives and how the game plays, keeping gameplay fresh. There are 8 spirits to choose from which all play differently and can cater somewhat to your play style. In short, there are lots of game options for what you pay.

Learning this game is a bit difficult unless you have a good instructor or friend to help. The rulebook suffers from lack of flow. Step-by-step instructions are somewhat present, but the need to jump around for information detracted from the learning experience. A short definition in a side box rather than back a few pages could have streamlined things. And while having a friend to clarify rules will be helpful, especially if they are playing alongside, this can also lead to quarterbacking if they don’t give players a chance to be autonomous.

With the learning curve in mind, I personally would never have a game with more than two inexperienced players and only four if everyone knows what they are doing. This game can lend itself to serious analysis paralysis. If you have three brand new players and one experienced player, the game is going to last much longer than anyone will enjoy. It’s important to have a good ratio of experienced and new players to make the overall experience enjoyable for everyone.

Have you ever played a game where the rounds consisted of wave after wave of enemies? It’s hard to catch your breath at times! But if you played your cards right, you had these satisfying moments where it felt like you finally had a toehold. That’s what Spirit Island feels like for me. It’s a mental balancing act of risk management against dwindling opportunities for success. It’s a game that challenges and entices you to come back for more. The learning curve can be a barrier to entry, but if it is overcome, there is a mentally stimulating experience to be found in Spirit Island.

Final Score: 4 Stars – A great strategic game with less than ideal instructions and a possible Achilles heel for AP.

Hits:
• Mentally stimulating and strategic
• A lot of options for mixing up play that keeps the game interesting
• Plays great solo

Misses:
• Rulebook could use an overhaul
• AP might affect new players
• Quarterbacking is a likelihood with new- and experienced-mixed groups