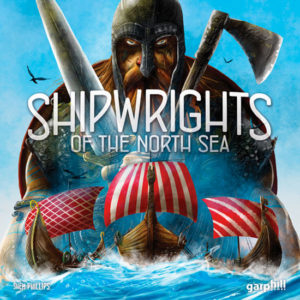 There were these guys from Northern Europe during the early middle ages. They went around in boats raiding, pillaging, trading, and colonizing. All in all, pretty typical stuff for that era. Fast forward through history enough, and publishers get a new game theme trend. Move over pirates, there’s a new gang in town, and they’ve got big ships and disgruntled faces too. By now, gamers probably recognize the tropes of a Vikings game (maybe not people from Minnesota).

Three of those games are designed by Shem Phillips. His game design credits go back to 2009, but he’s made a name for himself recently with the release of a trilogy of Viking themed games. The first of these is Shipwrights of the North Sea, a card game with drafting and resource management for 2-5 players. When played with 2 players, the best player count, it takes an hour. Higher player counts can take up to 90 minutes.

Players will begin by taking player boards which act as placeholders for boats in construction (2 at a time) as well as accommodate a limited number of resources and workers. Players can increase or decrease their worker or resource maximum by constructing ships and buildings from the four resources: gold, wool (sheep), oak, and iron. Some ships will also require a player to have certain specialized worker cards such as a Sail Weaver or Blacksmith.

A round of play begins with a draft of cards (ala 7 Wonders). After this, players can take as many actions as they have resources or cards to do so. An action can be either playing a card (if necessary paying the cost in resources), finishing boat construction by paying the boat’s cost in resources, gaining resources by paying workers and gold or taking the action of various townsfolk cards. Once every player has used or discarded all their cards, the end of the round proceeds with gaining gold income and new workers.

Rounds will repeat in this manner until one player has built four ships. Total victory points are tallied from ships and buildings with a bonus going to the player who has built the most military points of ships.

The “Townsfolk” expansion was examined after experiencing the base game. It provides additional actions that players can take by spending workers. These mitigate some of the weaker actions in the game, such as allowing a player to complete a ship without having an important specialist.

The game experience is highly dependent on whether or players are using the “Townsfolk” expansion (which according to the publisher’s game page, now comes with the game). This review will cover both viewpoints: with and without the expansion.

Overall, the game structure is pretty light and it’s very easy to explain and proceed through a game. The rules can be read and taught within 20 minutes. This is really a great game to teach basic drafting and resource management.

The base game, however, has some fatal flaws. Often, even after the draft, players will have cards they cannot use. This means a turn of doing nothing but discarding cards. All of the ships require some kind of specialist card, and if a player never manages to get that card because other players are grabbing them first, it really results in a negative play experience. This is especially true because players cannot cancel a ship being built to work on another. Amplify this with a full complement of players, all of whom also have opportunities with different attack cards, and it’s not going to be a happy evening.

Here’s where the expansion comes in. It mitigates or fixes everything negative about the base game. All the actions on the included Townsfolk board work to give an opportunity to overcome a limitation present in the base game, including requirements of specialists, preventing attacks, and discarding useless cards for gold. Players who include the expansion won’t be able to say this was the best game ever, but will ultimately come to the conclusion that the expansion should be the default way to play.

Furthermore, Shipwrights of the North Sea offers much more in the way of tactics than strategy. There are lots of ships to build and it’s really impossible to wait for just a certain ship to land in a player’s hand. If another player is building any ship that they receive, the game can be over in the standard play time, but that won’t necessarily mean the best score. Overall, the only thing to plan for are attack cards. They can be a bit mean and set players back a turn or two.

With a lightweight, take-that style game, Shipwrights of the North Sea keeps pace with other better than average titles. It’s got good drafting and resource management mechanisms that requires contingency planning a little bit more than other titles. However, take away the expansion, and Shipwrights of the North Sea is one to leave on the shelf. The Board Game Quest review score reflects playing with the expansion.

Final Score: 3.5 Stars – Playing with the Townsfolk expansion, Vikings get a decent shipbuilding game. Without the expansion, gamers might feel like their game was the target of a Viking raid.