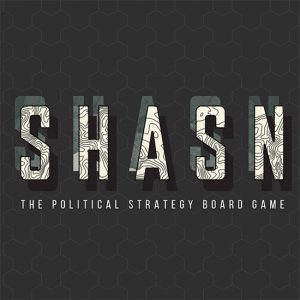 It was back in college where I really became interested in politics and especially political theory. I found politics fascinating and loved learning about key figures of past and present. I was more positive back then as today I’m jaded when it comes to current and local politics. It might be because I have lived in or outside of Chicago all my life. Fact: the roots of Chicago being called “the Windy City” is not because of the weather, it stems from an article around the 1900s about all the hot air that local politicians or “windbags” created. Unfortunately, not much has changed since but I still enjoy studying political theory.

This brings us to today’s preview the area control game Shasn, where players are politicians in a heated election campaign for 3-5 players. It plays in about 90-120 minutes and is for players 12 and up.

The set-up for Shasn is quick and easy. Players will receive 1 of the identical player mats and the associated color bag for their voter pegs. Each player will receive 1 of the four resources: red = clout, green = funds, blue = media, and yellow = trust. Players then vote who will be first players (not themselves).

The player to the right of the active player draws an Ideology card and reads the question on the card aloud, but hides the viable resource rewards (these are two-sided cards). Depending on how the active player answers (yes or no) will determine the ideology they would like and gain them resources.

It should be noted that there are 4 ideologies in Shasn, each are tied to the same resource color above. The Supremo is red and basically has fascist beliefs. The Capitalist is green and focuses on commerce and free trade. The Showman is blue and loves to perform and be outrageous. And finally, the Idealist is yellow and wants to make the world a better place for all.

Players will gain more Ideology cards as the game goes on and if they ever gain 2, 4, or 6 of one type, they will unlock Ideology powers of that color (2 will only unlock a passive power). Players will also gain and spend resources to influence voters or to purchase Conspiracy Cards (these cards are played against your opponents to foil them in some way). Players may also trade resources and even Conspiracy Cards with other players but it’s 1 for 1.

Players influence voters by purchasing Vote Bank cards of 1, 2, or 3 voters which allows them to place that number onto the board into one zone. Since this is an area control game, it is key to getting your unique color voter on the board. The player’s main goal for their voters is to gain a majority (more than 50%) in all zones. Gaining a majority will unlock the Gerrymandering power which allows that player to move voters.

Each zone has a volatile zone marked by a black circle and if a voter peg is placed there, this triggers a Headline Card which is played immediately and applies to the player that triggered it. These cards typically have some risk and reward to them.

I was looking forward to playing an area control game about an election and Shasn did not disappoint. From the start, you’re immersed into the election campaign theme from trying to control zones with your voters, to trying to foil your opponent’s campaign, and to trying to improve your campaign by gaining political power. There’s lots of fun to be had with Shasn.

One of my favorite things in Shasn were the Ideology Cards. These not only gave players the chance to gain Ideology powers or resources, but also sparked table talk about the card’s question. Some questions are no-brainers and the answers will not surprise you, but others did spark some discussion. I also liked how you got two sets of campaign Ideology Cards, a US and India one, as both had their own surprises.

The Ideology Cards and your ability to trade resources does give Shasn a social aspect that I didn’t expect but really enjoyed. I don’t typically enjoy games that are played in silence with players pushing cubes around a board. If that’s what you love then Shasn is likely not for you. I really enjoy table talk and especially when it’s centered on the game itself.

As an area control game, Shasn has you immediately engaged as a player from when the first voter pegs that hit the board. You’re constantly thinking of your current and future moves and where and how you can gain majorities. Now, I will caution players that Shasn, like some area control games, does have a “take that” and a “foil the leader” feel, especially with regards to Gerrymandering and Conspiracy cards.

We typically do not discuss game components with previews because these usually are in a rough prototype state, but Shasn breaks the mold. The production values are off the charts from the artwork, game board, and cards would rival any retail game if not surpass it. And Shasn is a very polished game mechanically, you can see the work and playtesting that went into this game.

If you are a fan of area control games then Shasn is absolutely worth checking out. From the start, you’re immersed in the election campaign theme and engaged by what you and other players are doing. Shasn does have a “take that” and “foil the leader” feel, but if you’re cool with these aspects then there’s still a ton of upside. The Ideology cards are great ways to spark discussion, build political power, and gain resources.

Even with this beta version, I definitely had fun with Shasn. It’s a great sign that this version had polished mechanics and that the production values were amazing. I’m excited that to see what the final Kickstarter version and stretch goals will be for Shasn.

Shasn just launched on Kickstarter, so head over to their campaign page to find out more information or to become a backer.