We review Sanctum, a dice rolling, Diablo inspired board game published by Czech Games Edition. In Sanctum, players are slaying demons, equipment loot and unlocking skills to customize their character. 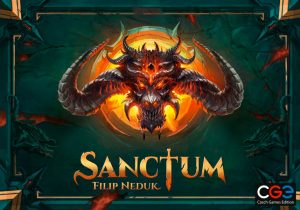 When it comes to video games, Diablo is probably one of my all-time favorites. From Diablo 1 to 3, I’ve spent more hours in this loot piñata than I can even count. While I feel like there have been a few attempts to bring this game to our tabletops, they have all been met with varying degrees of success. From the ill-fated dungeon crawler Myth, to the “just OK” card drafting game Lost Legends, a Diablo to board game translation might just be a white whale.

Or is it? Today we are going to take a look at Sanctum, a diablo inspired (from the art alone), dice rolling, loot collecting board game published by Czech Games Edition. Are you ready to hack through some demons? Let’s get to it.

In Sanctum, each player controls one of 4 characters (Huntress, Outlaw, Slayer, Dancer), each with their own unique set of demon crushing skills.

On a player’s turn they choose one of three actions: Move, Fight, or Rest.

Players will alternate taking one of these three actions until each player has reached the Sanctum and is ready to face the final boss. The final fight with the Demon Lord is one continuous battle where each player is trying to make their way through a line of Demon Lord cards. Fighting works just like the main phase of the game, but there is no resting, so players have to fight until they defeat all the Demon Lord cards, or die.

Whoever defeats the Demon Lord wins. If more than one player does (or no one does), whoever has the most health left wins.

I’m not going to lie, when I heard that Filip Neduk was designing a board game take on Diablo, I was stupid excited. He’s the designer of Adrenaline, a game that did a fantastic job of bringing the first-person shooter genre to our tabletops—which is also probably on my list of top ten board games of all time. So did he succeed? Yes… for that most part.

Let’s start with the good stuff, and there is a lot of it in Sanctum. First, as you’d expect with a game published by CGE, the production values are excellent. Sanctum has not only fantastic, diablo inspired artwork, but all the components are really high quality. There are four miniatures, one for each of the characters, and the Act boards all have great looking top-down artwork.

For the gameplay, I really liked the level up system. Each player has a unique set of skills that start with a number of gems on them. When you kill a monster, you get to move one or more gems. Move a gem off a tile and you get that skill. What’s interesting is that there are three columns of skills, and you can move gems from anywhere in that column. That forces you to decide: do you start at the bottom, unlocking more powerful skills early, but making the ones above it harder to get? Or do you start at the top, not only freeing up skills quicker but unlocking gems used to slot items? It’s an interesting mechanic that really forces players into some hard choices on how they want to customize their character. Chances are, you won’t unlock every skill during the game.

And this goes hand in hand with the loot system, which was also really well designed. Every monster slain turns into loot and each player has the standard body slots you’d expect (hands, feet, body, etc…). What’s interesting is that you will be getting way more loot than you can equip (don’t you always?). So you will have to decide which items you want to equip, which can only be changed when you rest. Do you want more dice manipulation at the expense of defense? Or maybe you want neither and would prefer an item that grants you more stamina or focus. There are tons of items in the game and they all feel awesome.

Overall, the game mechanics are simple. Move to the front of the line, take monsters, fight monsters. The combat system flows smoothly and almost feels reminiscent of Castles of Burgundy. I liked how streamlined it was and that even when it’s not your turn, downtime is minimal. The game gives you lots of ways to mitigate the randomness of the dice and prevent damage so that you never feel like a slave to luck.

But as much fun as I’m having with Sanctum, and I am enjoying it, there are a few areas that I just wish were better. First, the end game is a bit lackluster. While the main game and overall combat feels smooth and polished, the Demon Lord battle feels at odds with the rest of the game. It’s a long series of cards that will beat you down, and require a decent amount of luck to get through. To be honest, I’m not sure how the end game should have been, but this doesn’t feel like it.

My other issue with the game is that the travel mechanics feel underdeveloped. You have the gorgeous boards with some great overland artwork, but the players just march in a line along it. It feels mechanical and unthematic. I would have loved to see some branching paths, mini bosses, or spaces that did something (other than the 1 treasure space at the end of the board).

Finally, I should point out that, for the most part, Sanctum is a multiplayer solitaire. Other than taking a monster your opponent wanted, there isn’t really any way to interact with each other. You are all marching on the same journey, but separately.

At the end of the day, Sanctum is definitely a good game, but maybe not a great one. Filip Neduk definitely did some great things here, both with his unique leveling system and capturing the loot piñata feel of Diablo. I also appreciated how the characters felt creative and weren’t just your standard fantasy tropes.

That being said, I still find myself wishing for a different end game, and a more engaging travel experience. I hope CGE gives us an expansion someday for Sanctum that can improve these areas, which could transform Sanctum from a good game to a truly remarkable one. Because the core gameplay is solid and a ton of fun.

Final Score: 3.5 Stars – A game with a great theme, and it uses it well, but is held back a little by its end game.