We review Roadkill, a gruesomely-themed board game about collecting...roadkill. Published by Helvetiq, Roadkill is a set collection and take that board game with some cute, minimalist art. 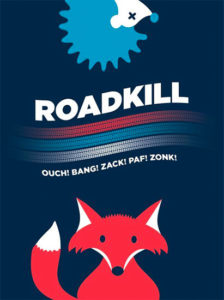 Why did the hedgehog cross the road? Actually – did it? Or did it even make it across at all? Oh dear.

Helevetiq’s Roadkill is a take that game full of backstabbing, management, and attempting to keep your own road free from ghastly animal accidents while plotting against your opponent’s poor critters.

Roadkill is a lightweight, take that, set collection game for 2-5 players. It plays best with 4-5 players.

The game is played in three rounds. Each player gets a section of road and a hand of six cards. Each board has space for 4 cards on either lane. On a turn, a player will play a card to either their own board or an opponent’s and then draw a card. These cards can consist of:

The round ends when all eight spaces of any player’s board are covered or the draw pile runs out. Players then count the number of deceased animals and truck cards on their board and left in their hand. The player with the lowest number blind draws scoring tokens (one for each player) from a face down pile of tokens numbered from 1 to 4 and chooses which one they’d like, passing them to the next lowest player and so forth. At the end of three round, players add up the value of the tokens – highest score wins.

I don’t like the theme. I need to get that out there. Helevetiq makes some hella-cute games but the theme is depressing and sad. The game play/mechanic isn’t bound to or enhanced by the theme, so it could easily have been sinking toy boats or swiping pirate booty.

OK, now that’s clear – at its core, this is a fun game. There’s a lot of revenge-y take that coupled with some board management. The larger the group, the more fun it is to see how just a few turns can change the board landscapes dramatically. No one is safe. Additionally, as scoring is based not only on your player board but the actual contents of your hand, there’s zero room for playing nice.

The rulebook can use some work. It suffers from some translation syndrome (it’s in English, Dutch, German, Italian, Spanish, and French.) There’s also a couple mechanics that aren’t clear (we played the clearing cards like instants that were thrown away after play as it seemed to make the most sense, but the rulebook clearly shows a veterinarian on a road space.

I do like the art style. The Swiss minimalist critters are adorable, and it’s a great style for visibility.

I also like the scoring style. Since the score tokens are drawn blind it’s impossible to know who might really be ahead. Did everyone get a 1? Is one person holding all 4s? The nature of scoring keeps everyone invested in doing their best (or their worst to someone else) right up til the very end.

Roadkill has a cute art style pasted over a not-so-cute theme. Fierce competitive play is not just encouraged, its the only way to win. The scoring method in Roadkill adds an interesting twist that will keep you guess the real winner until the very end.

Final Score: 3 Stars – Cute game, not so cute theme. Minimalist art in a game where being ruthless is at a maximum. Rulebook could use some clarification. 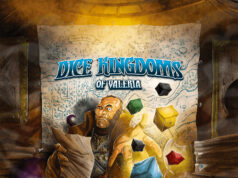