Chances are if you are reading this board game review, then you have heard of the classic game Risk. The “game of world domination” has been out since 1957. The is one of the classic strategy games that most gamers encounter early in their board game life. It has even been featured on the formerly popular show, Seinfeld.
Since it’s introduction, Risk has spawned a few variant titles, such as Risk Godstorm

. For this board game review, I’m going to be talking about the newest entry (and most unique) to the risk family, Risk Legacy 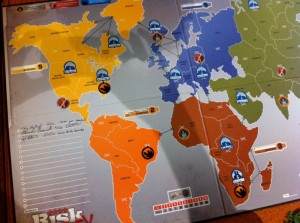 First, to get the basics out of the way. Risk is a fairly simple game. You start with some troops on the board, which is a map of the world broken out into different territories. Each turn, you are adding troops based on how many territories you controls. Then, you spend your turn attacking other player’s territories in hopes of expanding your control. Combat is handled by a simple dice rolling mechanic. That’s risk in a nutshell. In my opinion, it’s the easiest and most basic of strategy games.
So what is Risk: Legacy. Well, I’d have to say it’s unlink any game I’ve ever played. When you play this game, you are truly making it your own. You will be doing things like opening secret packets through out the game, tearing up cards (indeed, you are destroying parts of your game), putting stickers on and writing on the game board.
The concept is so unique to board games, that I had to try this out for myself. I must say, it was a bit of a struggle to actually tear up a card for my board game (I usually keep them in pristine condition). But after 4 games of risk legacy, I was hooked! 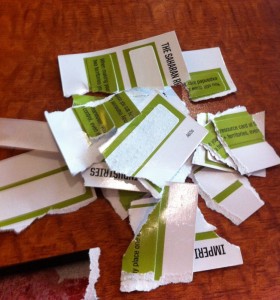 I described a bit earlier how to play “vanilla risk”. And for the most part, the game is the same. Combat works the same, so does territory control and movement. However, there are some important differences in Risk: Legacy
When you start your first game, each player chooses one of five different factions. You get to choose a power for your faction (they are all different). After you make your choice, you stick it on to the faction card (it’s a sticker). The other power? You tear that up and throw it away. never to be used.
Second, the game is not played until someone dominates the whole world. Well it can be, but it rarely reaches that level. The easiest way to win is to acquire 4 starts. You get starts by either controlling other players starting HQs or turning in territory cards. You also get a start if you’ve never won the game. That is actually tracked by a spot on the game board. If you win a game, you get to sign the board and gloat over your opponents.
And that plays into the heart of Risk: Legacy. The game is truly meant to be played by the same 5 players throughout the 15 game campaign. You really feel like you are making it your game. 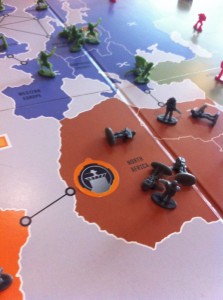 At the end of the game is where a lot of customization happens. The winner of the game gets a whole slew of options to choose from to customize the game. Options range from founding a city to renaming a continent (all which provide bonus to that player only). Even the losers get to either found a minor city or improve a territory. Every game you will be doing some customization to the game board.
Changes are made throughout the game too. Players sometimes get “scar cards” that they can use in game to their benefit. However, scars are permanent. If you decide to play that ammo shortage card in Brazil, then Brazil will haven an ammo shortage every other time you play that game. Beware!
And then there are the secret packets. When you open the game box, you are immediately created with 4, sealed white packets. Each packet has specific instructions on when yo 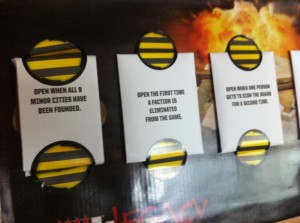 u can open them. I’ll keep this review spoiler free and not tell you what are in them. But suffice to say, opening one of those packets is nothing short of intoxicating. Much like opening a booster pack of Magic: The Gathering cards, you are super exited to see what’s in there. Every time we got to open one of those packets, we wanted to play another game just to use what was in it. 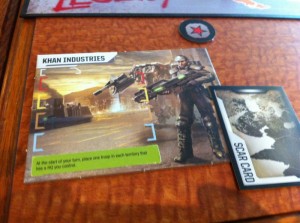 I can honestly say, this is the first time in my life I’ve played 4 games of risk, back-to-back, in about 2 hours. Adding in the 4 start victory condition instead of requiring world domination helps scale back the game time immensely. It also adds in new tactics. Risk players will be familiar with the “turtle” strategy of holing up in Australia while the rest of the world beats itself up. In Risk: Legacy, it pays to take risks. (no pun intended).
For our first game, I drew the Kahn Industries faction. I chose my starting power, and tore up the other one (somewhen begrudgingly). We each got a scar power and they came out on the board quickly. I started in South America (Brazil) and quickly engaged in a war with Africa.
After about 20 minutes, I had destroyed Africa and marched into the HQ of the faction based in Europe and secured the first victory of the game. 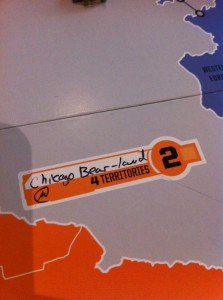 I signed the board in the #1 spot and took a poke at my buddy Jeff. As the winner, I also got to choose a major prize. I made the choice to rename a continent. When you do that, you get 1 bonus troop every time you control it. Since I like controlling South America, I renamed it Chicago Bear-land.
The game went so quick and we all enjoyed it we decided to play a second, and third and fourth! Throughout the corse of the games, we opened 3 of the secret packets and founded quite a few cities.
I also won the 4th game which let me name/found a major city. Thus, the City of Greyhawk was founded in Brazil. Now I have a lot of incentive to control South America, er I mean Chicago Bear-Land.

If you can’t tell already, I loved Risk: Legacy. And to be honest, I was not a very big risk fan in the past. The game felt so simplistic, that if I was going to be playing a war game, i’d rather it be something like Axis and Allies. Something with more meat to it.
However, the customization of the game in Risk Legacy

is nothing short of brilliant. I never thought it’d be so much fun to mark up a board game. The hidden element of the sealed packets adds a ton of mystery to the game that keeps you coming back for more. The 5 of us who bought this game are all invested in it now. The bad part is I have to wait another year before I can play it again. We only see each other once a year at GenCon so Risk: Legacy will have to stay on the shelf until then.
But if you are looking for a fun game, with easy to learn rules, that will keep you coming back for more, get Risk Legacy

. You won’t be sorry. Do yourself a favor and find 4 other players to play with you consistently. This game is really meant to be shared with the same people. And avoid the spoilers if you can. It’s worth it.

Final Score: 4.5 Stars – A new twist on Risk that makes the game yours. The secret packets will keep you coming back for more.

Misses:
• Not for those that have to keep their games in mint condition.
• Once the games packets are all open and the full campaign played, replay diminishes.