Board Game Review by: :
Jacob Daneman

In a guest post today, Jacob reviews Res Arcana, an engine building and deck building game published by Sand Castle Games. In Res Arcana, you are trying to build the most efficient engine with a limited pool of cards. 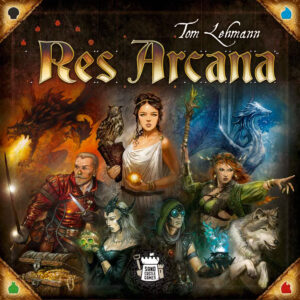 What the heck is Res? Arcana, sure. We’re all nerds, we know that means magic. But Res? Let’s figure this out. In Spanish, res means “beef.” Beef Magic? No, that’s probably not it. Res could also be derived from the Latin, meaning “thing.” Thing Arcana. Perhaps, but still probably not. So, what the hell does the title of this game imply?

Let’s look at the designer, Tom Lehmann, and his body of work. His most celebrated game is Race for the Galaxy… wait. There’s that word again. Res. Race. Race Arcana. Magic Race. Well, hot damn, I think we’ve figured this thing out. Now that we have that sorted out, Magic Race… er… Res Arcana is a fantasy-themed card-drafting (emphasis my own, more on that shortly) and engine-building game for 2-4 players that takes about 45 minutes to play, and plays well at all player counts. But make no mistake; that engine you’re building fuels a fast-paced sprint to be the first to score 10 points.

Players take the role of asymmetrically powered mages and, after drafting (hmm, there’s that emphasis again) a deck of 8 Artifact cards, must use those cards, and little else to build an engine that will crank out and convert resources, acquire point-scoring Monuments and supercharged Places of Power, which will, in turn, be used to crank out points, until one player ends the round with 10 or more points.

Players begin each round by collecting an income of resources based on what their tableau dictates. They then proceed with take very quick turns in a clockwise fashion, starting with the player with the First Player Token, and either decide to play a card from their slender hand—paying the required resources to add them to their tableau, activating an action on an already-played card, or spending resources to purchase a Place of Power or Monument. These latter two items are powerful tools that either give the player points or offer the player a straightforward mechanism to convert resources into points.

After a player has run out of available actions, they must pass, and in doing so return their Magic Item to the center of the table and acquire a new one. These Magic Items are minor asymmetrical powers that a player may use once per round.

Points are primarily accumulated via the Places of Power, and though there are other ways to score points, namely via the Monument cards and several Artifact cards such as Dragons and certain Beasts, ultimately players must create an efficient points engine if they hope to win.

As you open the box and acclimate yourself with the components, there’s a comfortable feeling of familiarity that may wash over a somewhat experienced gamer. The wooden resource tokens are tactile and friendly in appearance, immediately telling you something about the game (“I need to get me some of these, and then I’ll be spending ‘em on stuff!”). The card costs are in that well-known upper left-hand corner, so you immediately know that you are going to be paying for the cards with those little wooden guys you just got excited about. It’s inviting and simple, like a hobo hieroglyph telling you that “here there be tasty vittles and a warm barn to sleep in.”

The absolute genius of this game (spoiler alert, it’s very good) is precisely its simplicity, and how it offers an extremely rewarding and quick gaming experience with very little fuss and fiddliness. Actions are blindingly quick. This is decidedly not a “take your turn and then look at your phone” game; it will be your turn again before you’ve finished considering whether your last move was a mistake or not. If you’ve built a solid engine, your turns often play themselves. And again, your deck has EIGHT CARDS, and will never have more added to it. You know exactly what cards you have in your deck; you simply don’t know when they will appear.

I suppose now would be a good time to mention the card-drafting. While drafting your deck of 8 Artifact cards is considered a variant, I consider this absolutely fundamental to the game and it really should not be played without it. This is your chance to actually build the foundation of your engine, and perhaps deny your opponents certain cards. Any time I come across someone who doesn’t adore this game, I always ask, “do you play with card drafting?” and without fail, the answer is no. This is akin to being a woodworker preparing to build a fine cabinet, and then flippantly saying, “yeah, I dunno, just give me whatever wood you’ve got.” It is a misapprehension of what the game is meant to be, and not drafting cedes 20% of your game’s fate to chance. So in a sense, it is a deck-builder, in that you truly must build your deck with purpose and care, but this is done in the pre-game draft and not “in medias res.”

All this plays into the game’s elegant simplicity. The base game has 40 Artifact cards. This is a game that rewards repeat plays. Familiarity breeds strategy and the limited number of cards sow that familiarity. You begin to realize how powerful certain cards are when paired with others. Many of us became accustomed to this very feeling while obsessively playing Lehmann’s other masterpiece, Race for the Galaxy. It’s a testament to his balanced design, which reveals itself to true believers who have put in the time. Even the simple act of passing can become a game of chicken or nuclear brinkmanship to the attentive player. At some point in the round, you must pass, and now have a deceptively difficult decision to make. If there’s a Magic Item you know may benefit you, or perhaps may greatly benefit an opponent, you may find yourself making the decision to pass early—possibly leaving actions unplayed—to claim it, and possibly even claim the First Player Token, netting you a temporary point in the process.

If there’s one thing to gripe about, it’s how the game deals with player conflict. Some of the Artifacts, primarily the dragons, offer players a tiny taste of “take that.” Certain cards offer players a way to attack other players, and if undefended, may lead to them losing some resources. My problem with this is not conceptual; I’m a fan of player conflict and often feel there’s not enough of it in modern Euro games. It simply felt a bit tacked on and inessential to the game’s raison d’etre. Sure, it could be used at an opportune time to derail your opponents’ efforts for a round, but attacks are usually easily defended against, and are more a nuisance than a true threat. This element could either have been eliminated or developed further, but in its current state, felt a little betwixt and between.

Finally, it’s worth mentioning how wonderfully this game is presented and packaged. The art is excellent, the iconography clear. Everything fits neatly and tightly into the box’s insert. There’s a tray included in the game for all the resources and pulls out of the box and can be set in the center of the table. I mean hell, there are spots in the base game box for the Lux et Tenebrae expansion! I’m of the mind that, nowadays, there is no excuse for a sloppy insert. The days when we used to toss shoddy inserts for new games as soon as we bagged up the components is over. With the rise of producers like Game Trayz, and the steady rise in the retail cost of games—and gamers’ general willingness to pay those higher prices—a well-executed insert should be an integral part of the production design process, and Res Arcana helped blaze that trail in 2019.

This is one of the best games to be released in the past 2 years, full stop. If a game’s worth is determined by how many times it leaves the shelf and hits the table, Res Arcana is worth its weight in gold. From its duration to its versatility at any player count, its presentation to its elegant simplicity, Res Arcana delivers a gaming experience that can coax in the gateway gamer as easily as it can tantalize a veteran of the hobby. Its one minor weakness—combat—is not enough to derail its magic.

Final Score: 5 Stars – A remarkably elegant and simple game to learn, Res Arcana reveals itself to gamers through repeated plays, and delivers a rewarding game experience for all levels of player.

Hits:
• Simple design belies its many rewarding decisions
• Gorgeous art
• Insert is one of the best

Misses:
• Attacks feels a bit tacked on and unsatisfying
• Drafting should be a mandatory rather than a variant

About the Author: Jacob Daneman has been fully immersed in the board game hobby since the aughts, a passion initially sparked one fateful day in 1990 when his brother bought young 8-year-old Jacob a fresh copy of HeroQuest. Since those early days, Jacob’s gaming tastes have shifted as new doors have been opened for him. Whether it was falling in love with early fantasy adventure games like Talisman or discovering the meticulous strategy and analysis of Euros via games like Agricola and Castles of Burgundy, or even the reawakening of his love for more profound player interaction via games like Twilight Imperium, Jacob’s palate is broad, his aim is true, and his dice rolls are nat 20s.