We review Reef, an abstract strategy board game published by Next Move Games. In Reef, players are trying to earn the most victory points by building up a 3D reef over the course of the game. 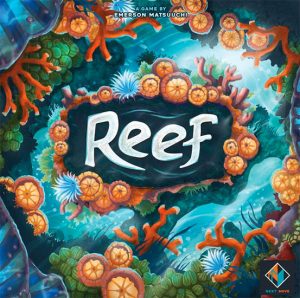 Abstract strategy games seem to be on the rise in our hobby. Where they were once ignored due to their themeless nature and usually bland components, games like Azul, Santorini, and Onitama have reinvigorated the genre.

Today, we are going to slap on our SCUBA gear as we head under the sea with Reef. This abstract strategy game published by Next Move Games will have players earning victory points as they build their underwater reef.

Reef is simple to learn and get to the table. On a players turn, they have two choices for an action. They can either draw a card from the center display or play a card from their hand.

The game ends when one of the four reef colors runs out. In this case, the players total up their victory points and the player with the most is the winner.

Reef makes an absolutely fantastic gateway game. The rules are simple enough to explain in a minute or two, and the 3D pieces are fun to play with. It also brings a lot of joy to watch your reef build up in 3D over the course of the game. This is something I’m always a fan of in building games. Now I will say that I wish that the plastic pieces were somewhat more “reeflike”, they somewhat remind me of kids building blocks with their generic shape and shiny plastic nature.

For the gamer at heart, the central draw of Reef will be in its card optimization. Game designer Emerson Matsuuchi cleverly created the cards to always have the pieces it gives you on the top half never help with the scoring on the bottom half. That means that you’ll need to plan ahead if you want to fully optimize your actions.

You have a hand limit of four cards, but a smart player will draft cards that will work in tandem. So I want to play card A, which gives me two yellow pieces, that I can use next turn to play card B to score points, and the pieces from card B help me score points for card C and so on. Rarely do you want to waste a turn just gaining pieces from a card unless it sets you up for a big score later.

When it comes to player scaling, I’m a bit torn as to which player count I like best. Since Reef is pretty much a multiplayer solitaire game, there isn’t much you can do to hinder your opponents. The best you can do is draft a card that would really help out an opponent so they don’t score off it, but that’s usually a suboptimal move. I’ve found at the two player count, the game is much more strategic, as the cards in the drafting row don’t move very often. While at 4 players, the cards churn much more rapidly, so the game becomes more tactical as what you have to choose from will change often. However, then you have to deal with the increased downtime between turns.

Reef was another solid offering from Next Move Games. It has quickly worked its way into the rotation for gateway games I can play with family and friends. While I do wish that the pieces in Reef were a little less toy-like and there was more player interaction, those are both just small complaints in an otherwise solid game.

More and more I’m becoming a fan of the abstract strategy game genre and Reef is a great addition to that lineup. It does well to scratch that itch of a game that we can jump right into and start playing, and also can be as thinky as we want to make it.

Final Score: 3.5 Stars – A solid abstract strategy game that makes a great choice for families and those looking for something on the lighter side of the spectrum.

Hits:
• Easy to jump in and start playing
• Card optimization was a great design choice
• Plays well at all player counts