We review Azul, a tile laying, abstract strategy game published by Plan B Games. In Azul, players are collecting tiles and trying to fill rows on their player boards. Azul has some amazing components and we tell you if the game play backs that up. 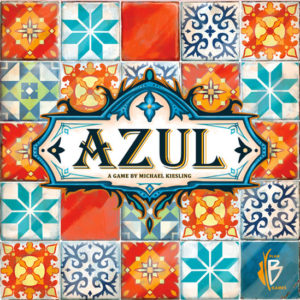 Azul is a tile drafting game where players attempt to build the most aesthetically pleasing pattern on the walls of the royal palace. The game is rooted in the historical use of azulejos, tin-glazed ceramic tiles, in Portugal during the reign of King Manuel I.

While the setting is historical, the theme is only carried through so far as the beautiful components. Azul plays like a very puzzley abstract game for 2-4 players and plays in about 30 minutes.

Azul is played over 5 or more rounds. Players will alternate turns taking tiles from one of the available factories or from the center pile. The number of factories scales with the number of players and each factory is populated with four azulejos tiles at the beginning of the round.

You place the tiles you have selected on one of the rows of your player board. Of the 5 available rows, the top row only requires one tile, the next requires 2, and so on. Your goal is to complete filling in that row with the required number of tiles before the end of the round.

When the round ends, any rows you have completely filled will be scored. If you have a partially filled row, it will stay partially filled until the next round. You have to complete the row with all tiles of the same color to score it. The tile will score points for every adjacent tile already placed in the same row or column. Any tiles you take but can’t play will lose points. Also, once you score a particular color in a row you can never put that color in that row again.

The game ends at the end of a round where at least one player has completed at least one row on the right side of their board. Players score bonus points for completed columns and rows.

The first thing you’ll notice about Azul is how beautiful it is on the table. The tiles aren’t huge, but are wonderfully shiny and really do end up looking a bit like a work of art. The bag that is used to mix and distribute the tiles is huge and well made. It a small thing, but I even appreciate how they placed the Plan B logo on the box in a way that doesn’t detract from the great design.

As far as the game is concerned, the mechanisms are pretty simple. You are simply drafting tiles trying to take what you need before your opponents snatch them up. The most interesting aspect is how the unchosen tiles from a factory are added to the center pile. If you need a whole lot of black tiles, for instance, you can try to push a lot of them in the middle while taking other stuff and hope to grab many of them in one action.

Of course, that plan can backfire because you will simultaneously make it more enticing for your opponents to grab those tiles out of the middle as well. It sounds a little bit like a press your luck element, but sometimes feels more like a stand-off where you are trying to wait for the right moment to finally push the tiles into the middle.

With the full complement of four players, I found myself mostly working on my own wall without worrying too much about my opponents. Occasionally I would glance at what they are doing, but in the span of three other players going, the landscape changes quite a bit. With two players it’s more tense as you have to be somewhat proactive to block your opponent, especially in the later game. You don’t want to be stuck grabbing a whole handful of tiles you can’t use and losing a bunch of points.

Azul is a bit tough to wrap your head around at the beginning. The mechanisms are simple, but exactly how the rows fill up and how the tiles score has been difficult to teach at times. There isn’t a lot of other games to compare it to, which is good. But without some frame of reference it can be tough on new players. And to that end, if you are playing with a mix of new and experienced players, the gap in scores can be dramatic. One of my games ended with a 75-29 score. I don’t think this is necessarily a negative, as the game rewards familiarity and repeated plays.

Azul is the perfect game to open up a game night. It is a short game, but yet has a lot of decision-making that requires you to get your brain firing from the beginning. There is a lot of player interaction, but it is never mean. Even in a two player game where you may make a decision purely based on how good the alternative would be for your opponent, it isn’t take-that so much as self-preservation.

If you are a fan of abstract games or puzzles even, Azul is worth checking out. Not only does it look fantastic, but there is a great game and a lot of depth to explore.

Final Score: 4 Stars – An abstract puzzle game that I’m still excited to try to solve after many plays.

Misses:
• A little convoluted to teach
• New players are going to get trounced