Board Game Review by: :
Mindful Phill 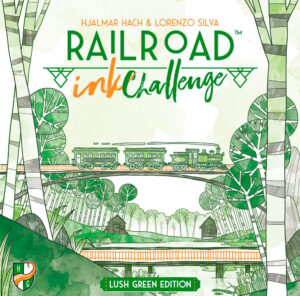 Railroad Ink Challenge delivers a welcome upgrade to Railroad Ink by adding “Challenges”, territories, and updated dice. Compared to its predecessor, it raises the bar without a doubt. So, are you ready and up to this new “Challenge”?

Railroad Ink Challenge is a low-complex quick Roll & Write game where players compete to build their networks of railways and highways. Create routes connecting the exits on your board. Plan your network carefully, and connect railways, highways, and stations to collect points. However, be careful. Any open connections will be penalized, so plan ahead!

In Railroad Ink Challenge, one to four players compete to build their networks of railways and highways. You can play up to eight players if you have both game editions. Each match is fast and can take from fifteen to thirty minutes.

Please note that this review is based on the core game, without variants and expansions that differ between the “Lush Green Edition” and the “Shining Yellow Edition”.

Each round, you’ll roll the dice to build your network and connect as many exits as possible. Collect points by expanding your network. Additionally, you can score bonus points for your longest highway and railway, for building into your map’s central spaces, and for completing optional, time-dependent challenges.

Unique structures can also be connected to your network to trigger their special effects, such as duplicating routes, unlocking powerful special routes, and more. Leaving open connections will cost you points at the end of the game, which is triggered at the end of the seventh round. Players compute their score, and the player with the most points wins.

The game Designed Uncertainty is determined by the dice roll, and it is always well-balanced because all players share the same pool of dice to build their own network. Players fill their boards simultaneously, so there is almost zero downtime during the game.

There isn’t much player interaction during the game, as each player is highly focused on creating their own network. However, Performance Contingency is a high factor in the game because, as players have access to the same pool of dice, the game’s outcome directly results from players’ tactical choices.

Fictional Involvement is also a high point in this game. All components, dice, player boards, and the compelling overall artwork significantly contribute to the theme of building a network of railroads and highways.

Railroad Ink Challenge is one of the best filler games I’ve ever played, featuring zero setup time, downtime, and adjustable complexity. Newbies will quickly learn how to play this game, and you can make it easier or harder, depending on who you play with. There are many ways to score points and several expansions and variants available in the game, so replay value is undoubtedly there. The game can be played again and again by wiping the boards. And that is exactly my “Railroad Plan”: to play this game as much as possible because I enjoy it so much.

Hits:
• Portable, quick, fast-paced, and simply superb.
• It is highly replayable, with many ways to play, several expansions, and variants.
• Engaging, compelling, and addictive.

Misses:
• You will definitely want to buy both editions, especially if you want to play with more than four players.
• It can be expensive if you want to acquire all the game expansions.
• There isn’t much player interaction during the game.

This article was originally published in Roll & Mind.