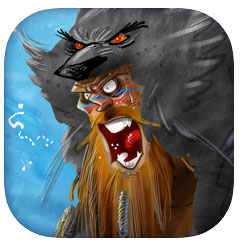 Many folks have taken an interest in board games as an avenue to disconnect from their screens and to reconnect with friends and family. But in the last few years, analog board games have started to take on a digital interface. Some are direct translations to the digital medium, while others have made adjustments for this new interface. However, you feel about trading chits for sprites, games will continue to find their way into our lives, however we choose to engage with them. I came into Raiders of the North Sea having no experience with the analog compatriot. Did this Viking-themed worker placement plunder my interest or was it destroyed in Ragnarök?

Raiders of the North Sea was developed by Shem Phillips and distributed by Renegade Games. The digital game was developed by Dire Wolf Digital. This reviewer used the Android platform, but the game can also be found on iOS, Steam, and Nintendo Switch.

Raiders of the North Sea is a worker placement game (nerd speak: place your game piece in a location to get or do something). On a turn, players will place their Nordic pillager on an open space, gaining resources, hiring crew for their ships, or pillaging locations. Then, players pick up an already placed marauder to take that location’s action.

As players pillage locations with more possible victory points, they’ll need bigger, stronger crews and more resources. Once one of the end game conditions trigger, all players will take one final turn. Points earned from plundering, gaining resources, and sending your crew to Valhalla (yep, even your crewmates dying can give you VP). Whoever has the most is the winner.

As someone with no knowledge of the game beforehand, I was curious how my learning experience would be without a rulebook being handy. The app includes tutorials that teach the game in a digestible and logical way. It introduces the game concepts and holds players’ hands in a learning session against an AI. It offers direction through text and visual cues and introduces additional game concepts as the game progresses. I find this to be one of the best ways to learn a game and they did a fantastic job here. In the course of learning and playing the game, you’re likely to make mistakes. But here, if you realize it before you have committed to an action, they give you an undo button, which I find to be a nice touch as well.

I have played a few worker placement games, such as Viticulture, and really enjoy this game mechanic. Raiders of the North Sea offers a great game experience. It presents the simplicity of action choices and different strategies for your Viking victory, which makes it accessible and satisfying. I think it’s a great introduction to the worker placement mechanic and is especially recommended for those still learning what their particular game tastes are.

Raiders of the North Sea offers a mixture of routes to play. You can play against up to three other AIs with three difficulty settings. I found a two-player AI game on easy to be a satisfactory route to really explore and find a strategy beyond the tutorial. For most skilled gamers, this level might only get one play, as it’s easy to blow out the competition. I found the best experience was with three players on medium. It was challenging enough to give you a chance to stay in the game without a runaway winner which I experienced sometimes at two. This was my most preferred means of playing.

The game also offers a pass and play with friends mode, which is great for when you’re traveling and don’t want to lug another item along or for a long car ride. There’s also a 5-level campaign that changes up the game a little bit, progressively making different cards available that are normally available at the outset of a normal game. It also changes up scoring prerogatives to get players to focus on different ways to score points. This mode is fine. If this isn’t the first route you take to playing the game, you might only play two or three levels and leave the rest unplayed.

Lastly, there is an online mode, offering you the possibility to play with others remotely. The few times I checked for available games, at most, there were usually only one or two available with either one person waiting, or the game was locked. I never bothered to host a game and I personally don’t have the patience to see if someone would join, opting instead to play an AI game. But I was happy to learn that regardless of your preferred game platform, online games are cross-platform compatible which is a plus for potential remote players and those interested in this feature.

Let’s talk briefly about some digital aspects to the game. First off, I didn’t run into any bugs. I had to close the app once and I’m not certain if that was due to the game or something else on my phone. Either way, I was able to jump right back into my session because the app does a great job of saving your place after each turn. Speaking of continuing games, there’s an option on the home screen called active games. This only pertains to remote games and not the local ones in progress. It’s a little confusing that these aren’t listed here, but I assume this could change with later updates.

Raiders of the North Sea is fantastic and my experience with the app was equally so. The streamlined tutorial will get any player familiar with the rules and playing in no time. Players have plenty of playing possibilities for their preferences. The visual and auditory touches offer an enhanced experience to an already great game. I don’t keep or play many games on my phone. I certainly don’t buy many games for my phone either. But this is one that will find itself relevant and entertaining me for some time. It’s well worth it.