Board Game Review by::
Mindful Phill

We review Racing Hedghogs, a family game that involves prediction skills, being astute, clever, and a touch of deception. Are you confident you have what it takes to outwit your opponents and win this competition? 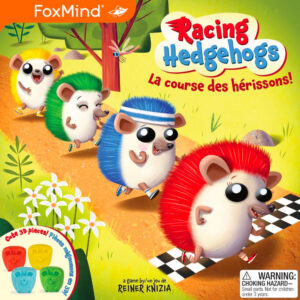 Looking for a family game that involves prediction skills, being astute, clever, and a touch of deception to come out on top? Are you confident you have what it takes to outwit your opponents and win this competition? Bring your family and friends together to have a fun-filled time playing Racing Hedgehogs! There is no doubt that you will have a blast playing this game.

Racing Hedgehogs carries the signature of the renowned designer Reiner Knizia, which means that it is worth checking out this game. With more than 700 games and books released and over 13 million sold worldwide, including numerous global licenses such as Disney, LEGO, Playmobil, Lord of the Rings, and many others, Reiner Knizia is one of the world’s most prolific and successful game designers ever. Reiner Knizia is the winner of dozens of the most important game awards, including many Spiel des Jahres and Kinderspiel des Jahres.

Racing Hedgehogs is themed as a racing game, yet, it is a unique strategy and deception game for three to five players, lasting from five to fifteen minutes per player.

During setup, hedgehogs are placed at the beginning of the race track, and players receive a number of cards depicting four colored hedgehogs or a multicolored “joker” hedgehog.

Each player, during their turn, plays a card from their hand. The cards depict which hedgehog and how many steps to move (as illustrated on the top of the card). Use the “Joker” to choose any hedgehog to play. The race ends when a hedgehog reaches the end of the track, rewarding the player with three extra points. Points for the round are calculated based on each hedgehog’s color and placement on the race track. Each track space has a value that starts from minus one and goes up to three at the last space.

For each colored hedgehog in your hand, count points according to its placement (and value) on the track. The “Joker” card counts as zero points. Race track points can be zero or negative, but a player cannot have less than zero points.

You play as many races as players in the game, and the first player moves clockwise after each race. The player with the most points at the end of the game is the winner!

While this is a “race game”, you are not playing one specific hedgehog, and it is not the game’s goal to get a particular hedgehog to cross the end line first. The game’s objective is to score points on different hedgehogs in your hand at the end of each race based on the hedgehogs’ final placement on the race track.

To win this game, you’ll need to use your prediction skills to determine which cards your opponents will likely play. Players must use their cards strategically to move their hedgehogs along the track as quickly as possible. Observe the other players carefully to infer their intentions. By tracking what everyone else is playing, you can better predict which hedgehogs will move and how far they’ll go. This information will come in handy when it’s your turn to play a card.

You also need to be cunning, use other players’ actions to your advantage, and keep the right cards in your hand to calculate a higher score at the end of a round. Another important tip is to not be afraid to take risks. If you think another player is about to win, don’t be afraid to play competitively to mess up with their plans. Sometimes the best way to win is by playing a card that might not seem like the best option. You can choose cards that play in your favor but against others. Or you can push a hedgehog to cross the end line early, penalizing low-value hedgehogs you believe your opponents have on their hands. There isn’t one winning strategy, and you must adapt yours during gameplay. With a good plan and some luck, you can always turn the odds in your favor.

Stochastic contingency (randomness) plays a very light role in the game’s designed uncertainty. It is associated with the set of cards drawn at the beginning of a match, which is usually well-balanced. High player agency means players can significantly change the game’s progression at every turn minimizing the repercussions of luck and maximizing the impact of playing strategically.

Social contingency is the critical uncertainty factor designed in the game. It is difficult to predict how other players will play and whether their actions will work in your favor or against your strategy. Player interaction results from social contingency and gameplay’s predictive and cunning aspects. It is crucial to the progress and outcomes of the game.

Regarding game complexity, this is an easy and quick-to-learn, fast-paced, simple game but requires a good level of strategy. The rules are so straightforward that they are summarised in three short pages with little text but plenty of helpful illustrations. It has a simple and quick setup, which is essentially shuffling and dealing cards. However, while it is designed to have short downtime, that depends significantly on each player. A game can easily take longer than the advertised thirty minutes.

The game’s replay value is medium and relies on how much the players enjoy playing the game. Even though it is not a short game, it is still a great filler game. It is also an excellent gateway game, especially to introduce kids from six years up to the board game hobby. On the downside, there is a lack of variability between game sessions: the race track (effectively, the board) is always the same; the game objective is identical to all players; and while cards are dealt randomly, they tend to be well balanced among players and turns (which is actually a positive aspect of the game); On the plus side there are various strategic ways of approaching the game.

Racing Hedgehogs is a highly recommended family game you can play with your young kids. Still, it appeals to people of all ages, and I find it highly entertaining and have a great time playing with other adults. It provides a gratifying experience, being simple and easy to learn & play while being very tactical at the same time.

So, prepare for a surprising hedgehog race and bring this game to your table. Remember to pay attention to the other players’ cards, take risks when necessary, and think carefully about your moves. You will cross that finish line in no time and bet on scoring highly to win the competition.

Final Score: 4 Stars – Racing Hedgehogs is an excellent example of uniqueness in game design from Reiner Knizia’s games. Game mechanisms feel special and are not just a rinse and repeat of traditional game mechanisms.

Misses:
• Limited variability can reduce replayability.
• Playing strategically is essential and may not be easy to learn for very young kids.

This article was originally posted at Roll & Mind.