We review Quetzal, a worker placement and bidding game published by Gigamic Games. In Quetzal, players are trying to earn the most points by recovering lost treasure from an ancient civilization. 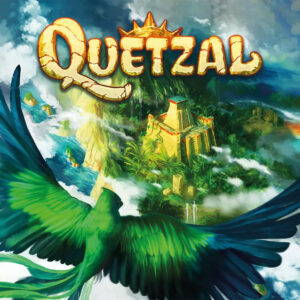 It’s finally happened! At last, we have enough funding to construct a team of explorers and travel to Quetzal, the city of sacred birds!
Maybe.

The place we’re going to isn’t ever really named and it’s unclear if “Quetzal” is the actual name of the place or just a reference to the quetzal species of birds. Either way: we’re going, and we plan to grab a whole bunch of artifacts from temple ruins while we’re there and sell them to people at the docks.
Maybe.

Since it’s a little sketchy to be pillaging ancestral temples, we might just call that “delivering” the items. Either way: we’re going to be relocating a bunch of these items, but only after doing some gymnastic tumbles to determine our skills every morning.
Maybe, you say? No, that last one is definitely going to happen.

So, join us, Dear Readers, on an expedition to the ruins of a forgotten temple in an unnamed place in designer Alexandre Garcia’s Quetzal.

Quetzal is a worker placement game in which your workers are represented by dice which are represented by meeples that you roll. That sounds confusing. Let’s rewind a bit. At the start of every turn in Quetzal, players will roll all their meeples and their landing position will impact how they can be used for the remainder of the turn. Every meeple except for the large “character” meeple has a white and black side; the white side is tied to the archaeologist’s actions and the black side can be used for adventurer actions.

After rolling, players immediately earn one coin for meeples that land standing on their feet (good balance gets you money, I guess?), while meeples lying flat remain designated to their face-up side during the placement phase. If the meeples land in a breakdancing pose (i.e., not standing on their feet), they won’t earn a coin, but can be used as either archaeologists or adventurers in the next phase. (Like I said: workers = dice = meeples.)

Players will then put their meeples on the board to determine which actions they will take. Some spots can only hold a specific color and require you to pay coins, while others can hold several meeples and have no restrictions. The most lucrative spots on the board, however, require players to win a bidding process by putting more meeples on a spot than the amount already there. These spots not only grant you two of the game’s coveted item cards, but also a small bonus in the form of points, money, or advancement on the Discovery track, which gives players rewards the further they travel along it.

Paying for a spot at the temple location will give you the widest variety of items to choose from (so long as you get there early) and the black market space lets you discard one item card to get seven coins. There’s also a spot that lets players select an upgrade tile with either a one-time boost or a power that will last the entire game.

The main way to generate points in the game is by taking sets of these items to the ship locations. The two ship locations let players ship six items if they bid more workers there than anyone else. There’s also a similar location that simply costs two coins to visit but limits the shipment to three items.

Players can “deliver” these items in sets of up to three cards and each grouping will give you points depending on the rareness of the items (mummies give you lots of points, while random barrels not so much). Many items also carry an additional bonus with them once they are shipped. After five rounds, whoever has accumulated the most victory points is the winner.

Rolling meeples is fun at first, but it’s clearly nothing more than a gimmick. The meeples are dice. Plain and simple. There are only four positions the meeples can land on – standing, lying on one of its two sides, or vertical in some non-standing way—and these options could have all been covered by making them dice with the numbers representing how everyone landed. But this is the gimmick Quetzal settled on and it’s novel without being irritating.

In terms of the game itself, it’s clear very early on what you need to do to perform well by the end. Every turn you’ll scan the board and look at which items have popped up and allocate your meeples to collect the things you want. Deciding which workers to spend is where this game excels and grabbing one of those upgrade tiles early in the game (particularly if it’s one of the more useful ones) can really focus your strategy.

The bidding mechanism and structured spots on the board will lead to some blocking by other players, but for the most part you can always grab at least a few items that will be useful to you later in the game. Especially since you don’t have a hand limit and can stack items for a turn or two.

On the negative side, the game has no real progression from turn one to the end of turn five. You are doing the same thing and basically making the same decisions over and over. Yes, some of the powers you acquire might change the direction of your decisions but there is no escalation in terms of what you can afford from the beginning of the game to the end of the game. Each round, you are simply trying to maximize the number of points you get in that round and only one or two spots on the board help set up future turns.

The game does scale well, however, and at higher player counts there are more chances for people being outbid. But even at two players, there’s a blocking automated player added who selects items in a clear manner so that it behaves as though it were a live player. Quetzal is definitely better at higher player counts but is solid at all of them.

Despite the theme not being strongly integrated into the mechanics, the art and components of the game are good and help transport players to the game’s setting. (Obviously, the setting reminded me of Legends of the Hidden Temple, but that’s just because I’m old.)

Quetzal is something of a strange bird (pun intended). It’s simple, fun, and is the type of game that the term “family weight” seems to have been invented for. That being said, the game’s main “innovation” is that players roll their meeples every turn and that just isn’t very interesting after the first round. While there aren’t significant mechanical flaws, there’s also nothing spectacular about this design either.

And thematically? Quetzal doesn’t make any sense even beyond the wild notion that you are rolling your team of explorers at the start of every turn. For instance, certain spots around the temple require you to pay money to get a more favorable selection of items. Does this mean you’re bribing people to cut them in line? And then there’s the mechanism that requires you to hand these items off at the port, which is sort of glossed over in the rulebook. One can interpret it that players are selling these pillaged items, but I suppose you could look at it that you’re an Indiana Jones-style discoverer and these items are being shipped back to a museum. By that reading, victory points represent artifact recovery points? And what “victory” is the game even calculating? At least name the points something quetzal-ey. It’s confusing at best.

Final Score: 3.5 Stars – Quetzal is an entertaining and breezy set collection and worker placement game with a mediocre gimmick and decent production values.

Hits:
• Easy to play
• Turns are quick
• Fun as a palate-cleanser in between heavier games

Misses:
• Gameplay is repetitive
• Not much strategic depth aside from what’s obvious
• No progression in the game between rounds