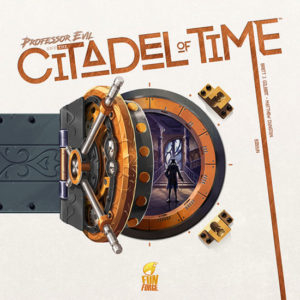 I’ll say this about games published by Funforge, they sure know how to make them pretty. Just browsing through their catalog is a virtual cornucopia of fantastic art and vibrant colors. So it’s no wonder than I had to stop and take notice of Professor Evil and the Citadel of Time when I wandered past it at Gen Con 2017.

Professor Evil and the Citadel of Time (simply Professor Evil from here on for brevity’s sake) is a cooperative heist game for 2-4 players that takes about 30 minutes to play. It plays well at all player counts.

The goal in Professor Evil is to rescue 4 treasures before the Professor can lock enough away. Each player will get to control a unique character, each of which specializes in a specific area of the game (movement, locks, etc…). Once the board is seeded with switches and treasures, you are ready to begin.

A players turn has 3 phases:

One set of dice will move the professor around the board. If he moves through an unlocked door, he locks it. If he moves into a room with an off switch, he turns it on, and if he encounters a player, they are kicked outside the Citadel. The other die will move the clock marker one or two paces. If the clock marker ever reaches a treasure marker, the professor locks that treasure away in his vault.

The game ends when the players have rescued the 4th treasure, or the Professor has secured his 4th treasure token.

One thing I really loved about Professor Evil was what a breeze it was to teach. Between that and the easy setup, you can be up and gaming in a few minutes. Since Professor Evil is a fairly light game, this helped to get it to the table somewhat often. While I wouldn’t call it a filler game, it’s definitely going to stick to the lighter end of the complexity spectrum. And when you combine that with its cooperative nature, Professor Evil ends up being a great family game in the same vein as the Forbidden Island/Desert series of games.

Setting aside the stellar visuals, one of my favorite things about Professor Evil has to be the unique player decks. While there are only 6 cards in a player deck, each character feels wholly unique. One character is really good at movement, another can easily deal with locks, and there is even one who embraces randomness in everything she does. This helps up the replay value as you are going to want to try out every character.

At its heart though, Professor Evil feels almost like a puzzle game. Sure there is randomness in the game (more on that in a second), but a lot of the game is centered around which treasures to collect and how best to make that happen. As you are racing against the Professor, a lot of the table talk will center around optimizing your actions. Player X needs to go here and flip this switch, allowing Player Y to snatch up the loot.

However, going against that puzzle-like nature of the game is how luck dependent everything is. When a treasure comes out, there is always a chance that every needed switch will already be set to off, allowing for an easy collection. Controversy, the dice determine what the professor does, and more than once I’ve seen him camp out in the same room for a few turns, essentially blocking players from even having a chance at getting a specific treasure. This can sometimes be very frustrating when you have no way to mitigate an unlucky dice roll.

The other thing to be aware of with Professor Evil is that it’s not a very hard game to win. We’ve played a handful of times already and never lost. I will say that most of the games are very close, usually 4-3 wins, so it’s not like it’s been a cakewalk. However I never really felt under the gun in the game. In some co-ops, you will feel like you are constantly treading water just to stay afloat. Professor Evil just doesn’t have that feeling. On the other hand, that’s probably one of the reasons this is a great family game. Your young ones are probably less likely to pout when they come away with a win.

Despite the glut of cooperative games coming out every year, Professor Evil and the Citadel of Time still managed to feel fresh and enjoyable. I really enjoyed the unique player decks and the great production values. I think its 30 minute play time is pretty spot on, as anything more than that and the game would probably start to feel repetitive.

If you are in the market for a lightweight or family co-op game, Professor Evil and the Citadel of Time will certainly fit the bill. Despite being another entry in a crowded genre, it still manages to stand out on its own. If you can live with some of its quirks, you can have a good time looting the Citadel.

Final Score: 3.5 Stars – A fun, puzzle-like heist game with some great production values, just be aware of the randomness in the game.

Misses:
• High degree of randomness
• Doesn’t have the tension found in many coops.