We take a look at the cooperative board game Forbidden Desert. Called as sequel to the hit game Forbidden Island, see how this new title fares against it's older brother. 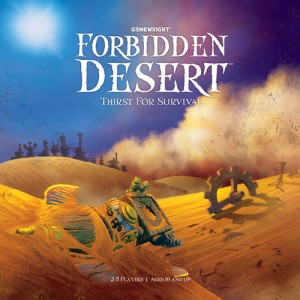 In Forbidden Desert, your plane has crashed landed in an inhospitable desert. You don’t have to be a seasoned traveler to know that’s not a good thing for your longevity. Since their plane is wrecked, the players must find a way back to civilization. Players must work together to locate the parts of an ancient flying machine before the desert claims their lives. On their turns, players will be exploring, digging, and collecting parts of the flying machine. Forbidden Desert has no less then three ways to lose, so the players must make wise decisions to escape the desert before any of those happen.

The components in Forbidden Island were pretty solid and I had no complaints. In Forbidden Desert, Gamewright has taken it up a notch. The components in Forbidden Desert are nothing short of stellar. The first thing that sticks out, besides the fantastuc insert to hold all the pieces, is the flying machine. The airship has 4 different parts that will get assembled together to take the players to safety. All the parts are high quality and it’s a a bit of a hoot to put the ship together and fly it around the board. Just try and keep your inner child contained when that happens.

Besides the flying machine, the game also comes with dual-sided cardboard tiles to serve as the variable game board. All are very well illustrated with thematic artwork. Along with those are many “X” shaped sand tile pieces. Finally, the game comes with two decks of high quality cards. I think any player will be pleasantly surprised with the quality of the components in Forbidden Desert, especially at its low price point.

Forbidden Desert takes things up a notch from the simpler game play found in Forbidden Island. After each player has chosen a character to play (each with their own unique powers), the next thing to do is setup the game’s module board in a 5×5 grid with a empty space in the center. Players then put their pawns on the crash-landing tile and are ready to play. Players will rotate taking turns in a clockwise manner until the game ends with a victory or defeat.
A players turn is broken up into 2 parts:
1. Take up to 4 actions.
2. Draw storm cards equal to the sandstorm level.

Players have 4 actions they can take on their turn:
• Move – Move to any adjacent tile
• Remove Sand – Remove one sand token from a tile
• Excavate – Flip over a tile to reveal its location
• Pickup a part – If a flying machine part has been discovered, then a player may go to that location to collect it. Unlike in Forbidden Island, where a player knows at the start where the trophies are, in Forbidden Desert players must discover the location of the machine parts. This is accomplished by finding the two marking tiles for each part. Once both are found, they will point to the tile location where the part can be found.

Drawing storms cards is the game’s way of fighting back against the players. Storm cards are all bad for the players; the only question is to what degree. The main storm cards are the wind blowing cards. This causes the eye of the storm (that empty space in the middle of the board) to shift around. As it moves, it leaves stand tiles in its wake. The other two cards are the storm increase card (which makes players draw more storm cards each turn) and the Sun Beats Down card. This causes all players to lose a water level (unless they are protected). You will learn to hate the sun beats down card.

Players will continue taking turns until they have found all parts of the flying machine and escaped or until the game has beaten them. How do they lose? Three ways:
1. Thirst: If any player runs out of water.
2. Buried: If the players run out of sand markers to place on the board.
3. Swept Away: If the storm meter reaches the top of the track.

While I liked Forbidden Island, it was almost too simple for my tastes. This did have the benefit of making it a great family game though. With that in mind, I was really looking forward to seeing what was new in Forbidden Desert. I had heard that the complexity and difficulty had been ratcheted up a notch and was hoping that was true. Well let me tell you, I was not disappointed. Forbidden Desert takes everything I liked about Forbidden Island and really builds on it.

Players now have many things that they need to do on their turn to avoid defeat. Forbidden Desert is actually a bit of a juggling act as there are so many things that will need to be taken care of at once. This will cause the player to have to make some hard choices on their turn. Do you dig out that buried tile or head for water? Do you excavate that tile in hopes that it’s a machine part or do you head for the safety of the tunnel? These kinds of choices will plague the players each turn.

Another thing I noticed in Forbidden Desert is that players will have to work together much more than in its predecessor. Because water is so rare and vital to survival, players will be huddling up on the oasis tiles. And because many of the players’ abilities work with other players, there will be a great amount of team work involved. The water carrier is vital to keep the other players hydrated. Since everyone is working together so much, this has the added benefit of keeping the game fairly interactive. All these things together make for a fantastic cooperative game.

While Forbidden Desert is really a great game, it does suffer a bit from the luck-of-the-draw factor. The draws from the storm deck can literally make or break the games for the players. We’ve had five-player games where we lost in round 1 because we had three unfortunate draws of the “Sun Beats Down” card and a player ran out of water. It was an unfortunate and unfulfilling loss that will sometimes happen in Forbidden Desert. You will be at the mercy of the draw deck and a bad shuffle will really hurt the players. While increased randomness can ruin a game, it’s not that bad in Forbidden Desert. It ups the challenge for sure and the luck is mitigated some by the useful item cards. If you manage to find the right item, it can save you from a poorly-timed draw from the storm deck.

For people that enjoyed playing Forbidden Island with their younger children, they should be advised that Forbidden Desert kicks up the complexity a notch. Players will now find equipment that they can use and will have more options for what to do on their turn. For parents of young children, this may move it a few age ranges higher than you were hoping (as I don’t have kids though, I’m probably not the best judge). However for players like me who wished for a deeper game play from Forbidden Island, you’ve gotten your wish. Forbidden Desert keeps some of the same mechanics as Forbidden Island but builds on it. I love these changes in Forbidden Desert so much that I’ll probably always prefer to play this game over its older brother.

Forbidden Desert takes much of what I really enjoy about Forbidden Island and builds onto that into a new, yet familiar game. While it doesn’t solve the cooperative quarterbacking problem, what it provides is enough things to be done on a player’s turn where there are always many paths to take. Players looking for a bit more complexity in their game should enjoy that. Speaking of complexity, I do like the addition of item cards. It adds a bit of flexibility to a player’s strategy and can help defend against an ill-timed storm card.

While Forbidden Desert isn’t the deepest of games, it is fun to play. It’s full of some hard decisions, fantastic components, and good player interaction. The randomness of the storm deck will suck a little bit of the fun out of the game, especially with some bad shuffling, but the game more than makes up for it with the overall challenge.

Combine all these factors with an absurdly cheap price point and you have a game that will make it to my tabletop again and again. For anyone that enjoys a good cooperative board game, Forbidden Desert is a must own for any players game library.

Final Score: 4 Stars – Takes what I liked about Forbidden Island and builds on it into a satisfying cooperative game with some great components.

Hits:
• Easy to learn game play
• Lots of things for a player to do on their turn
• Great components
• Low price point

Misses:
• A bad shuffle of the storm deck and prematurely end a game.
• Can suffer from “quarterbacking”