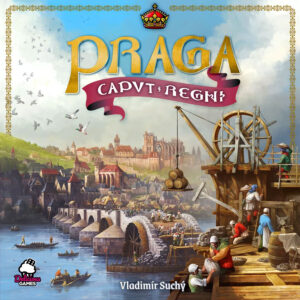 The capital of our kingdom. The hunger on our wall. The egg in our bridge.

Welcome to Praga Caput Regni, from Delicious Games designer Vladimir Suchy (Pulsar 2849, Underwater Cities) and published by Rio Grande Games. This is a crunchy action selection title filled with ever-evolving synergies that players use to expand their wealth and gain favor with King Charles IV.

The theme in Praga Caput Regni follows in the footsteps of other love letters to a designer’s homeland, like Uwe Rosenberg’s Fields of Arle and Vital Lacerda’s Lisboa. Similar in their ability to highlight a specific place in time, Praga Caput Regni adds a unique historical overlay to supplement quality mechanisms.

Players are tasked with contributing to the city construction of Prague in the 14th century. Attention must be given to several aspects of the board, including the Hunger Wall, St. Vitus Cathedral, the Charles Bridge across the Vltava River, and Charles University. The game lasts for a number of rounds, determined by the number of players, and each round starts with a seemingly simple action: choose an action tile from the circular Action Crane.

Each available Action Crane tile features two main action possibilities, though only one can be used. A corresponding bonus action based on the tile location as well as a potential cost/benefit will also impact each player’s selection. At the end of a turn, the tile is returned to the top of the crane and it is rotated clockwise, shifting all other tiles and making them cost less or worth more points.

There are six main actions. To help visualize these, each player has an Action Board that features distinct iconography. This independent board gives players the chance to upgrade actions and build fortifications.

The next three actions correspond to rows of four hex tiles seeded onto the board from separate draw piles.

Beyond these actions, the game features dual-layered player boards with two dials to track resources (gold and stone), as well as four independent tracks that record production levels for said resources, and university and technology bonuses. The tactile nature of these components adds to the construction theme, as do the two 3D components in the northwest corner of the board, the Hunger Wall and the Cathedral. These board locations allow players to move further along the respective areas for, you guessed it, even more bonuses and end game scoring opportunities.

True to theme, unboxing this game will find players constructing the Action Crane, as well as several other components. It doesn’t take a lot of time to put all of this together, and the 3D pieces are optional and can be built later once players are ready to try alternative tiles included in the box. Once set up, the looming decision space of the Action Crane features front and center. It is brain-burning in the best of ways and allows players to stay invested as they wait to choose their next tile. There are multiple tiles that feature the same action, so you’re only locked out if you can’t pay for the tile you’d prefer. The main punishment is losing out on a corresponding bonus that would benefit your plans.

Praga becomes a game of efficiency, locating the correct tile, using it and the bonus to best effect, and getting as much out of these actions as possible before the turn is over. Over time, actions combo into other actions based on upgrades and bonuses. It all starts to click into place once this begins, though there’s always potential for efficiency to be hindered by poor draws from the hex piles or lack of resources. Thankfully, there is flexibility in the gameplay, which allows players to choose how to order their actions to maximize points and possibilities. Game flow is maximized by focusing on one area where you can perform well while dabbling in other scoring opportunities.

Do you take the King’s Road to construct the bridge? Focus on building tiles to help Cathedral scoring? Add more walls to the city to inflate your set collection points? There are so many options and as the game nears a close, you’ll realize there was never enough time to do it all.

You’ll certainly want to play again for the next strategy. And Praga features replay value in spades. The action tiles are double-sided to give variety to each game. There are also alternative Hunger Wall and Cathedral tiles and additional King’s Road tiles. Not to mention technology upgrades that can be acquired throughout the game and become your own asymmetrical player powers.

If all of that sounds like fun, well it is. But a game that has this much weight may not be right for all. There’s the possibility of analysis paralysis that forms as your brain spirals out of control from the options that emerge from each choice. The game also has a few fiddly areas that stop it from being a knockout.

While resources are tracked with the dials on the player boards, there are other tokens (blue and red for the Hunger Wall and Cathedral respectively) that could’ve used a similar tracking method, as well as windows (yes, another resource) that give more power to actions but are just another thing to keep track of independent of the player boards. The artwork is lush (by illustrator Milan Vavron) but muddled in the southern section of the board where you place buildings. And speaking of this section of the board, the area control aspect here becomes less engaging at lower player counts as it doesn’t do enough to tighten the space.

Once punched and played, putting the game back in the box is a chore, especially with the 3D components. This is a game that begs for an immediate insert and it’s a shame that more games don’t come with this option to protect the investment.

A final note on theme. Suchy did an amazing job of adding additional information in the rulebook to help players understand the landscape of Prague. There’s context given in a historical section, as well as asides that explain why eggs were chosen as a resource (an essential component of the mortar used to build Charles Bridge) and the significance of buildings on display in the city section of the board. These additions help highlight what more designers need to do to immerse gamers in their worlds.

Brain-burning action selection magnificence that’s only hindered by an overabundance of design ideas and lack of low player count attention. For me, Praga Caput Regni is a keeper for the collection, even at the two-player count. I’ll have my egg and build with it too.

Final Score: 4 Stars – Praga Caput Regni will dazzle you with its delicious decision space. Consider it a love letter from Prague to you, signed by designer Vladimir Suchy.

Hits:
• The central Action Crane mechanism is superb.
• The theme comes through and elevates what could be a rather dry Euro.
• Replay value based on variable paths and alternative tiles.

Misses:
• More effort could’ve been given to minimize resource tracking even further.
• The bottom half of the mainboard can be hard to distinguish due to the art style.
• The game begs for an insert to protect the 3D structures and make setup/tear down easier.