We review Pulsar 2849, a scifi board game published by Czech Games Edition. Pulsar 2849 is a "point salad" style of board game where players will have many opportunities to earn victory points during the game. 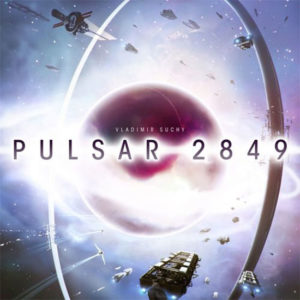 Space is one of my favorite themes for a board game. X-Wing Miniatures, Space Hulk, Armada…the list goes on.

The excitement of facing down your opponent be it in a starfighter or onboard a derelict vessel, making strategic plans and rolling dice to determine success of failure is just plain fun.

Pulsar 2849 (henceforth known as Pulsar) fits in this category as well….assuming your idea of a space themed game is not so much about combat but more focused on the cutthroat business of energy harnessing….

At least it has dice…

Pulsar accommodates between two to four players and plays between one hour and two hours. Here is a high level overview of how the game is played. For something more in-depth, you can download a PDF of the full rules here.

Each game is eight rounds in length, made up three phases:

At the end of the eight rounds, points earned during the game are added to end game scoring opportunities, such as goal tiles completed and the number of planetary systems with their stations.

As always, the player with the most points wins.

Wow. Just…wow. OK, let’s get the bad stuff out of the way. The following gamers will not like this game:

Ok, now that those Debby Downers are gone, let’s get to why I liked loved this game.

The Dice Phase, one of my favorite mechanics ever used in a board game. At the start of phase, six-sided dice are rolled and placed on the dice board on the space equal to its value. Then the median of the roll is determined.  Yes, you read that correctly…I said the median. I, too, had grade school math flashbacks. But the use of the median is brilliant.

Above the die spaces are two tracks – one that determines player order and one that determines engineering cube generation (more on this later). When players draft their two dice, the value of the die can impact their standing on one of the two tracks, depending on the die’s position in relation to the median. If it is below the median, the player can move one of their markers forward a track of their choice; the opposite is true if the die is higher than the median.

It is one of the best balancing mechanics for drafting I have ever played. Do you want to grab the high value die now and lose 1st position in turn order? Or should you draft low so I can move up on the engineering track? Almost everyone I played this game with absolutely LOVED this game mechanism.

Tense decision making does not end with the die draft. Balancing which action to do can be overwhelming. Remember I said you normally have two actions? There are spaces on your Headquarters and the technology board that show a red die with a value. Completing some transmitters allow you to link two completed transmitters together. The two sides form a red die with a value. These red die values can be used as a one-time third action. Finally, there are the engineering cubes. Turning in four of those allow you to copy the value of the undrafted die as a third action.

I quickly want to cover two other reasons I love this game. First is replay value. There are four double sided Headquarter boards. There are six double sided technology boards of which only three are used each game. There are six double sided goal tiles of which only three are used per game. Sixteen of the seventeen planetary system tiles are used each game and are distributed randomly. And, of course, there are the die rolls. You can have a game where the rolls are low almost the entire game, leading to a tighter game or you could have many high rolls leading to more scoring opportunities.

Of course, you can modify your die rolls by using die modifier tokens, which, although not a unique mechanic, is another reason I love this game. You can buy these tokens as an action instead of doing one of the actions I mentioned above. While not optimal, it can simplify your draft decision in a future round.

I think it is very clear that I love this game. So what are the blemishes? For me, the only (minor) issues would be AP with new players and playing with four players. The game can really take a long time with four new players as there is no scaling of the game length based on the number of players. A two player game will take about half as long as a four player game.

Finally, I am not a math major, but I am sure, this being a point salad game, someone will gronk out the optimal way to score points or figure out which is usually the best path to victory. I will be honest – in the many games I have played, I have won and lost using the same strategies, be it drop as many stations as I can or build as many gyrodynes as I can. I have not personally found that one scoring path is better than the others.

Pulsar 2849 is incredibly fun. The dice phase is an amazing game mechanic. In addition, balancing tactical and strategic decision making throughout the game is tense but entertaining. Finally, I found the replay value that is included in the game incredible.

I went in thinking it looked like an interesting take on dice drafting. I left knowing Pulsar 2849 is one of, if not the, game of the year for me in 2017.

Final Score:  4.5 Stars – An excellent dice drafting game that boasts loads of replay value and interesting decisions to make throughout the game.