Board Game Review by: :
Mindful Phill

We review, Pop the Box, a quick playing filler game from Blue Orange Games. We all know the relaxing feeling of popping bubble wrap bubbles and Pop the Box adds that to the familiar gameplay of Shut the Box. 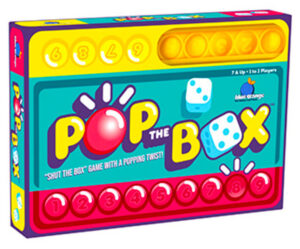 We all know the relaxing feeling of popping bubble wrap bubbles. We also know that luck-based games that provide small positive rewards consistently can keep us engaged. Combine both, and you get Pop The Box, a highly addictive game.

Pop The Box is a riff on the traditional gambling game Shut the Box, a dice game that dates back to medieval times. Shut the Box originates from medieval Britain and is thought to have been brought over by French Norman invaders. The game was originally played with dice and a wooden box with nine numbered compartments, each containing one or more pegs. The goal is to remove as many pegs as possible from the board, thereby “shutting the box.”

Pop The Box is a simple game that can be played with one or two people, and it’s a great way to pass the time.

Pop The Box rules are the same as Shut the Box; the main variations are the game’s aesthetics and unique design and that it can only be played by one or two players. Instead of tiles, players pop satisfying “poppers” that resemble bubble wrap bubbles.

All player numbers are up during the setup, from one to nine. With each turn, players roll one or two dice into the box. A player can roll only one die if the remaining numbers are six or lower. If not, both dice must be used. Any combination of open numbers that sum to the total dice value can be popped. A player continues playing until no combination of open numbers matches the total dice value. Each player scores the sum of numbers that are not popped at the end of every round. The player with the lowest score wins the round. Win three rounds to win the game. If a player pops all numbers at any time, the player immediately wins and finishes the game.

Simple rules can make for an exciting game; it is straightforward, quick, and simple to play. Pop The Box is an ideal filler game with almost zero setup, little downtime, and incredibly fast-paced rounds. Its simplicity makes it a no-brainer if you want to kill some time.

One crucial aspect of gameplay is material involvement, the experience of reacting to the visual and tactile aesthetics of the game components. The satisfying haptic feel of Pop The Box is a key part of the appeal of this game. The pleasant tactile feeling of popping the “poppers” can create positive feedback above other forms of player involvement. Another core part of the appeal of Pop The Box is its visual aesthetics. The game is carefully designed from its shape, vibrant colors, and pleasant soft materials to encourage play. As much as it is a dice game, it almost feels like the perfect stress-relief fidget toy.

A critical element that lies in the heart of Pop The Box is uncertainty through stochastic contingency (or randomness). It is designed to keep players returning to the game turn after turn, round after round. This experience is associated with the well-known “Brain Reward System”. The fast-play rate and consistently small rewards keep players engaged and playing, whilst the chances of popping all the numbers or getting a top score are tiny. Players continue to play and play even when losing, in search of the rush and intense feelings of pleasure that a lucky roll of the dice will trigger. As a turn takes seconds to be played, the rewarding mechanism, combined with the haptic appeal to the player’s senses, makes the game highly addictive.

Some people are not fans of uncertainty; they want to control every little aspect of a game. Others find luck and randomness to be compelling and exhilarating. Playability and variability have different means in game design for these two groups of people. Therefore, to enjoy Pop in The Box and its degree of replay value depends on which group you identify with.

Pop The Box is a love-hate game. Based on a gambling game, you can use dice roll probability to give you some advantage, but that will not guarantee you will score well in a round. There is not much strategy you can apply to this game than you would to a Blackjack game. Its simplicity may appeal or not to you, and such quick matches can make you think, “I will play just one last time!” or “This is such a dumb game!”. Hopefully, this review can help you decide. I am personally biased toward the “I love it!” crowd.

Final Score: 3 Stars – The unique aesthetics and appeal to tactile senses alone justify the game adaptation of “Shut The Box game with a popping twist”, as described on the game cover.

Hits:
• Highly addictive.
• Appeals to tactile senses.
• Unique, attractive visual aesthetics.
• It is a straightforward, quick, and simple game. Which can be great.

Misses:
• You may consider skipping this game if you do not enjoy luck-based games.
• It is a riff of Shut The Box without new rules.
• It is a straightforward, quick, and simple game. Which can be frustrating.