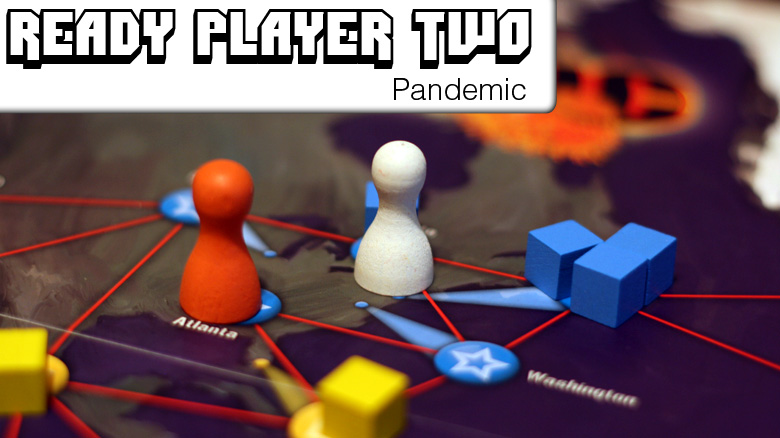 Alex: Hi! Welcome to Ready Player Two! This is a new column here at Board Game Quest is where Stephanie and I will take a look at board games from the viewpoint of how they play with two players.

Steph: Hey hon?  Shouldn’t we introduce ourselves to the nice readers first? Like how “Ready Player Two” was my idea for the column title?

Alex: Ummm…Hi, we’re Alex and Stephanie, a married couple from New Jersey with a passion for board games. She’s the creative one and…

Steph: …and he’s the one with the superior gaming-strategy mind.  It’s like competing against Watson, that Jeopardy-playing computer.

Alex: We tend to play board games with two players, so that was the inspiration for us to start sharing with you – to present and review games based on our experiences playing them. Better, dear? 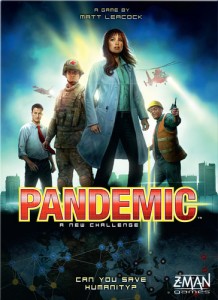 Steph: Much better. It’s great being married to a fellow gamer; gaming can spontaneously break out at any moment, and we both understand each other’s jokes. We figured we’d review a much-beloved game for our inaugural column: Pandemic. This is one of my favorite games to play with just two players.

Alex: Board Game Quest previously reviewed Pandemic, but we’re going to give you a fresh take on it from our own point of view. One of the most important aspects of the game, from a two-player standpoint, is role selection.

Steph: Picking the right two roles becomes yet another strategic decision to be made.  We will agonize over whether or not to include the Medic, weighing the game’s intensity level versus the various roles’ unique skills.

Alex: We have found that the Scientist/Medic combo is the most powerful to play, in that it makes finding cures and managing diseases as they pop up on the map. Researcher/Scientist is also strong because the Researcher can tag along and funnel cards into the Scientist’s hands for some quick curing. But in this combo, the risk of losing control of the map in the quest to create cures is a big one. Some roles don’t really lend themselves to being that powerful in a two-player game. Dispatcher may be the most powerful role when playing with three or four players, but it’s not the best for two.

Steph: I’m also prone to ignoring the Operations Expert in two-player mode.  Research stations are important, but the other roles can also build them. The Scientist, Medic, and Researcher’s skills are much more in demand.

Alex: I wouldn’t say that the Operations Expert should be completely ignored, because with two players, we’ve got to be able to move across the map quickly in order to deal with trouble spots as the pop up, and being able to hop from station to station is a pretty powerful ability.

Steph: Then you can take the Operations Expert. I’m never choosing that role in two-player. Scientist or Medic for me.

Alex: Whatever you say, dear. Anyway, what’s an aspect of gameplay that changes when you shift from multiple players to two-players with Pandemic?

Steph: Determining strategy when planning out our moves.  Having only two people involved in decision making is much easier to deal with than a three-way or four-way debate. Plus, married people know how to disagree very well, but we also make up even better.

Alex: Having only two-players really minimizes the “alpha-gamer” phenomenon that pops up in cooperative games like Pandemic. When it’s just two of us, we can discuss, debate and plan our movements, and if one person is getting a little bossy (more so than usual), it’s easy to point that out.

Steph: Maybe this is an obvious point to mention, but the gameplay moves much faster with just two players. Plus, it makes sense considering the theme. Rapidly-spreading viruses lends itself to quick gameplay. Multiple players can bring on analysis-paralysis which drives me insane. Literally. Alex has to dispense electroshock therapy to me.

Alex: This begs the question: is playing Pandemic with two players an easier game than playing with three or four? I would say it’s a definitive yes, as we have already established that there’s a clearer direction in terms of strategy. Combine that with each player starting with four cards and the group only having to worry about gathering two pools of resources, and you get a much easier game, in my opinion.

Steph: Definitely not. How many times has the game kicked our keisters? We’ve played games where we’ve lost in under ten turns. Our win-lose ratio has to be about 50-50. The game is challenging no matter the number of players. Again, an added bonus for the two-player option: difficulty remains the same no matter what.

Steph: So I’m never cute? What are you saying? But I would like to add that I do see one big disadvantage to the two-player mode. Two players can’t take advantage of the Bioterrorist option. It  may be a bit off-topic for us, since this is part of the On the Brink expansion, but it’s something we’ve only played once. For those of you who aren’t familiar with this part of the first expansion, the Bioterrorist mode switches the game from cooperative to competitive. One of the three-plus players takes on the mantle of “bioterrorist.” He runs around the globe, releasing nasty viruses. The sneaky part is that this player does not use a meeple to indicate his position on the board. He secretly keeps track on a separate map. The other players have to hunt him down and contain the virus.  Now you see why this can’t work with just two players.

Alex: I suppose an easy work-around would be to have one of us take on multiple roles, and the other one controlling the Bioterrorist. I don’t know why this never occurred to me before. Something we’ll have to try!

Steph: We’ve been playing this game for how many years and only now you come up with this idea? I thought I married you for your brains. Humph.

Alex: On that note, I think it’s clear that we highly enjoy Pandemic with two players, and if you’re looking for a board game to play with two, we highly recommend this one.

Steph: Just don’t expect this game to hit the table if you come to our house for gaming. Two players only. You’re more than welcome to play Catan or Battlestar Galactica with us, though! 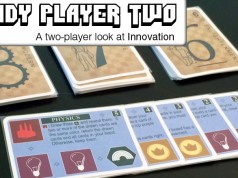