We review Pact, a hand and action management card game published by Iron Games. In Pact, players are trying to earn the most victory points by completing tasks. 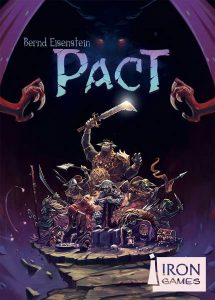 One of the most common ways people describe games when sharing a new game release with their gaming buddies is to relate one game to another. It wouldn’t be weird to hear Trains described as Dominion with locomotives. It also wouldn’t be strange to hear of Ganz Schon Clever described as “Gamer Yahtzee”. These associations bundle a series of mechanisms and/or themes into an expedient description.

This reviewer won’t spoil the association from one game to another just yet. Readers who can’t wait should skip to the Final Thoughts.

For those who relish the full read, the next game up on the chopping block is a goblin-themed card game called Pact. The story is a bunch of goblins have settled in a new land and now they must learn to work together to complete tasks to aid their society. In reality, it’s a 1-5 player card game of hand and action management. In some cases it could be considered semi-cooperative, but more on that below.

Turns in Pact are played continuously, but two core decks of cards are set up, a deck with Goblin symbol cards and a deck of Task cards. The Task cards have an increasing difficulty of completion across 3 seasons (Spring, Summer, Autumn) and each card lists a series of symbols that are needed to be “paid” to complete the task. These symbols match those on the Goblin cards. So, to complete a task, a set of Goblin cards are discarded or “used” by a player.

A typical turn involves each player taking cards from the Goblin card row or playing Goblin cards to their play area. Then, if they choose and have enough Goblins, they may complete a Task card from the card row. However, here’s where the “Pact” comes in. Players can choose to complete Tasks by using cards from their left or right-hand neighbor. If they do so, they place the completed Task card halfway between themselves and the appropriate neighbor. This is the general scope of the Basic Game.

However, in the Expert Game, complexity arrives from additional turn options. Now “Master Goblin” figures are available to play. These figures cost Goblin cards as normal and are played on top of existing Task cards that have been completed with a neighbor. These act like permanent Goblin cards which can be used to complete more tasks. In addition to this layer, a player now has a reserve of dynamite that is fueled by having a large variety of Goblin cards in their display. Players can spend this dynamite to eliminate the need for Goblin cards to be played for Task completion.

The reaction that is most common after playing Pact has been “Ok, that wasn’t bad”.

One of the reasons that reviewers might delay getting a review done or hem and haw over a review’s score is that a game is functionally fine, but generates no emotional high or low at all during play. The activities and challenges presented are operational, and not very engaging. Such is the case with Pact.

Pact’s other awkwardness comes from the component implementation. The card art is aggressive and colorful, competing heavily with the Goblin icons. More than one player has had to get a closer look at a card when sitting across the table to understand what icons are available. In addition, the dynamite and other optional effects in the game feel like been-there, done-that mechanisms that are implemented through even more cards. The whole physical production is streamlined and minimalist. As a result, it feels like there’s no connection with the exciting visual design.

On the flip side, there are some moments when players use their neighbor’s Goblins to complete a Task and that derails the plans of the opponent. Since the opponent is also gaining 1 point (rather than 2) this is not such a loss. The angst is quickly forgotten. In fact, it is this inequity between the effort for a Task and the scoring of a Task that makes the mediocrity of Pact all the more evident. As the game progresses, introducing harder and harder Tasks, the relative value does not increase.

So, in the end, the resulting comparison as alluded to in the introduction of this article is that Pact plays like “advanced semi-cooperative/competitive Splendor”. That might seem like a huge endorsement, but the playtime of Pact and the kind of complications it introduces overburdens the core simple design that makes Splendor popular. Even for this reviewer, Splendor is the more enjoyable game with the tactile chips and fast play.

Pact plays like an advanced version of Splendor where players can complete cards with the forced assistance of their neighbors. If that sounds cool, check it out. However, it could also easily be the case that the minimal production and goblin theme is a complete turnoff. Pact is a game that appeals to one gamer mindset on the one hand and defeats itself with the implementation on the other. It’s not a bad game, but it’s not a great game. It languishes in the mediocre middle between accessibility, depth, and playtime, resulting in a lowest common denominator experience. It’s basically fine.

Final Score: 3 stars – Pact is a fine game that plays somewhat like advanced Splendor, but on the whole, it’s not very exciting.

Misses:
• Long playtime for the mechanisms
• Disconnect between the art, mechanisms, and feel of the game
• Meager point scoring