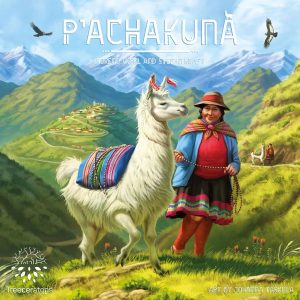 P’achakuna, means “textiles” in Quechua, a language found in the Andes. Peoples in this area have a long history of dyeing wools. Delivering these textiles to the remote areas of the Andes is no easy feat, but that’s exactly what you and your llamas will do in P’achakuna, an upcoming board game from Treeceratops.

P’achakuna is a pickup and deliver game for two players that takes about 30 to 60 minutes to play.

The goal for P’achakuna is to get every colored resource into your supply. Using your llamas and route-building skills, players will take goods to different villages to gain resources. But with the needs of villagers and the routes you’ll be taking ever-shifting, this won’t be a straightforward process.

After setting up the board, players will select which color llama they would like to be. This will determine which path the llama is able to travel upon. Black llamas will only travel in the mountains, while white llamas can only venture through the valleys.

On a player’s turn, they will take three actions: rotate a tile, travel along a path, and trade or purchase goods.

Players will select one tile to rotate once, but as the game goes on and players have more available resources, they can spend two of those to rotate it a second time. The only restrictions are that the tile can’t have a llama on it and it can’t have been rotated the previous turn.

Now llamas will trek upon their paths. Players must move to at least one other tile along their current continuous path. But if at any point they come across a village, their movement ends there.

Once llamas come to a village, a few possibilities can occur. Each village shows a different color on their rooftops. This indicates the type of resource the village has in abundance and which llamas will be able to acquire at the end of their turn for free. During setup, each village will be given a demand marker, which shows the large and small demands and never has a color matching the village. For instance, a demand token that shows red will never be assigned to the red village. On these demand tokens will be two colors, a larger one at the top and a smaller one at the bottom.

When a llama comes to the village with a matching color it’s transporting, if it’s the top color which indicates that the village has a high demand for that good, the player will receive two of that color for their personal supply. If it’s the lower color, they will receive only one. Once the transaction is completed, the demand marker is removed and replaced with a new one.

Players will have some other options in the villages as well. If they end their movement in a village where they do not have a matching resource on their llama, they can spend that resource to change the demand marker for the next turn. Whatever the choice, the llama will always receive the colored resource corresponding to the village they are in to be used in coming turns for further trading.

Players will have one last option in villages. Instead of trading, they can spend four of their resources to purchase an additional llama to help them speed up their deliveries.

If you’re into strategy with an abstract flair and a pickup and deliver mechanic, I think you’ll really enjoy this game. One of the most interesting aspects for me was actually the route forming. While a lot of pickup and deliver games typically don’t have a changing path, or if they do the changes are fairly minor. In P’achakuna this can always change, either by your hand or your opponents.

And they will because you will have to reach every corner of the board at one point or another throughout the game. What also makes this interesting is the path that your opponent has forged to reach a village will likely not work for you. That’s kind of the beauty of these tiles showing different varieties of land types.

As many of us now have reduced opportunities to play games and are limited to those at home who are willing, this game can fit a nice space. Limiting itself to two players will make it hopefully more accessible and because the strategy is light, even younger folks can join in. We were able to get our game setup, taught, and played in around an hour and future games will definitely take less time.

One last thing I want to touch on, that I will always appreciate in games, is the environmental consideration in the production of a game as well as the efforts made to support others. Treeceratops have committed themselves to creating games with a carbon-neutral footprint. Some people might think that’s at the expense of quality components. But if what I had sent to me is any indication of the final product, I don’t think there’s anything to worry about. The tiles were hardy and the pieces for the border fit together like a laser-cut puzzle. There are also two add-ons for backers that will allow them to receive products that will support Sunyana and Bolivia, where some of these products are made.

P’achakuna is a strategic and fun experience for pairs of gamers. It doesn’t hog your afternoons or tables. If you’re looking for a puzzly pick up and deliver game, this one is definitely worth checking out.

P’achakuna launched today on Kickstarter. If you are interested in picking up a copy, or just looking for more information, head over to their campaign page to become a backer.