No, you did not miss an Oathsworn Part One news article. But did you miss the original Kickstarter campaign? If so, today is your lucky day. Well, not literally today. October 18th is really your lucky day, because that is the day Oathsworn will return to Kickstarter with a new campaign to fund a second printing, an upgrade pack and a few other surprises to be revealed later. 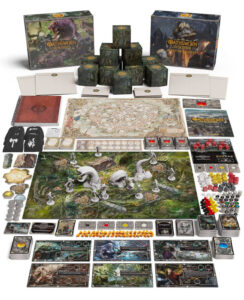 This cooperative, story-driven boss battler, published by Shadowborne Games, was one of the bigger campaigns of 2019, amassing almost $2 Million in total funding. Like the 95% of board games (percentage completely made up), the project was delayed due to COVID, with backers finally receiving their rewards in mid-2022. While I did not back the original campaign, I was lucky enough to nab one of the pledges made available at Gen Con in August. I have not played the game yet, but I have unpacked and organized the game and it looks amazing. The detailed instructions on how to organize the game in the HUGE core box (my core + two mystery chests pledge weighed FORTY pounds) should set a new standard for the industry.

If you are looking for actual thoughts on gameplay, Oathsworn is currently in the “Hotness” on BGG, has garnered a robust score of 9.3, and has several very positive reviews that can be read/watched. There are 12 characters to control, almost 500 items to loot, 84 events to experience and 21 chapters to complete. I cannot comment on the bosses as they are all hidden in boxes that are opened when the game switches from the story mode to the tactical battle encounter.

If this game sounds interesting to you, you can follow the campaign here. On a personal level, I hope that this campaign is very successful for Shadowborne Games. It is nice to see a smaller publisher using Kickstarter to create (or reprint, in this case) a game that could never have seen the light of day without crowdfunding.