We review Now Boarding, a cooperative board game published by Tim Fowlers. In Now Boarding, players must work together to fly passengers around the country as quickly and efficiently as possible. 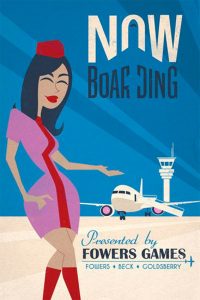 Whenever game designer Tim Fowers releases a new game, I always stop and take a look. From my favorite word game Hardback, to the cooperative puzzle that is Burgle Brothers, he always has a clever spin for his games.

Today we will be flying the friendly skies as we take off with Now Boarding. This cooperative game will have players harking back to the golden age of air travel as they attempt to deliver passengers around the US as quickly and efficiently as possible.

Each game is divided into 3 stages (morning, afternoon, and evening) composed of multiple rounds. Each round is divided into two phases: Flight Phase and Maintenance Phase.

During the Flight Phase, players must deliver passengers in real time. They have 15-30 seconds (based on player count) to take their actions. A player is allowed to move their plane a number of spaces equal to their flight speed. At any airport, they can drop off or pick up a passenger (assuming they have seats for them in their plane).

Players can also only move their plane on routes they have access to. Their movement can be split between drop-offs and pickups as much as a player wants. Once a passenger is dropped off at their desired airport, they convert into money to be spent in the next phase.

During the Maintenance Phase, any passengers still on the ground receive an anger cube. If a passenger get’s a fourth cube, they file a complaint. 3 complaints and it’s game over. Players can also buy upgrades for their plane. Faster speed, more seats, and access to restricted routes can all be purchased.

Once every player has purchased any desired upgrades, new passengers are dealt out (face down) to the airports listed on the back of their card. The cards will be flipped over during the flight phase so players can see where they want to go. This is also the players chance to plan for the round and decide who is doing what.

Once players have made it through all three phases, the game ends. If players can survive the game with less than three complaints, they win!

Now Boarding is one of those simple games that I didn’t expect to like as much as I did. I was of course intrigued by it based I how much I tend to enjoy Fowers’ games. But Now Boarding is probably one of my favorites of his designs. It combines pick up and deliver mechanics, with player coordination, action planning, and just the right amount of real time.

I say just the right amount because it’s easy for real time games to turn many players off. They can become a chaotic mess where no one really knows what is going on. But that doesn’t happen in Now Boarding. Sure the Flight Phase can get a bit crazy, but thanks to being allowed to plan everything ahead of time, it gives players a lot of agency to know what they will want to do.

Yet since the new passengers come into play face down, players won’t have perfect information to plan with. This not only keeps some mystery in the game, but it also helps prevent too much “quarterbacking.” Since players only have 15-30 seconds to make decisions during the flight phase, you have to trust your fellow players. Many times people will say “well I’ll head to Chicago and see where these two people want to go,” then they’ll take the ones that make the most sense for them.

Which brings me to one of the best aspects of Now Boarding; the player coordination. Especially in the early game, players just don’t have enough time to take every passenger where they want to go. Thankfully, passengers are just fine with layovers. Many times I’ll take a passenger part of the way, and let someone else take them to their destination. This is because you only have access to certain routes on the board. While you can still get everywhere, using the general routes can take forever. Now Boarding is all about action efficiency. I really loved the planning phase and working with my fellow players to try and figure out the best way to get everyone where they want to go.

While I truly do love this game, I did have a couple of minor gripes. One, the rulebook is unclear at times. We actually played our whole first game completely wrong, and quickly realized something wasn’t right, due to confusing wording in the movement section. My other complaint is that the game board feels too small. I’m not sure if this is a design feature or just a cost saving measure, but with 3+ players, I felt like we were smacking into each other’s hands during the flight phase way too often. I would have much preferred a bigger board with more space.

Finally, I didn’t mention it in the gameplay overview, but Now Boarding helps keep the variety in the game with both weather tokens and VIPs. At the start of each of the three phases, new weather hits the board. These tokens will change some routes to take longer (bad weather) and some to be quicker (tail wind!). VIP passengers add another layer of challenge to the game for those seeking it. These are special passengers that have unique rules, such as they will only fly alone, or demand a direct flight.

Now Boarding was one of my surprise hits of 2018 and has made a regular appearance at my gaming table. The gameplay is engaging and very accessible. I’ve enjoyed it with my gaming group and family members alike. The artwork from Ryan Goldsberry fits well and helps to set the theme of the game. Overall Now Boarding probably one of the best titles from Tim Fowers yet and I only had a few minor quibbles with it.

If you are looking for your next cooperative game, then Now Boarding should be on your radar. In fact, it even earned a nomination for Best Cooperative Board Game in our annual Board Game Awards this year!

Final Score: 4.5 Stars – An excellent cooperative game that mixes in pick up and deliver, route planning, and just the right amount of real time play.

Hits:
• Lots of decisions to make
• Cooperation with your fellow players is a must
• Real time aspect doesn’t hamper the game
• Options for increasing the complexity and variety

Misses:
• Game board feels a bit small
• Rulebook could be better