We review Hardback, a great combination deck building and word building game designed by Tim Fowers. Hardback is a followup to the wildly successful card game Paperback and takes the word building genre in a great direction. 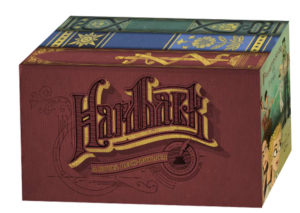 In 2014, game designer Tim Fowers was able to put fans of word building games on notice, there was a new sheriff in town. Paperback successfully combined word building with familiar deck building mechanics that had people saying “now why didn’t I think of that”.

Recently, Mr. Fowers decided to give the word building genre another spin as he teamed up with fellow designer Jeff Beck for their aptly named card game, Hardback. Word building. Deck Building. A game that ends in “back”? Did they just remake his previous game? Spoiler Alert: They didn’t, but read on for more.

Hardback is essentially a race game to be the first player to earn 60 points. Each player starts with a 10 cards deck of letters, eight identical and two random ones.

Each player takes a turn with the following phases:

1. Use your 5 card hand to create a word. ANY card in your hand can be played face down as a wild.
2. Score your word. Each letter will provide either fame points or money to buy better cards from the 7 card offer row. A player can also buy ink tokens at a cost of 1c per token.
3. Discard all played cards, any cards in left in your hand, and purchased cards. Draw back up to 5 cards.

The ink token are used as a press-your-luck mechanic. Before you spell your word, you can use an ink token to draw the top card of your deck and put it into play. The catch is, you have to use that letter in the word you spell. If you don’t, you get nothing for the turn.

Play continues in this manner until one player scores 60 points and wins!

OK, I’ll fully admit it, when I first saw the Kickstarter campaign for Hardback, I thought “I don’t need that, I have Paperback”. Well, as seems to be a common occurrence here, I’m big enough to admit when I am wrong. I’m not going to spend this review comparing and contrasting Paperback and Hardback, but if you are looking for the short answer, then yes, there is space on your shelf for both.

If Paperback was a mashup between Scrabble and Dominion, then I’d call Hardback a mashup between Scrabble and Legendary…and it works SO well. I think designer Tim Fowers has created my absolute favorite word game with Hardback. One of the reasons is because of how easy it is to make words. In many word games, I spend way too much time trying to figure out how to make something bigger than a 3 letter word, with varying degrees of success.

Since you can use any card in Hardback as a wild, it’s almost impossible not to be able to make a word. While you don’t score points for wilds, you can still get points from the other letters that you actually used. Although there are some card powers that will let you flip a wile and score off it. And since Hardback borrows on the great Legendary system for action combos, even a 3 letter word can get you some solid points.

Another thing I enjoyed was the press-your-luck mechanic of the ink tokens. There aren’t any cards that let you draw more into your hand, so the only way to make a word longer than 5 letters is by using an ink token. This doesn’t come without risk though, because if you happen to draw that Z or Q, you might have a hard time using the rest of your hand. It’s a risk vs reward scenario because sometimes you’ll have a great card in your hand that you really want to use, and a forced letter could torpedo those plans.

Hardback is also one of the few games where I like a little bit of downtime. Usually in a game, I want turns to go by rapidly so I can quickly get to playing again. In this game, I actually like playing at the higher player counts, as that not only has more turnover in the market, but it gives me more time to formulate a word.

Finally, Mr. Fowers has done a great job adding in a pile of variant cards. While we rarely use most of them, they do provide a lot of extra options that really helps to crank up the replay value. There is an event deck, unique player powers, ways to buy fame points, and even a fully cooperative mode. Some of these options work better than others, but all are welcome additions to the game for people that like variety.

Honestly, I had a hard time finding things to complain about with Hardback. If I were to nitpick, I could comment on how luck of the draw is still going to be a factor in the game. But that’s far from a deal breaker. It’s an excellent word building game that, while it’s not wholly unique, still manages to not only stand on its own, but provide an excellent gaming experience. That being said, if you don’t like word games in general, nothing here is going to change your mind as that’s really the core of the game.

But Hardback is full of great combos, excellent production values, and creative game play. It feels different enough from its cousin Paperback that I’m fine owning both, but if I had to choose one, it’d definitely be Hardback. I’ll never play Scrabble again.

Misses:
• Some may be turned off by the luck in the game