We review Middara, a dungeon crawler board game from Succubus Publishing. In Middara, players must work together to play through the massive campaign, upgrading and customizing their character as they go. 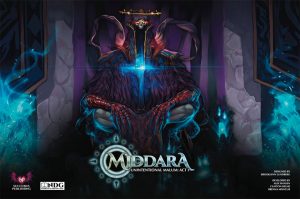 If there is a genre of board games I’m always adding to my collection, it has to be the dungeon crawler. Perhaps it’s from my decades of playing Dungeons and Dragons, but I always love grabbing a character, heading into the depths, and slaughtering some monsters. To that end, I was excited to check out the recently released Middara, a long awaited dungeon crawler from Succubus Publishing. This one funded on Kickstarter back in 2015 and has finally seen the light of day. Was the wait worth it? Let’s find out!

This will be a very high level overview of how to play Middara, for a full break down of the rules, you can get the rulebook here.

There are two ways to play Middara, Campaign or Crawl mode. For the most part, you are going to want to play campaign mode (more on that later). Ideally, you’ll have four players for a game of Middara, each of which gets to control a unique hero. Once you are through the learning scenarios, you’ll be able to kit out your character with items and skills to your heart’s content.

After you’ve read the lore and headed down into the dungeon, the actual crawl portion works out pretty smoothly. Each character and monster gets an initiative card, which are shuffled and dealt into a line. This will be the activation order.

On a character’s turn, they gain three stamina points to use (in addition to any they carried over from a previous turn). Stamina points can be spent to move your character, encounter objects in the dungeon, re-equip, dodge or counterattack (outside of your turn), or attack.

To attack, you roll dice based on your weapons and skills. All dice have a numerical value and some symbols. For every point you roll that’s higher than your target’s defense, you do a point of damage. Symbols rolled can be used to activate item/skill abilities. If an attack misses, the target can try and counter-attack by spending a stamina point. Spellcasting works in a similar way, except you roll a different set of dice and it ignores armor (and sometimes does special things).

Monsters are handled via a simple AI. Every monster card has a list of things the monster will do and you follow the list from top down. If it’s not possible to activate a line, you skip it and go on to the next line until you find a line you can activate. Their attacks work just like the hero attacks.

Throughout the crawl, you might encounter totems or chests that will have you referring to the scenario book to add in more tiles, monsters, or other story elements. But once you either accomplish the scenario’s goals or are all defeated, the mission ends and you go on to the next story mission. What scenario you play next depends on if you win or lose the current scenario. There is no replaying failed missions.

That’s a brief overview of the gameplay, but Middara has lots more to offer. I’m not even touching on different terrain types, status effects, unlockables, hidden text, etc…

With the glut of dungeon crawlers on the market today, a game really needs to work hard to set itself apart from what’s already been done. And for Middara, it’s definitely the lore and story that help this game make its mark. This is a game that is banking heavily on the narrative element drawing players in. The scenario book is some 500 pages! I kid you not, this book is thick and sometimes between missions, there will be 3-4 pages of a story. Whether this is a good thing for you or not will heavily depend on what your group wants from a dungeon crawler.

However, Succubus Publishing brilliantly helped alleviate some concerns in that area by releasing a free app that narrates the story parts for you. I know in our group, reading aloud large blocks of text doesn’t always go so well, so it was nice just being able to play the app and listen along. The voice acting in the app was remarkably good, even if the story itself didn’t always grip us (a little too much teenage drama for my tastes).

The scenarios also have hidden text (behind red boxes you use a decoder to reveal) which will be referenced throughout a mission. What this means is that even though you see the map ahead of time, it won’t be the whole mission. Many times more tiles will be laid out, monsters will appear, or treasure will spawn. The red reveal boxes were a great idea to help keep the surprise in a game where everything could have been spoiled ahead of time.

Once you get past the story, the next thing you’ll notice is the MOUND of content in the game. Seriously, this box is heavy. There are piles of tokens, tons of cards, miniatures, monsters, and booklets. If you want to play through the entire campaign, I could easily see spending 100+ hours doing so. Middara is a game you can play for the long haul. In fact, there are even sealed decks that you will open up along the way for some nice surprises (no spoilers though).

The story and content were good, but probably the thing Middara does best is the character customization. The game starts you with 4 characters, and after you get out of the learning scenarios you are allowed to customize them to your heart’s content. There are 5 different skill classes (called discipline trees) that you can use to create your character. And the cool thing is that when you level up, you don’t have to stick with just one class. Want to take a spellcasting skill and then switch to a martial tree? Go for it. And once you get past the skills, you have piles of weapons and equipment to choose from. I don’t think I’ve ever seen a dungeon crawler with this level of character customization. It’s pretty amazing.

All of the above is probably why you won’t want to play this as a one-shot dungeon crawler. From the story to the character building options, Middara is best experienced as a campaign. With just a one-shot, dungeon crawl, Middara loses a little bit of its shine. This is because the mechanics themselves aren’t the star of the show here. They’ve been done before. It’s everything else though that will keep you coming back for more.

While all the components are excellent in Middara (the dungeon tiles even have a Spot UV coating!), I will say that the rulebook could be better. It is very thorough, but it’s quite easy to miss rules in it. To prep for our first game, I read the rulebook and even watched videos online and still missed things. I can’t even tell you how much time I spent trying to identify each card and component type as I was originally sorting out the game. On that note, I should also point out that Succubus Publishing has already released a pile of errata for the game based on player feedback. So while it’s good they are updating things, I’m sure gamers will feel a little annoyed that the game they got in hands was already changed on day 1.

It was a long wait for backers of the original Middara campaign to get their games, but I feel like it was worth it. Succubus Publishing put together a giant, complete package that will entertain dungeon crawler fans for countless hours. The components are excellent, the art is well done (even if the style isn’t going to be for everyone), and the gameplay is rock solid. Just make sure your eyes are open to what kind of game Middara is.

As a straight up, once shot dungeon crawler, it’s not doing anything remarkable that will set itself apart from others in the genre. But if you are into story and character building, Middara is probably one of the best of the genre.

Final Score: 4.5 Stars – A dungeon crawler with a wealth of content and character customization. Come for the dice chucking, stay for the story and character building.

Misses:
• Rulebook could be organized better and is already outdated
• Doesn’t stand out as a one-shot dungeon crawler