We review Marvel United, a cooperative game published by Spin Master and CMON. In Marvel United, players must work together to rescue civilians, beat up thugs, and eventually take down the villain. 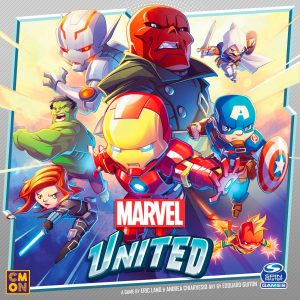 Hey there, you’re a Marvel fan, right? And you love board games? Well, I have a new cooperative superhero experience that we’ve been sorely missing… what’s that? There are other Marvel cooperative games? But this one has minis, so yeah. Perfect. Void filled. checks BGG Well crap. Is there dice though? Ha, got it.

Marvel United from Spin Master and CMON is a cooperative game for 1-4 heroes looking to test their mettle.

Marvel United allows players to play as some of their favorite Marvel heroes and battle against classic villains. The base game includes fan favorites such as Hulk, Iron Man, and Red Skull. The goal for players is to defeat the villain (what?!), but only after they have tackled some roadblocks the villain throws up.

Each villain comes with its own dashboard and deck. Six random locations are used in each game that offers a benefit to the heroes to help them reach their goals. Unfortunately, they won’t be able to use these until they deal with the threat cards the villain places over them.

On a player’s turn, they play one card from their hand to the line and activate the icons and/or text on the card. Then the next player goes. However, in addition to using their own card, that player gets to activate the icons on the card the previous hero played. Each icon will let a hero move, fight, or rescue a civilian.

Players will work together to remove threats, rescue civilians, and defeat thugs. You’ll have to do this a number of times before those missions are satisfied and more importantly before you can attack the villain. Players will have to complete 2 of these 3 missions before they can fight the villain. Players win if they are able to knock the villain down to zero health. But there are plenty of ways for heroes to lose: if the villain’s or heroes’ decks run out when they need to draw a card or if villains achieve their villainous plot.

Ok, I know I dogged on the whole Marvel thing a minute ago. I actually love Marvel heroes and before this year was religiously attending MCU movies with friends. And if you’re into Marvel like I am, certainly you’re at least going to see what this is about. It also has some cute chibi-style minis that people might want to collect and maybe paint (it’s CMON, did you think there wouldn’t be minis?)

Marvel United does some lighter strategic choices with cooperative actions that fit well for a game of this complexity. Aside from a hero’s ability to give another player an action token, they’ll be able to take the actions on their card AND the hero’s card before them. What’s cool is players can do these actions in any order they wish, even choosing not to do some of them. The strategy for players comes from deciding what card to play in conjunction with that previous card to maximize their contribution to the team.

Certainly, the limitation of playing only one card might frustrate some players that like the flexibility of playing more cards and having a bigger impact on their turn as in Marvel Champions. But the trade off with that is usually a longer game albeit with more strategy. I don’t think that holds Marvel United from still giving a strategic experience; it’s simply lighter and that might be appealing to a wider audience.

I also liked the variety of heroes to pick from. Everyone’s decks have different ratios of icons on their cards acting as their unique contribution to the team. This gave some challenges in who could help in which way, but everyone still could make some difference. Talking with the people next to you is definitely encouraged. While I enjoyed the different heroes to pick from, I was a little underwhelmed by the villains.

It’s recommended to play your first game against Red Skull, as he’s pretty basic. I agree he’s great for that first game, but he’s also kind of boring after that when you consider the other two villains who are much more interesting. Because I’m not personally inclined to play against Red Skull in future games, I feel a little limited in my villain options now in the base game. I wish they had thrown in just one more villain to help the variety. But that’s probably how they get you to buy expansions. Smart.

I’m also a big fan of solo games and having that option in a game. Unfortunately, I didn’t find the solo mode all that interesting. The rules don’t change much from the multiplayer game. You’ll pick three heroes to play with and you’ll combine their decks and will start with five cards instead of three. Everything else plays like a normal game except if you’re ever KO’d (discard all your cards in your hand), you lose. The only benefit for me was getting to play with more heroes, but I’ll probably not play this solo in the future.

Overall, I think Marvel United is a fun, light cooperative game. It doesn’t have the depth of strategy I personally like; for that, I’m defaulting to Marvel Champions. But I could break this game out with my nephew, he’d get into it and we’d both have a great time. It’s not too overwhelming with rules or complex instance conditions and the playtime is perfect for this weight of a game. Sure, I wish there was one more villain to keep me satisfied a little longer with the base game, but it’s good to know that there’s more content available for Marvel United if I so chose to venture down that route.

Final Score: 4.5 Stars – Another Marvel game that offers a lighter cooperative experience that will appeal to a broader audience

Hits:
• Fills that Marvel-needed-in-everything gap
• Cool minis
• Chock full of expansions for you to throw money after your favorite character not included in the base game
• Lighter strategy and rules makes it a good fit for those looking for a cooperative game that’s not overly long

Misses:
• Needed at least one more villain that was more interesting
• Solo mode was kind of bland