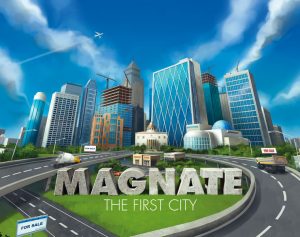 Residential brings in commercial businesses. Industry creates jobs drawing in more residents. Commercial gives those industries a place to export their goods. This symbiotic relationship is the basis for the last few decades worth of SimCity games. But today we are looking at Magnate: The First City which uses a similar premise for budding real estate developers. You’ll buy and develop land, find tenants, and flip it for a big profit to move onto your next investment.

Live on Kickstarter today, Magnate: The First City is a city-building game for 1-5 players that plays in about 90 minutes.

During Magnate, you’ll be buying plots of land, building on those areas, and hopefully attracting tenants to pay you some rent and increase the value of the property. Each round consists of four phases.

To begin, players will bid for turn order. This is a standard around-the-table auction where players can increase the bid or pass. Once all but one player has passed, the remaining player will pay their bid and become the first player for the next round. This can be critical to get the first crack at the available land for sale or to be the first one to attract tenants to their buildings.

Next, if you have any buildings that haven’t reached capacity, you will attempt to attract tenants. The available tenant pool is limited, but so long as they are available you will roll dice trying to meet certain requirements to get the tenant to move in. The number of dice you roll is different for each building. Residential buildings, for instance, you’ll roll either the number of nearby offices or retail buildings (whichever is less) as people need both jobs and places to shop. For industry buildings, you’ll roll the lower of the nearby industry or residential buildings as they require local suppliers and the workers to run their business.

There are other bonuses and penalties that may come into play. Placing a residential next to a park will give you a bonus to the results of the roll. If you try to build an apartment next to a factory, however, you’ll incur a penalty when trying to attract tenants. Once you’ve attempted to fill each building, all tenants that have moved in will pay rent. Each type of tenant pays a different amount, but you’ll immediately add it to your available cash on hand.

Players will then each have the opportunity to take three actions. The available actions are:

Selling is the goal of every property you invest in. When you sell, you get paid the current land price multiplied by its value. Its value is calculated as a base value of 1, plus 1 for a building, 1 for each tenant population, and 1 for additional neighbor bonuses. This can mean selling for upwards of 5-10 times the current land price if everything comes together.

Finally, you’ll end the round by taking care of some upkeep. Depending on the number of sales made and the number of advertising tokens used, the land price will start climbing. You’ll also potentially be drawing risk cards that show the impending doom of the housing bubble you are working with. Each risk card will move the crash marker down its track and once it gets to the end space the game is over. The land price will drop immediately based on the value of the risk cards and all remaining property is sold at the new, much lower, value. At that point, whoever has the most cash is the winner.

Magnate: The First City certainly feels a bit like SimCity when you read the rules. But in practice, you feel much more like one of those cutthroat HGTV people trying to slap some paint on the walls and sell a house for three times what you’ve invested in it.

Sure, you can hold on to your properties and keep collecting rent like you are the Monopoly man, but you won’t be getting rich quick. And that is what it is all about here. Not a stable income but a quick buck and hoping you can sell everything off before the crash happens.

There is a lot of strategy going into what you are doing each round. Building one type of building can have a major impact on the desire of tenants to move anywhere in that neighborhood. No one wants to live next to a factory. So if your opponents build a shiny million-dollar apartment complex you certainly are well within your rights to put some industrial buildings right next to it. You’ll make it harder for them to get residents—which in turn may hurt your building’s prospects if they can’t find enough workers. But maybe you’ll just out-advertise them and not have to worry as much about it.

The thing I enjoyed the most about Magnate is how much interaction there is between players and how much is within your control. While the tenant-attracting phase does have you rolling a lot of dice there are plenty of options to mitigate those die rolls. If you don’t get filled to capacity immediately you’ll have to balance the cost of waiting to sell until the next round with the opportunity cost of just selling for what you can now and reinvesting elsewhere.

Even how quickly the land price increases (and the market crash comes) is somewhat up to the players themselves. The number of sales and advertising play a large part in how the market is adjusting. So if you want to try to slow down or speed up the implosion of the market you have some tools at your disposal for doing so.

If you’ve ever wanted to be a property-flipping genius, Magnate: The First City is certainly a game for you to check out. The mechanisms come together in a way that makes perfect sense thematically and still creates a fun experience on the tabletop. You’ll get to battle your friends over the limited pool of land, buildings, and tenants and try to sell as many properties as you possibly can before everyone comes to their senses and sends the price of everything to rock-bottom.

If Magnate: The First City sounds like the type of game you’d enjoy, it’s now in funding on Kickstarter, so head over to the campaign page for more information, or to become a backer.