This week, Wizards of the Coast has released their newest version of their Magic: The Gathering digital game. Magic 2014 is now available for Android, iPad, PS3, PC and Xbox 360 for your card fighting needs. The new version has become a yearly offering from WOTC. I have bought the iOS version in the past and found it to be a lot of fun and a good Magic experience.

The base game is free on iOS and includes:
• 3 decks, each with 5 unlockable cards
• Single-player campaign across the plane of Shandalar
• One Planeswalker duel
• Sealed Play mode; explore a deckbuilding experience 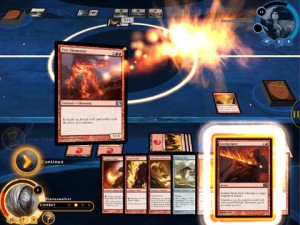 But if you really want to play Magic 2014, you will need to make a $10 in app purchase that will unlock most of the game for you. The free version is more of a “get your feet wet” trial. I played a lot of Magic: The Gathering in my youth and, unfortunately, spent a lot of money buying booster packs of cards. While Magic 2014 will end up costing you some money, what you spend will be only a fraction if you were to get the card game. Plus, you don’t have to worry about finding someone to play against. Magic 2014 offers a campaign mode, puzzles, different play styles and sealed play (new this year). I’m pretty excited to try sealed play as deck building has been something the Magic app has always lacked.

No matter your system, plan on spending about $10 to get the full Magic 2014 experience (even more with the additional DLC).