We review Layers, a family friendly board game that will have players trying to create patterns out of cards with holes punched out. 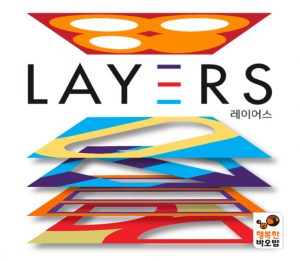 Up? Turn? Flip? Is that red with red or red with green? Down? Are those stripes?

Like a bizarro maze, Layers might have you turned around a little backward, sideways, and maybe even upside down. Can you figure out the pattern and stack your shapes in time?

Layers is a pattern building puzzle game for 1-4 players. It plays best with 4 players.

Each player is given a player board and 5 layers – square sheets with a series of windows and patterns on each. Mission cards are shuffled together based on their level, and 2 cards are drawn from each. They are then stacked in double ascending order – 3 4 5 3 4 5.

At the start of each round, scoring tokens are placed out based on the number of players. When all players are ready a mission card is flipped, revealing a pattern. The players then compete to see who can be the fastest at recreating that pattern. The mission card level corresponds to how many pieces will be needed to recreate that pattern.

Once a player thinks they are done, they take the highest score token available. The next completed gets the next highest. When there is one token left, that player has ten seconds left to finish the mission and earn the final token.

The players then restart, and the game advances through 6 rounds total. After the final mission, the players total up their tokens. The highest score wins!

Layers has a fun concept and the colors are lovely, but overall it’s far more geared towards teaching elementary aged kids pattern building than an actual game. Beyond recognizing the mission card pattern and recreating it, there’s not a ton of substance here.

Additionally, I think this struggles as a family game – the younger, somewhat slower people I played with were inclined to get frustrated as each round they struggled to complete a pattern while the older folks slapped it together in just a few seconds. And even the youngest recommended age (7) knows that when they’re getting all 1’s and someone else is getting 3’s and 4’s the scoring isn’t going to work out in their favor.

I did appreciate seeing how the simple patterns and shapes could be something entirely different when stacked. And making the layers out of sturdy plastic was a great idea – paper and speed games aren’t a good mix.

Layers could be improved with additional complexity. More complex missions and limited scoring tokens would up the difficulty. Or add a team variant, where each only has half the layers. Ultimately this felt like a concept that would have been part of a mechanic in another game.

Layers suffers from being a game that’s strictly for a single age group or a group with similar pattern recognition/ability. Unfortunately, this isn’t an all-ages game one could enjoy with their tots. At least the well made components in Layers will stand up to what kids throw at them. However, a few variants could go a long way.

Final Score: 2.5 Stars – A cute concept that paints itself into a corner pretty tightly.