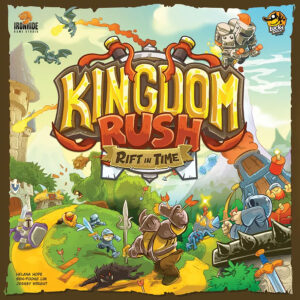 If you own a mobile device, chances are you’ve heard of the tower defense game Kingdom Rush. There have been a few iterations of this game, but the gist of it is that you are setting up towers along a path that hordes of enemies travel. You need to use your towers and hero to wipe them out before they make it to your kingdom. It’s a fun game that can definitely suck you in for longer than you’d expect.

If you are a fan of the series and hoped someday to be able to play the game on your tabletop, then today is your lucky day. Publisher Lucky Duck Games has brought us Kingdom Rush: Rift in Time, their take on bringing this mobile game to your table in a 1-4 player cooperative experience.

Kingdom Rush takes place over a 10 mission campaign that slowly ramps up in complexity. Each player will control a unique hero and have a hand of tower cards that they can build in specific locations around the board. A typical game of Kingdom Rush takes place over multiple rounds, each of which is broken up into six-phases. I’ll give you a high-level overview of the gameplay here, and if you want the full details, you can download a PDF of the rules from Lucky Duck Games’ website.

Each round starts with new horde trays spawning. These will contain monsters that need to be covered up with polyomino shaped tiles or hero miniatures to be defeated. During the main action phase, players will place their towers on a building spot, which lets them use their damage tokens to cover up monsters on a nearby horde tray. Cover up all the monsters and the tray is defeated, earning players a crystal to their pool. These can be used to buy more towers at the end of the round. Any towers not played that round can be passed to a fellow player, which allows them to be upgraded to their next level (4-5 levels of towers) and be used in a future round.

After player actions are finished, defeated horde trays are removed, with surviving ones advancing one or two spaces towards the exit. Any that make it through the exit will damage your kingdom. If the kingdom loses its last life, then its game over. Finally, tower cards are picked up and returned to the players that played them.

The main goal of many of the missions is to destroy the portal cards. These can only be damaged by towers (not heroes) of a high enough level. However, the kicker is that any towers that shoot a portal are destroyed at the end of the round. If you can destroy all of the portal cards though, you’ll win and can move on to the next scenario.

I’ve always enjoyed tower defense video games and I’ve played quite a bit of Kingdom Rush on my iPad. So I was curious about how Lucky Duck Games would bring this action-packed game to the board gaming world. Interestingly, instead of a fast-paced game of horde killing mayhem, it’s more of a strategic, puzzle-like experience. In that regard, Kingdom Rush reminds me a bit of Under Falling Skies where I was expecting something more exciting and ended up with a thinky affair that has you puzzling out how best to use your limited resources.

To that end, I did find a bit of thematic disconnect between the video game source and this tabletop game. Towers aren’t really placed and then improved, but are used once and then returned to your hand at the end of the round. The only way to improve them is not to use them. I also found it more frustrating than fun that only towers, not heroes, could attack the portal cards (more on that later).

But that all being said, the polyomino tile mechanic was pretty neat. Each tower shoots out its own shape and type of attack, so players have to carefully judge when and where to place each tower. Do you use the tower this round to get a kill or save it for the next round to upgrade it? As the campaign progresses, you’ll also face more unique hordes that do things like heal between rounds, are immune to certain damage types, and injure nearby heroes.

Speaking of the heroes, I really enjoyed how unique each of them is. You can play the squishy ranged guy that has an animal campaign, or the big bruiser that smashes things with melee combat. Each hero has its own attack powers and tiles that really will have you trying to create the most effective team.

Overall, I think Kingdom Rush is a well-thought game with some really cool mechanics, but my biggest knock against it is just how hard it can be at times. In fact, the first mission took us a few tries to beat before we eventually went down to the easiest level. I would have thought that the game would wait to ramp up the difficulty until we had our feet wet a bit, but nope. We were thrown to the wolves right away. We did eventually beat the mission, which is good, but most missions we lost at least once before winning. Kingdom Rush can be punishing at times, especially for new players.

That being said, the game does give you a few levers to adjust the difficulty. I’d highly suggest players start at the lowers setting until they really get a feel for the game. The other thing I wasn’t a huge fan of was how the portal cards work. These can only be attacked by towers, not heroes, and some require you to have level 2-3 towers to even attack them. I really enjoy the feeling of upgrading my towers and improving my position in a game, so it’s frustrating for me to lose all the progress after attacking a portal card. It takes me a couple of rounds to get a level 3 tower that’s really powerful and then to lose it after shooting a portal card isn’t very fun. I think I understand why they went this route, to help stamp down the power creep, I just am not a fan of this type of gameplay.

I think Kingdom Rush: Rift in Time is a well-made game that will definitely appeal to gamers that want a thinky game that needs a solid strategy to win. Kingdom Rush definitely has a bit of complexity to it that only increases as the campaign goes. Is it actually too complex for what the game is? I guess that depends on what you are looking for in a tower defense game. If you are looking for a frantic dice chucker where you are having constant battles, you might be better off with something like Planet Apocalypse. However, if you want a brain burner that feels like a puzzle that needs to be solved, Kingdom Rush: Rift in Time might just be in your wheelhouse.

Final Score: 3.5 Stars – A unique tower defense and tile-laying game that will require a lot from players if they hope to win.

Misses:
• The game can feel too difficult at times
• Wasn’t a fan of how the portal cards work