We review Planet Apocalypse from Petersen Games. This balanced cooperative game pits earthly heroes against a demon lord and its never-ending army of hellish minions. The heroes must stop as many minions from invading earth and defeat the demon lord to route the forces of hell to win. 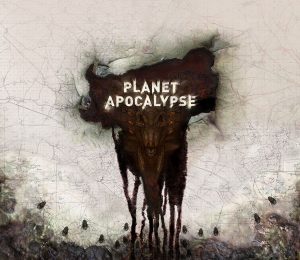 I’m a sucker for post-apocalyptic themed boardgames. I mean I shouldn’t be and with all things currently going on in the world and I like hot water, cold beverages, and indoor plumbing. I blame growing up with movies like Night of the Comet, games like Twilight: 2000, or comics like Marshal Law; those influenced me and made me love this genre.

This brings us to Planet Apocalypse from Petersen Games. It’s the End of Days and Hell is invading the Earth. This cooperative, dice game has 1-5 players battling the forces of Hell. They are trying to defeat the Demon Lord to stop the invasion and save the world. Is Planet Apocalypse another post-apocalyptic game I should add to my collection? Read on!

To begin with, players choose a map (either Doom Gate or Invasion) and set up the various tokens and trackers. The main adversary in the game is the Demon Lord Baphomet who has its own lord sheet. Players will select a unique hero, each of which has their own special abilities and flaw.

The game takes place over the following phases:

1. Team Phase: a player is determined the captain for the turn and goes first, plus they also decide which heroes and Hell forces are targeted by attacks. Each player can take any of the following actions by spending courage: recruit troops, first aid, purchase gifts, and renew.

2. Hero Phase: each hero can take the following actions in any order: attack, move, set an ambush, or hero/gift special actions.

Important things to note: if any hero or troops are in the same area as an invasion spawn token, minions will spawn in that area. If any demon minions are killed heroes gain courage or courage is added to the courage pool.

Hell time: if a hero moves onto the Lord’s shadow token, the Hero phase is paused and hell time begins. The hero can bring other heroes and troops to fight Baphomet.

3. Enemy Phase: Despair counter and the lord track move on the control panel. If the despair track reaches 1, add another despair die & 4 courage is added to the respective pools. If the Lord track reaches 1, move Baphomet 1 area toward the heroes’ start area and spawn a 4th circle demon in its space. Then Demon minions attack enemies in their area and then move one area toward the heroes’ start area. Lastly, a new invasion token is placed in the Lord’s area, and ambushes in any areas are resolved.

Important things to note: minions are spawned using the despair dice and, for each pair rolled, the corresponding demon is placed along with larvae for each demon. If any minion or spawn token reaches the heroes’ start area, the doom tracker increases.

End Game: players will lose if the doom track reaches 13 and if Baphomet reaches the heroes’ start area. Players will win if they defeat Lord Baphomet.

I’m sure it comes as no surprise to most gamers familiar with Petersen games, but the production values of Planet Apocalypse are amazing. The miniatures are all, of course, well-sculpted, and the demon Lord and minions are cool and disturbing all at once. But what most should also know is that the rulebook, maps, and various boards and panels feature thematic and exceptional artwork from artist Keith Thompson that fits the game well. The rulebook is also filled with information of 4 expansions giving detailed overviews but also detailed lore of all current heroes, demon lords, and demon minions.

Another detail that was a welcomed surprise is that Planet Apocalypse is a well-balanced coop game. Overall, this is a difficult coop to win but it’s not impossible. Your heroes will upgrade as you purchase gifts, gain additional powers, purchase troops for more ambushes and patrols, and the game challenge increases as heroes become stronger. Planet Apocalypse mechanics such as the despair and lord track increase the challenge level as the game progresses. As the despair dice pool increases, it spawns more minions and as the demon lord moves, it reduces viable areas of the maps and acts like a timer that is one tick closer to invading earth. These elements will keep players on their toes and create a great balanced cooperative experience.

The Planet Apocalypse base rules are challenging but I love the fact that if you so choose, you can increase the difficulty level through multiple options. First, using the Doom Gate map which is circular and adds more difficultly because hell forces are not removed but instead circle the board like vultures. Second, you can also increase starting and game difficulty in various ways by using the hard, hellish, or nightmare rules. These rules have you add more dice to the starting despair pool, draw demon lords in secret, increase the lord’s starting values as if you were playing with +1 player, or even begin to play with a 4th level minion on the lord’s space.

The last thing I really loved was the heroes, especially after reading the lore on each. They are humanity’s best hope and each is flawed in some way. All have beneficial powers to gain but their flaws stay throughout the game. Their upgrade track is unique to each hero so as they gain gifts, they can also gain added powers as well. Also, if the hero is reduced to 0 health they die, but the player is not eliminated but instead chooses a different hero to use. The problem is that you just lost all those great gifts and the new hero might not be best suited to face the games current challenges, but they can still support the others.

My only negative is that the core game only comes with 1 demon lord and the 4 expansions listed in the rulebook all have 2 additional plus new game content. Now, Baphomet is no push-over, but this does limit your game variety and so you might feel inclined to buy more expansions because each lord plays different according to the lore in the core rulebook. So, while the rulebook is informative it’s also enticing to encourage additional purchase(s) to add variety to the core set.

If you want to play a challenging, cooperative game, then Planet Apocalypse is definitely worth checking out. The excellent production values and balanced gameplay should make any gamer happy. If you want to increase the difficulty, the game comes with multiple rules to do so and includes flawed but cool heroes that can upgrade to match most challenges.

The only issue with the core set is that having only one demon lord limits the game variety. Some gamers might not be able to justify purchasing more content because of the high cost. There are currently 4 expansions that would instantly add more demon lords and content to the game, but these require additional purchases.

Misses:
• Only 1 demon lord in the core set