We review Incantris, the spell slinging, dueling minis game from Rainn Studios. In Incantris, players are casting spells in the hopes of taking out their opponent's team of wizards. 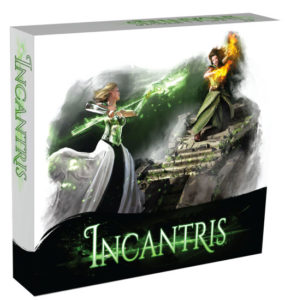 There are two types of games that have been around a while: skirmish miniatures games and wizard dueling games. Skirmish miniatures games like Chainmail, Warhammer skirmish variants, and Heroscape are big affairs involving considerable preparation time. Wizard dueling games are also fairly popular with Magic: The Gathering, Mage Wars, Summoner Wars, and even Wiz-War all having a niche of expertise. If any game is going to enter these two domains, it has to bring its A-game.

Incantris is a skirmish-based, wizard duel game for 2-4 players that takes about 30 minutes per player. It plays best with 4 players.

Incantris provides a decent variety of game setup options, including a straightforward arena battle, capture-the-flag, sap the crystals (similar to CTF but resource depletion), and shifting arena (moveable terrain). With the addition of the extra miniatures from the Kickstarter, it also allows for multiple wizard types for each player color and cards to fully customize the spells for each wizard.

Once your arena and battle conditions are set, turns proceed round robin with each player activating one mini. Each mini can perform a move action and a spell action (in any order), which is one of the 2-4 spells they are allocated during the setup.

Casting a spell is a very straightforward affair. The casting player will roll custom 8-sided dice (depending on the spell) attempting to get as many green wand symbols as possible. The defending player(s) will roll the same dice, the number of which depends on the attacking wizard’s type, to defend. If the defender rolls enough ward symbols (again, depending on the spell), the effect is lessened or negated.

The type of wizard casting (i.e. Astral, Spiritual, Elemental) and the type of wizard defending form most of the strategy with the attacker always attempting to maximize damage against an opposition type. Other strategies focus on utilizing the movement range of wizards and their spells to gain an advantage on opponents.

Once a player’s full team of wizards is defeated, that player is out of the game. This, or other arena-setup conditions, determine the winner.

The statement above bears repeating. If any game is going to enter these two domains, it has to bring its A-game. Incantris does not.

One of the key things that’s immediately noticeable in spell casting is that there is no resource management with spells. Each spell can be cast repeatedly by wizards with the only limitation being the number of turns. If a wizard wants to cast meteor swarm with every activation, that’s possible. Besides the time limitation, each wizard also only has a repertoire of 2-4 spells, so choosing an action is pretty basic.

The other main complaint is that some wizards don’t really act like wizards. They’re more fighter-wizard hybrids with the emphasis on the fighter. Their focus is to get up close with the enemy and attack at melee range. This sounds like a good variety of unit types, but it leaves a lot to be desired. A more engaging variety of spells, which would probably raise the cost of the game, would have been nice.

Another issue is with the terrain included in the game. There are multiple terrain pieces, but the intent is clearly to keep the game light and fast, with few terrain features providing complex mechanisms. Terrain either blocks line-of-sight or movement. For example, there are no damaging acid pools, death-causing lava, or rocks to climb on. This two-dimensional focus eliminates the need for a lot of rules and components, but that also strips some of the strategic fun.

The final main thing that really makes for the non-enjoyment of Incantris is the repetitive nature of battles. Even with alternate battle rules or arena setups, many actions in play feel obvious and unimaginative. There’s little to explore from multiple plays, even with such a variety of game setups.

It’s unclear whether Incantris intends to compete at the level of the games mentioned in the introduction, but for gamers, this is a big concern. There may be a market for a light wizard battle game, but it’s the lightness in Incantris which makes for the simplicity and uninspiring play. It’s possible expansions will fix this, but on the outset, there’s little to enjoy.

Final Score: 2 Stars – It works, but out of the box Incantris is too shallow an experience in what is already a competitive genre of gaming.